By Craig Cole
(Jan-Feb 2019) – 2019 was a good year for Port Stanley. The amount of new housing in the village is significant, and we have an impressive new cement walkway around the harbour, lined with heritage signs. New businesses have opened, and the idea of a Heritage Conservation District for the central core of the village is being re-examined.

How about 100 years ago? 1919: that was a good year too. The First World War was over, and the servicemen from Port Stanley were starting to return, albeit slowly. The St. Thomas Times Journal, which had started daily publication the year before, in 1918, reported that in 1919 the Port Stanley IODE (Imperial Order of the Daughters of the Empire) suggested that the Chapter undertake to “build a hall as a memorial to our boys who went overseas, five of whom have paid the supreme sacrifice.” It would take the form of a community building around which the social life of the village would centre, and a plan was submitted which combined auditorium, reception hall, box ball alley and moving pictures. The first motion picture studios were introduced in the late 1800s, filming in black and white. Technicolor was not introduced until the 1920s, but perhaps any sort of movie would have been a novelty in Port Stanley.

The accompanying photograph is from a postcard postmarked 1920, and illustrates what the major street in our village, Bridge Street, would have looked like 100 years ago. The first automobile arrived in Port Stanley in 1910. Ten years later, as can be seen in the photograph, there are several automobiles on Bridge Street, but also a horse and buggy. F.R. Dales store on the southwest corner of Bridge and Main streets sold groceries, as did Finlaysons on the north side of the street. The bridge in the background preceded the current lift bridge. Perhaps sail boats could not reach the inner harbour in 1919, but at least pedestrians (and cars) could cross the creek.

As far as weather was concerned, the winter of 1919 seems to have been relatively mild. The Times Journal said, “The skating all along the river was never better than it is now and many of the older skaters here are enjoying this outdoor sport along with the young. A few from the cities are coming down in parties, as the ice in the rinks has not been up to the standard of other years for skating on there.” I guess this means that the skating rinks in the cities, probably St. Thomas and London, were not in very good shape. 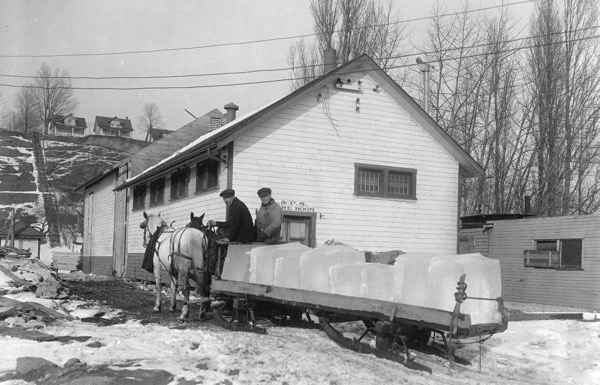 The article goes on, “One of our young girls, while skating with a friend from St. Thomas, received a very cold winter’s bath when they skated over thin ice near the large icehouse on Friday, and both went through up to their necks. With the assistance of other skaters who used planks they were soon brought out to solid ice again. This is the only place along the river where there is any danger, as it is where the water main was repaired. Mr. Countryman received a bad cut over the eye when he was accidentally thrown on the ice, but the wound is doing nicely.”

Another story talks about two horses which broke through the ice on the creek while they were hauling ice from the creek for the many ice storage houses which lined the harbour. The horses broke through the ice and were rescued “with great difficulty.” It was tough being a horse 100 years ago. All those bloody cars on the road and when you tried to make an honest living
harvesting ice, the ice collapsed.
. 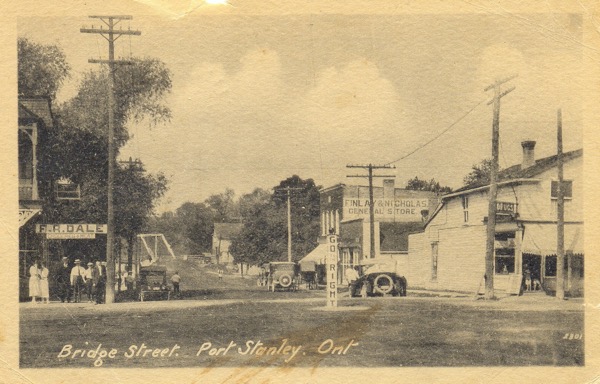 All events did not turn out well. Fire was a constant danger for the village in 1919.The boiling over of a quantity of oil that was being used on fishing corks caused the total demolition by fire of the H.A. Short and Company fish house. Fishing “corks” were used as floats on the gill fish nets which were in use at the time. The blaze spread rapidly. A large quantity of nets and other fishing tackle stored in the building were burned, the total loss being estimated at $5,000 to $6,000, partially covered by insurance.

In 1919 fishing would have been a major industry in the village. The government patrol boat The Vigilant made her first visit to the village in May, with a crew which was made up mostly of returned soldiers. The Vigilant was 145 feet long and had a speed of 21 knots. She had been put into service in 1914, and, carried four guns to dissuade American poachers.

Although summer crowds may not have been as great as they are today, Londoners who were visiting their cottages on Orchard Beach for the first time were surprised to see “the great damage done along this beach by the washing away of their property.” The Port Stanley year-round residents were very sorry for this loss, since, we are told by the Times Journal, that “in time it will eventually become much worse, thus making it impossible for the owners to sell or build on lakefront lots.” The government planned to put in piles which it was hoped would alleviate the problem. 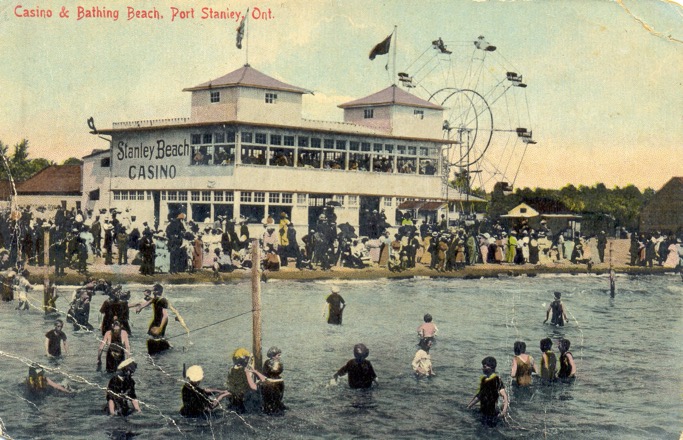 As summer progressed the casino dance hall on the main beach was in full swing. The building, originally built in 1910, had been thoroughly cleaned and the commodious dancing auditorium repainted and redecorated. The large electric lights were covered with pretty shades of a most pleasing colour scheme which were admired on the opening night by all the dancers.

The orchestra, in 1919, was under the leadership of John Watson, and featured cathedral chimes, whose melodious tones, we are told, added a special enhancement to the waltz music being played.

A kinder and gentler time for our little village? Perhaps, but let’s keep this vision in mind as we move forward into the year 2020 and consider preserving some of the aspects which make our village unique. One writer’s opinion. Happy New Year to all my readers.