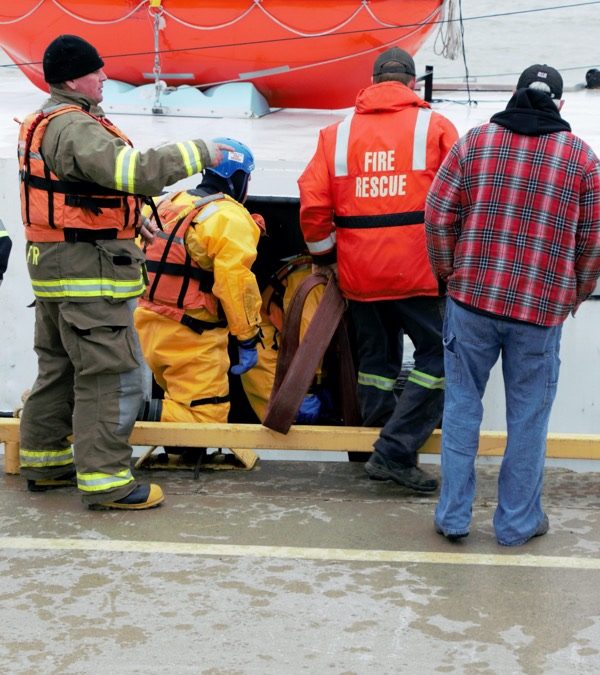 (April 2020) – The crew of the Liddle Lady V was jovial and joshing around on the day after their dramatic Lake Erie rescue. They were on the hard, safe and sound, preparing their fishing tug for repairs after it nearly sank 12 miles from shore. But it was no laughing matter when the Captain’s wife got “the call.”

“I was terrified,” Sarah Burwell-Cook said in an online interview via Messenger. “Worst call I ever received. Hearing my husband say, ‘we’re going down.’ Oh, I was there. I was there the moment I heard the news.” The boat’s crew comprised Sarah’s husband, Captain Shawn Cook, her son Andrew Sheeller, as well as Matthew Bolt, Charlie Liberty and Garrett LaFrance.

Burwell-Cook rushed to the west pier in Port Stanley Harbour on March 11, 2020 as sirens wailed and emergency vehicles converged around her. Luckily, Derek Weaver and the crew of Cosley Bros had been nearby, responded to distress calls and tied on to the Liddle Lady V.

“Shawn called me when he was approximately 20 miles out; said, ‘make some calls, we’re taking on water’,” said Burwell-Cook. “He called again approximately 12 miles out, said ‘we’re going down, the engine room is half full of water’.

“The owners of the boat said abandon ship, don’t worry about the boat, get everyone to safety, (but) Shawn told me he was going to run her in as far as he could, until the engine quit.

“At that point, the Cosley Bros, who was running beside them, hooked on and towed them,” she added. “Coast Guard wanted them to cut them loose so both boats didn’t go down, but they carried on and the Captain, crew, boat and catch of the day made it safely. I am so proud of my husband for bringing the crew, boat and catch, as well as himself, in safely and everyone remaining calm. I am so very thankful for everyone who assisted in the rescue.” 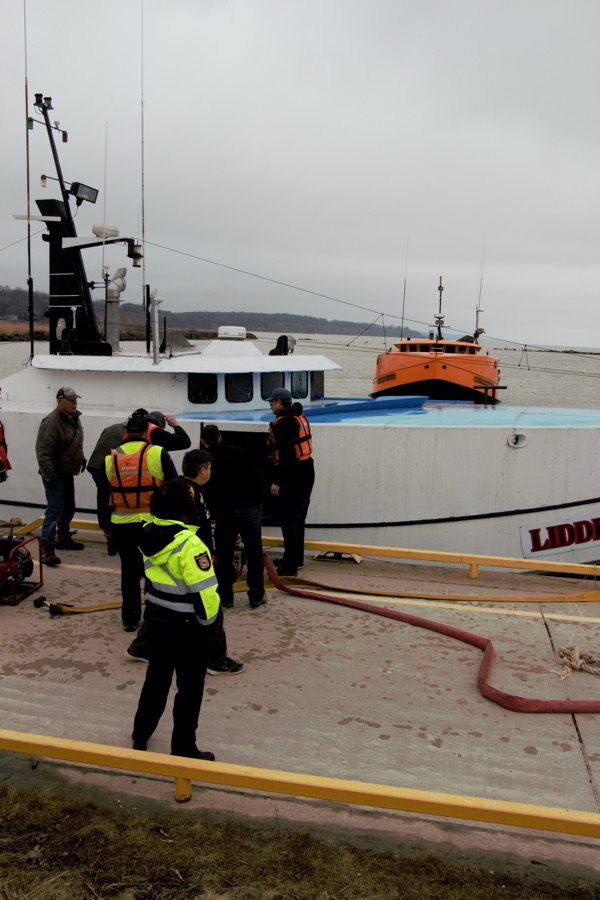 Elgin County Fire Chief Chris McDonough rallied the forces on shore, quickly pumped all the water out of the boat, and helped Yarmouth Crane Service haul her out on the east pier. No one was seriously injured, although one crew member was sent to hospital for observations, with symptoms of hypothermia and shock.

“It looks like metal fatigue around the rudder,” said McDonough. “The hull had been cracked,” but no contaminants were released into the lake.

“The captain said to me it was the only time he didn’t think he’d make it,” added McDonough. “They’re all in the same business. They’re a tight group. They help each other out. Good thing Weaver was out there.”