Blame it on the Everet

By Craig Cole
Concerns about traffic congestion in Port Stanley give me the perfect excuse to recount one of my favorite stories which involves the arrival of the first automobile in our little village.

The date was June 22, 1911. The village was in the grip of patriotic fervor. His Royal Highness King George V was about to be crowned King, and every store in the village was closed to mark the event. To add to the excitement there was even a rumor circulating that the village might be acquiring its first automobiles. Several people had heard about and seen photographs of the Ford Model T which had been produced by the Ford Motor Company three years before, but the three cars which were supposed to be arriving in Port Stanley were Everets, manufactured in Oshawa. They had been purchased by three Port Stanley residents, Nate Cornell, William Jackson and Alex Taylor, and they were due to arrive in Port Stanley on a flatbed rail car attached to the L&PS.

A crowd gathered at the station. All of a sudden, there they were. Port Stanley’s first three automobiles. They were described as being very ornate with lots of brass fittings and a top which could be raised or lowered.

Wait, the cars had been shipped with empty fuel tanks. There was a supply of gasoline in the hardware store, but the hardware store, like every other store in the village, was closed. Eventually Mr. Jason Gough, who worked at the hardware store, was found. He was persuaded to fill the tank of the first Everet and the crowd applauded as the engine was cranked to life. Everyone rushed to the hill leading up to the top of the bluff, and yes, the Everet made it. A cheque was written for $1,300. 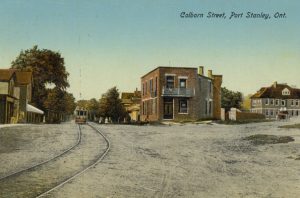 The accompanying photograph gives us an idea of what the main intersection in Port Stanley would have looked like before the first automobiles arrived. The photo can be dated from the fact that the “new” school located beside the Joseph Street hill (known to all Port Stanley old timers as schoolhouse hill), was built in 1908. In 1916 a horse drinking trough, which still stands today, but is not present in this photograph, was erected at the intersection. Note the broad streets, the horse drawn buggy starting up schoolhouse hill and the streetcar from the Southwest Traction company.

Aha! Maybe that is the answer to our traffic problems. Would any of our Mayoral candidates support a 30-storey parking garage on the berm, with a streetcar line linking it to the main beach and other housing developments?