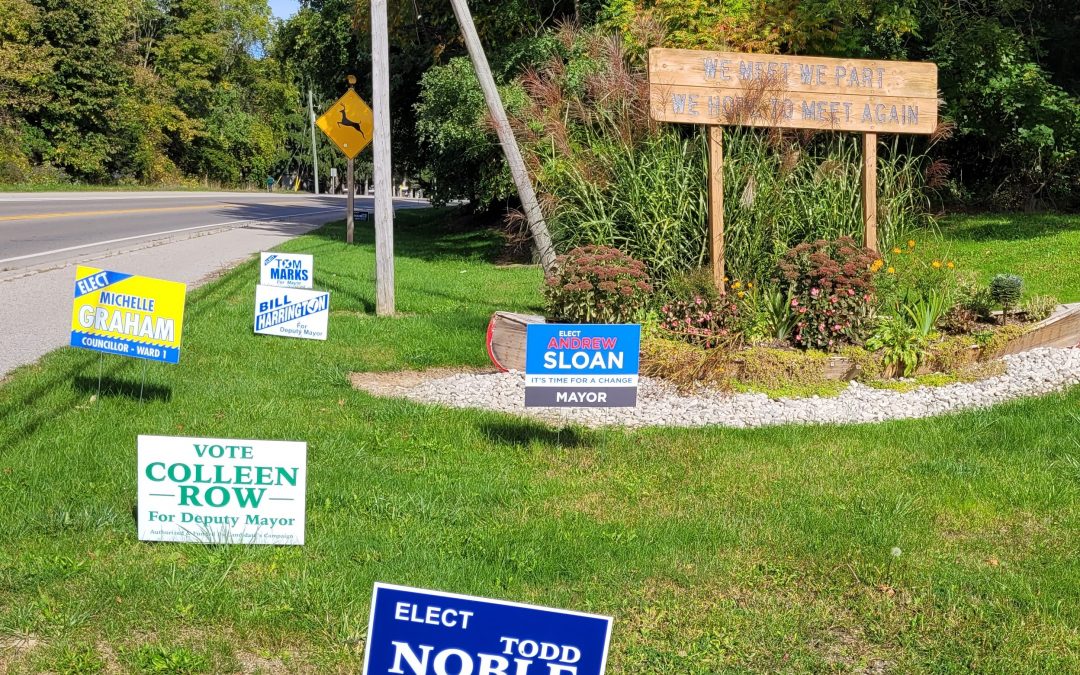 Central Elgin mayoral candidates in the October 24, 2022 municipal election are finding that what’s good for the goose in the north wards is not necessarily good for the gander in the south.

“I am finding that the great north-south divide starts just north of the (new) Port Stanley fire hall,” said Mayoral candidate Dennis Crevits, who was the incumbent Ward 2 Councillor. “I have been getting a response in Wards 2 through 5 (in the north) that they feel Port Stanley, while beautiful, gets all the attention.

“Another view is there is still some resentment from the former Yarmouth Township days to amalgamation … ”, added Crevits. Central Elgin was formed in 1998 through the amalgamation of the Township of Yarmouth with the Villages of Belmont and Port Stanley.

“I have had a handful of constituents complain about paid parking in the north,” he said, “and most people from Ward 1 (in the south) resent it.

“I am not adjusting my campaign strategies in regards to the north-south views,” added Crevits. “I enjoy discussing the equal accomplishments in all the communities.”

Deputy Mayor Tom Marks, another mayoral candidate, has also noticed that voters in Lynhurst and Belmont differ from those in Port Stanley.

“I think some have the view that Port Stanley is the favorite child,” said Marks. “That’s the perception.

“I think of it as a family disagreement,” he added. “All families have disagreements, but at the end of the day, they work it out.

“I’ve seen the figures … all the municipalities in Central Elgin are treated equally,” said Marks. “Over a five-year period, it always evens out.”

“I honestly haven’t found a divide in the issues that are important from north or south,” said Sloan. “There are some unique ones, like Belmont residents who worry about crime, or Port Stanley residents who are frustrated with the new parking rules.

“We have a lot in common in both areas, rural and urban, in both the north and the south,” he added. “Agriculture is important in both areas. People are worried about affordability in both places and looking for the next council to make this a priority. People are looking for candidates that are open to change and new ways of thinking.”

“I feel the people of the north … are wonderful, hardworking people and all they really would like to see is complete transparency,” said Siebenmorgen. “There has been no real explanation for the high water rates and increasing property taxes.

“The south has a hard time understanding how we are connected to an area so far away …”, he added. “I personally feel we need to do more to make all of Central Elgin’s residents feel like they are part of a large community that has great potential of becoming a role model community where other communities can use us as an example.

“But this will be on everyone willing to work together, even our municipality and staff, and I only feel this can happen with a completely new council’s will to work together for all the people.”