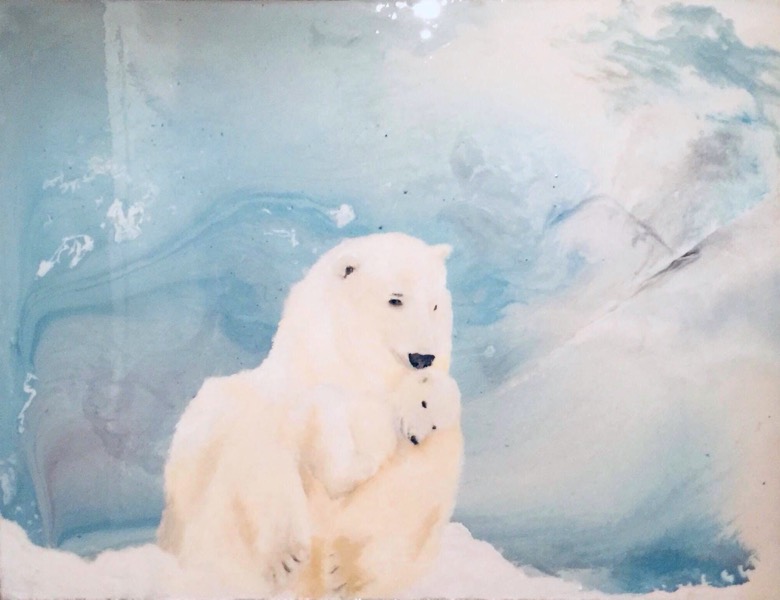 “I’m not an activist by any means, but I am about the future,” added Vickerman. “All I want to get out of Project Nanuk is a little awareness. Global warming is real. This is about small communities. It’s up to us. It has to start here.”

Delayed by the Covid-19 pandemic, Toonies-4-Tomorrow will launch soon in Elgin County. The coin boxes will be available at five locations. In St. Thomas, Staples, Home Hardware and Legends Tavern are participating. In Port, Modern Maple and Village Square Coffee House will take part. Other coin box locations are expected to come on stream as the campaign gains momentum. Ultimately, Toonies-4-Tomorrow hopes to expand in another 40 communities.

“Jamie contacted me about creating artwork for the project, which was ironic because my practice as an artist has been informed by bringing awareness to endangered species,” said Williamson. “Many species are becoming endangered because of their habitats being destroyed, similarly, to how the polar bears are being affected by climate change and consequently, melting sea ice.

“I am very grateful to be a part of Project Nanuk and I plan to continue to produce more work that will further support the campaign and raise funds to help save the sea ice,” she added. “Ultimately, it feels great to be creating art for such a great cause and for something I feel so strongly about.”

PBI Chief Scientist Steven Amstrup, author or coauthor of over 150 peer-reviewed articles on large mammals, reports that 97 per cent of climate scientists have reached a consensus that climate change is real and is fueled by humans.

However research shows it is melting at a rate of 12.8 per cent a decade. Much of the decay has occurred in the last 13 years, according to PBI. Meanwhile, the World Meteorological Organization reports that Antarctica’s ice sheet contains enough water to raise global sea levels by nearly 200 feet. Warm ocean waters are melting the gigantic Thwaites Glacier in West Antarctica. It alone has the potential to raise global sea levels more than 10 feet, according to the WMO. 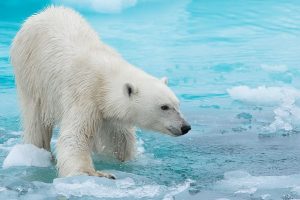 “I’m not a researcher or activist, I just love nature,” Sandford said at the Project Nanuk launch. “My imagery shows beautiful things that are worth fighting for. The next generation will carry things on.”

As a sports photographer for some 21 years, Sandford captured pictures of athletes in the National Hockey League, Major League Baseball, National Football League, the National Basketball Association and the Olympics. In recent years, his early affinity for nature photography attracted him to Lake Erie where he photographed the wave action generated by “the gales of November.” His keen eye and camera equipment have travelled the world, catching dramatic scenes including the breaking surf on the southeast coast of Australia, great white sharks in the Southern Ocean, Canada’s north and Greenland. His study of polar bears produced some striking images. All are on display at www.davesandfordphotos.com

“A project like this shows how you can make a change and have an impact,” said Sanford. “I encourage all of you to keep this project alive and to tell others. Every little bit matters. Everything is not all about doom and gloom. I’ve always been a glass-half-full person … encouraging them through positive imagery. If it gets kids thinking about this … through beautiful imagery and projects like this … they grow up and want to take all these positive steps forward.”