Do you believe in Fairies II?

(September 2018) – One hundred years ago, especially during summer months, cross lake passenger ferries were part of the day to day life of our little village.

The Joe Milton, built in 1891, was launched at Port Stanley in 1891 and could seat 450 passengers on her trips to Cleveland. Agnes Hepburn, in her “Historical Sketch of the Village of Port Stanley,” talks about the launching of the Joe Milton. “Rigs streamed into the village and the village turned out en masse. The train brought 125 more spectators. On an order from Capt. Ellison, the four ropes were cut by the four ship carpenters. As the vessel slipped off, Miss Kate Ellison performed the baptismal ceremony by breaking a bottle of wine on the bow.”

The era of the passenger ferry in Port Stanley gathered steam in 1898 when the Lake Erie and Detroit River Railroad built an 800 foot long ferry slip dock as part of the Port Stanley harbour facilities. The company had leased the railroad tracks between London and Port Stanley from the London and Port Stanley railway. The new slip dock was designed to service their passenger and railcar ferry the Shenango Number 1. A brochure published by the company tells us “The steamer is in daily service the entire year, weather permitting, and is equipped with all modern improvements, electric lighting, etc., serving meals and furnishing berths to passengers.” The ship was licensed to carry 1,200 passengers and 26 freight cars and was billed as being the most direct route between Western Ontario and the American cities of Youngstown, Pittsburg, McKeesport, Oil City, Erie and Conneaut. She sailed from Conneaut, Ohio, to both Port Stanley and Port Dover, alternating destinations. The same company also operated the paddle wheel steamer the Urania, later renamed the Flora. 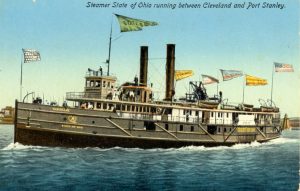 These were two of many passenger ferries which operated out of Port Stanley in the late 1800s and the first half of the last century. The Forest City in 1910 made four trips across the lake each week and had 50 staterooms. Other ferries were the State of Ohio, the Lakeside, the Teddy Roosevelt, the City of Erie, the Joe Milton and the City of Buffalo. 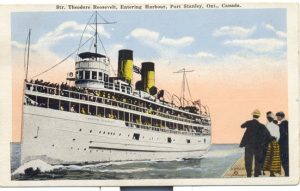 The fare on the Forest City, a steel side wheeler was $2.75 for a return trip in 1910. Of course, in those days a dollar a day was pretty good pay, so $2.75 would have been a considerable expenditure. The one way fare was even steeper at $2.25, but during the summer, the ship did occasionally offer short lake excursions for 25 cents.

Many present day residents of Port Stanley, like myself, would love to see a cross-lake passenger ferry service re-established. Is it going to happen? Not likely. The cost of the necessary infrastructure would be huge. A new ferry terminal would need to be built and the number of levels of government which would have to be involved to arrange constant dredging of the harbour, disposal of the dredgate, and the establishment of customs facilities boggles the mind.
But you never know. Tinker Bell must be getting a bit long in the tooth. Perhaps she will decide to retire to Port Stanley.