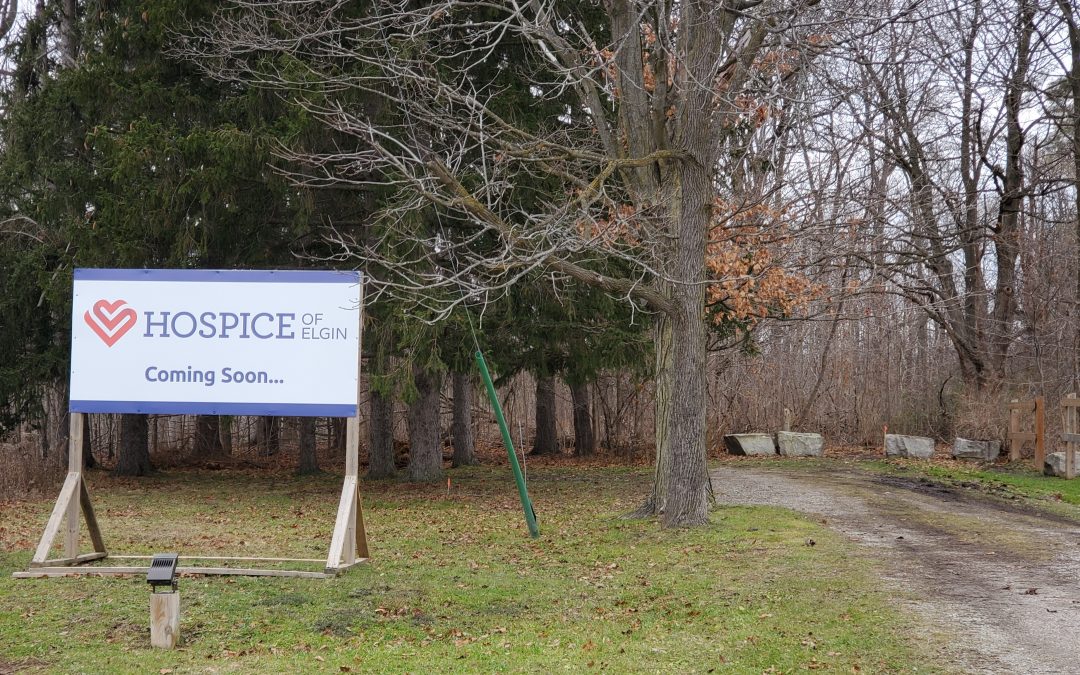 St. Thomas developer Doug Tarry Homes has donated $500,000 toward building Elgin County’s first hospice. The contribution was acknowledged by Hospice of Elgin in a ceremony on October 22, 2022 at St. Thomas-Elgin Memorial Centre.

“It’s understood in the community that there are certain people that are natural leaders,” said Bill Graham, a community volunteer on the hospice’s board of directors. “Doug Tarry Homes has been a visionary leader in the community for many years.”

Hospice fundraisers say they are on track to raise $11 million to build a 16,000-square-foot campus of palliative care, anchoring services to be provided on site, in the community, and in private homes. The Ontario Ministry of Health is committed to funding 50% of operating costs.

“I came to St. Thomas close to 40 years ago and got an opportunity to work directly with Doug Tarry Sr.,” said Mr. Graham. “We’ve all heard stories of contributions he made, but he really was a giant figure in our community, not only as mayor, but on the boards that we were on.

“It’s hard to believe it’s coming up on 29 years since his passing and as he passes the torch to his family, I know that he would be incredibly proud of the impact that the family has had on the community,” added Mr. Graham. Doug Tarry Jr. and his sister Carolyne Tarry also attended the event. “Doug Tarry Homes has done so much for this community and the other members of his family have been contributors in so many ways. I know he and his wife Frances would be so proud of this generation.”

Construction of the hospice is forecast to begin in the spring of 2023. A two-acre parcel of land near Waterworks Park, on South Edgeware Road, in St. Thomas, has been gifted to Hospice of Elgin.

It’s estimated the facility will serve more than 500 people in Elgin each year, while also creating more than 30 new jobs and 200 volunteer opportunities. St. Joseph’s Hospice of London is the over-seer organization.

“The money is fantastic, but the leadership and the message that it gives to our community when we receive this … is making such a difference,” Mr. Graham said at the cheque presentation ceremony. “It’s going to bring the momentum even greater than what it was before.

“Unlike some charities, this one takes time for people to know about all the palliative care, the counselling, the children’s programs,” added Mr. Graham, a retired partner at Graham, Scott, Enns Chartered Professional Accountants, of Aylmer and St. Thomas. “If we haven’t had too much experience with hospice, we tend to think of it as a place where people are going towards the end of their life for wonderful care, but … there’s so much more than just the beds.

“It’s going to affect hundreds of people, more than just the people that are unfortunately in ill health,” he said. “It’s going to have a tremendous impact.”

In Elgin County, there are about 800 deaths annually, impacting about 4,000 family members and friends each year. Hospice care is estimated to be about one-third the cost of hospital acute care and, without a hospice, families supporting loved ones at home may need to shoulder the financial burden of private care.

Yet Elgin is the only region in Southwestern Ontario without a hospice, and palliative care facilities in neighbouring communities have ever-growing waiting lists. Geography creates transportation barriers for seniors in rural settings.

“We can’t think of a better project in our community that will touch every family at some point in their lives,” Carolyne Tarry said at the ceremony. “We at Doug Tarry Homes are all in. This is one of the most important projects in our community. We are in and we hope others will join.”

Doug Tarry Sr. launched Doug Tarry Limited in 1954. He was an active member of the community and participated in many fundraising and charity projects, also serving two terms (five years) as mayor of St. Thomas.

“One of the many highlights of dad’s time in office was being mayor during the Centennial celebrations (Jumbo Days) for the city,” Carolyne Tarry, Director of Operations, at Graphenstone Canada, added in an interview. She also serves on the hospice building committee.

“Historically, it has always been that we give back, but how much would depend on the year we were having,” she said. “This represents one of the largest single donations in the company’s history.

“This donation is in keeping with both what our father taught us and by extension what has become a guiding principle of our company: ‘always leave your campsite better than you found it’.”

Canada was 22nd in a 2021 ranking of the quality of death and dying in 81 countries, according to a report in the April 01, 2022 edition of the Journal of Pain and Symptom Management (JPSM). Canada had slipped from ninth to 11th out of 80 countries in the 2015 Quality of Death Index published in The Economist magazine.

While 75% of Canadians would prefer to die at home, only about 15% have access to palliative home care services and 60% die in hospitals, according to the Framework.