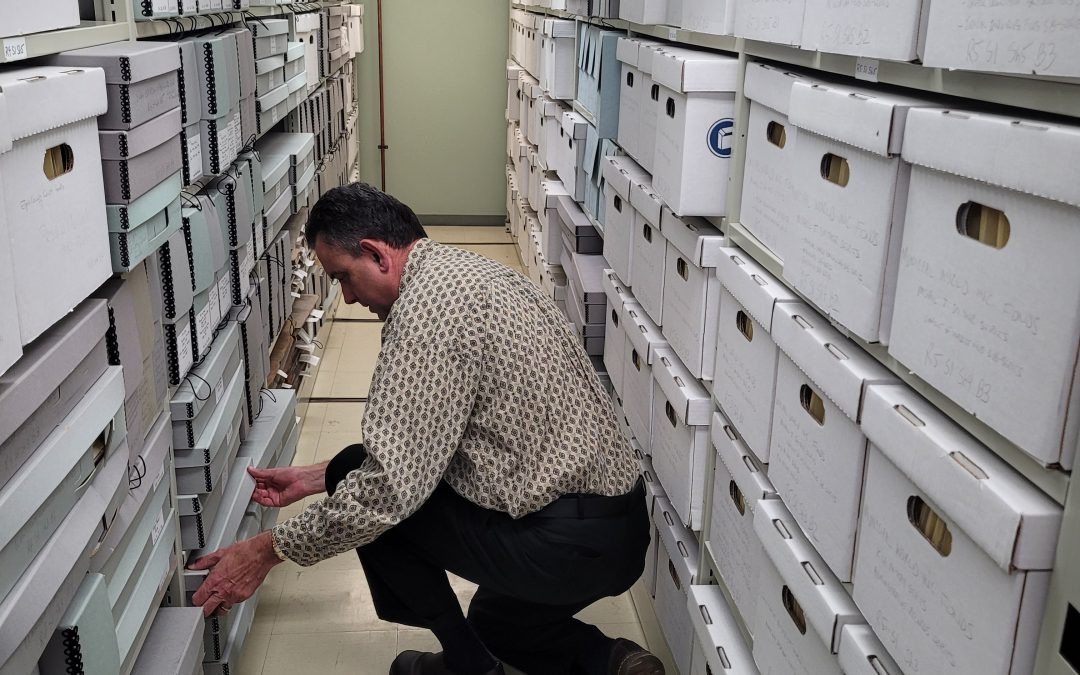 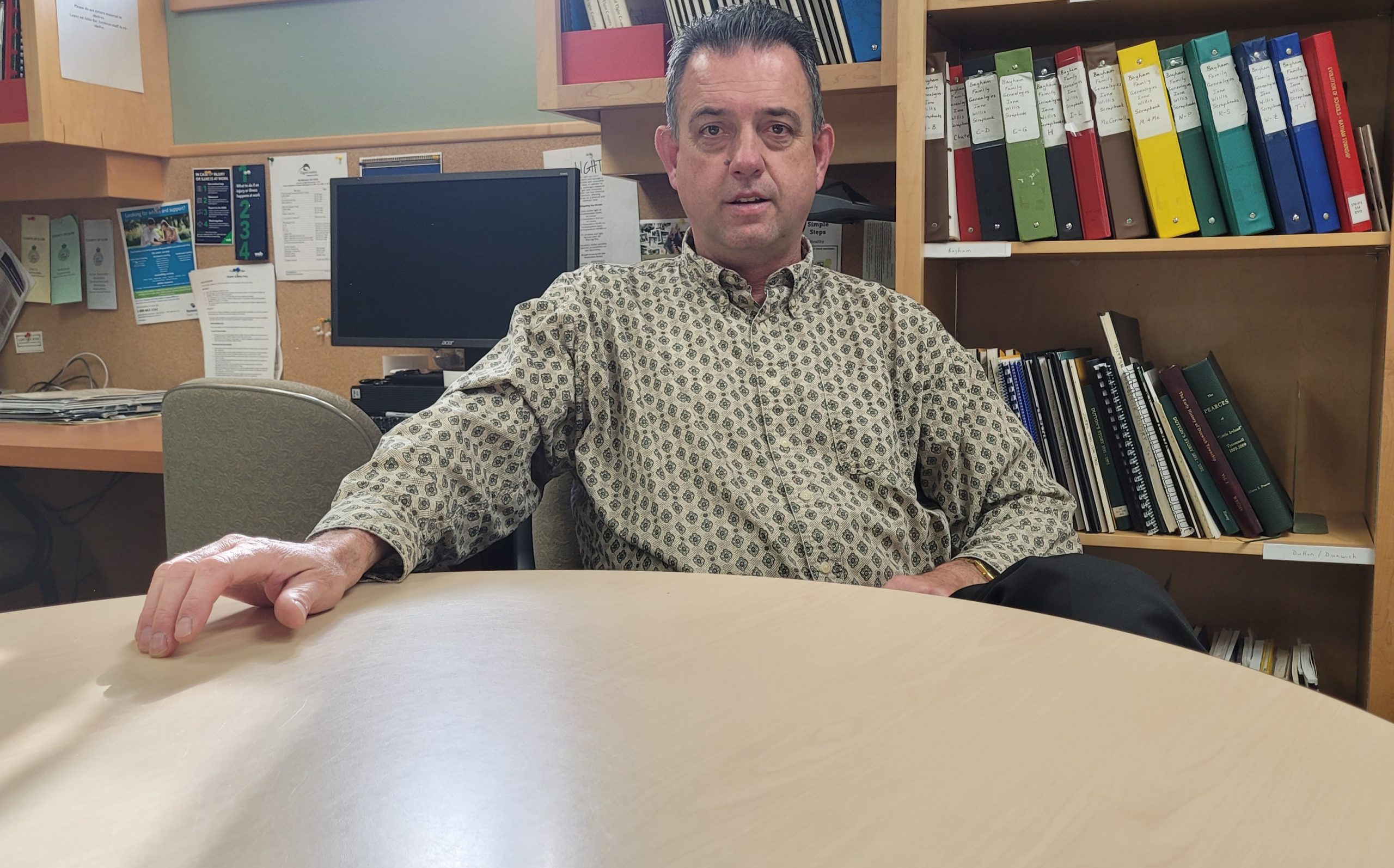 Brian Masschaele’s personal pursuit of his family roots has inspired a passion for collecting, preserving, and sharing historical records that has led him to a celebration of the Elgin County Archives’ 20th anniversary in 2022.

“My own family story has always kept me pretty interested in preserving (history),” Masschaele, 55, said in a recent interview. His mother’s and father’s families immigrated here in the 1940s from West Flanders, near Bruges, in Belgium.

“My grandparents came here literally with nothing but a few family heirlooms and some unbelievable stories of what they went through, particularly in the Second World War, and I just took a keen interest in it from a young age,” added Masschaele, the County’s founding archivist and Director of Community and Cultural Services.

“I have some pretty precious stuff from my family, from their time in Belgium in the Second World War and their passage to Canada,” he said. His father entrusted Masschaele to be the ‘family archivist’. “It is personal for me. If someone doesn’t do it, it goes away.

“I’ve got in my own personal collection a set of German-army-issued binoculars,” continued Masschaele, who grew up in Norfolk County. “It was given to my grandmother when the Germans pulled out in 1944, after they billeted soldiers for four years straight in their house.

“My grandmother remembered going into a bomb shelter in the First World War. We interviewed her and I’ve digitized it. I interviewed my dad and my mom, and I have all these things too.”

It was no surprise when Masschaele went on to earn a Master of Arts (M.A.) in Archival Studies, at the University of Manitoba. He also has a Bachelor of Arts, Honors, History, from Western University.

In the formative years of his career, Masschaele served as: an archivist at the Canadian Imperial Bank of Commerce, in Toronto; a policy and records officer for the Region of Haldimand-Norfolk, in Townsend; an assistant archivist, with the Simcoe County Archives, in Minesing; and an archival assistant, at Western. Eventually, he became the Ontario Archives Advisor for the Archives Association of Ontario.

Masschaele was cutting his teeth in the industry as formal attempts to establish an Elgin County Archives began to stir here in the late 1980s, as citizens raised concerns about preservation and access to their archival heritage. By 1987, a group called Heritage Elgin–St. Thomas convinced County Council to conduct a feasibility study and in 1988 the resulting report outlined some options.

Western University had served as the “de facto regional archives for southwestern Ontario” in those days, playing a “significant” role in record keeping here until it transferred its material to the County Archives. The Elgin County Library system also accumulated archival records from both public and private sources.

Council budget constraints in the early and mid-1990s emerged as a roadblock, however, and the logjam was dislodged until 1998, when municipal amalgamations reduced the number of local municipalities in Elgin to seven from 16. Council quickly recognized the urgency to collect, protect and share historical records. Around the same time, more impetus was provided when the Elgin St. Thomas Archives Association was formed, with members representing the local heritage community, as well as local businesses and professional and legal organizations. 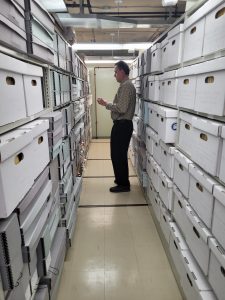 By 2001, Masschaele was hired and the County’s first archivist advanced a mandate of acquisition, preservation and public access that was approved by Council later that year. Duncan McPhail was Elgin County warden at the time.

“I was advising post-amalgamation on how to deal with these issues in communities across Ontario,” said Masschaele. “I happened to be involved in an initiative here, advising them on the way to go forward. Certainly, I never dreamed when I first got involved, that I would end up being the archivist here.”

As a footnote to Council’s approval of the County Archives, the pivotal vote occurred on September 11, 2001, the day a coordinated suicide terrorist attacks killed nearly 3,000 Americans.

“One of our staff came to me when I was in the lobby waiting to go into council to pitch this proposal and said ‘do you know what’s happening in the world right now?’,” said Masschaele. “Duncan McPhail said ‘I think we need to take a break in this council meeting’, rolled the television in, flipped it on, and watched the second tower go down.

“We take this break, (McPhail) looks at what’s going on, and he says, ‘you know what, we’ve got work to do. We’ve got to get back at it. We’ve got to show that we can get back to business’. I was so impressed. We reconvened and I was the first report after that. What do you say after all this? Except to say you’re living in a moment in history.

“Yes, it was approved,” he added. “Even though the world looked like it was crumbling, (Council) made an investment in the future of our history. I remember thinking that maybe this was meant to be.”

The County Archives was assigned space on the fourth floor and in the basement of the Elgin County Administration Building. It was upgraded with climate-controlled storage, a public reference space and staff work areas in 2002. The grand opening ceremony took place on November 8, 2002.

“I was very busy with the amalgamation issue because it was quite a serious challenge to ensure that municipalities were aware that … there were legal obligations to maintain this material and the best way to do it is to make sure you have a co-ordinated plan,” said Masschaele.

“At a bare minimum, there might be stipulations within the Municipal Act, things like minutes and bylaws have to be maintained and have to be made available for public inspection,” he added. “That doesn’t stop. There isn’t a limitation on that. It applies from the day of the incorporation of the municipality. So when a new municipality comes into being, it has those obligations on behalf of the former municipalities.

“So when you start to put all these pieces of legislation together, there’s an obligation to do something,” added Masschaele. “You can meet the obligations in many different ways. You can do the bare minimum and that is ‘yeah, we kept it, but we kept it in a public works garage, and if you need to see it, we can make it available to you’, or there is what the County of Elgin … continues to do. They say ‘no, we can do better than that, because we’re proud of this stuff, and … we know it has real value for our on-going needs’.” 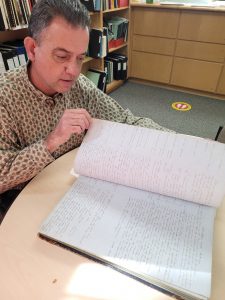 The collections of course include Council minutes, bylaws, tax assessment rolls, maps, voters lists and other records of the county government and its 16 former and current local governments dating back to 1852. The archives has a complete set of records from the Elgin County Clerk’s Office since its inception, including petitions on matters such as temperance, social welfare, justice and the need for infrastructure.

There are items like: Elisha Ganson’s oath of office as the first provisional Elgin County Warden in 1852; Benjamin Drake’s promise in 1852 to give a deed to the Crown for the Elgin County Courthouse lands; William Coyne’s oath of office as provisional county treasurer in 1852; and an agreement with architect John Turner to manage construction of the courthouse and jail in 1852. On a cold winter night, the public may even choose to view all Elgin County Council minutes and by-laws from 1852 to the present, as well as agenda packages from 1998.

The Scott Studio fonds is a collection of national significance: about 100,000 negatives created by three generations of photographers, recording all aspects of life in Elgin and St. Thomas from the 1870s to the 1980s.

The archives maintains records of Alma College, the internationally-renowned educational institution for girls and young women that operated in St. Thomas from 1877 to 1994.

There are also records of several Elgin County Women’s Institutes, including the “Tweedsmuir Histories” for communities throughout the county, providing a female perspective of life in rural Ontario throughout the 20th century.

A large volume of records is maintained, documenting the history of the Anderson Department Store in St. Thomas, 1896-1988, and the Anderson family’s extensive contributions to the community.

The collections are vast and also include: the Tremaine’s Map of the County of Elgin, 1864; province-wide census returns; Upper Canada land petitions; probate and surrogate court records; directories and local newspapers, including the Rodney Mercury, West Lorne Sun, Dutton Advance and Aylmer Express.

“We also realize you can’t keep everything,” he added. “You have to apply what’s called an appraisal methodology toward determining what’s is really important here … to really truly keep what’s going to reflect what the story is of that organization … with some integrity of evidence of that organization. That’s really what we do. 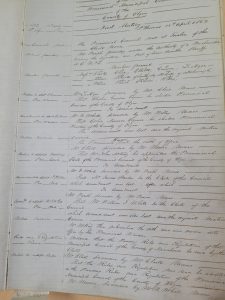 “I often say to people … it does seem like a bit of a soft service … but if you have letters from your great grandfather from the front in the First World War, and your family no longer had an interest in him, but you knew that he lived in Port Stanley, or Aylmer, and these letters had a real potential of being thrown into the trash, wouldn’t you like to know that there’s an option available to make sure this invaluable material is actually preserved and made available,” said Masschaele. “Who could say no to that?”

Masschaele said the general population’s views about history, the significance of some events and personalities, and the way our heritage is collected and consumed are very dynamic and seem to change on a daily basis.

“I’ll tell you, people today have a tonne of digital photographs, (and) they are not thinking about how they’re going to preserve those on an ongoing basis,” he continued. “We have to think about this stuff.

“I think what has changed more than anything is the whole notion of people needing instant results,” added Masschaele. “When I first started as an archivist, it was the routine of someone to sit in our microfilm room, looking for reels of microfilm, or sitting at our reference table, spending an entire day in the hopes they might find one thing relevant to their research. Now the inquiry is ‘I’m doing the history of my family, what do you have?’ and if we don’t provide a Google-type of result, it’s ‘okay thanks.’

“You still have to do some research,” he said. “We have gone a long way in … in digitizing. That has been one huge change. Now we’re adding another layer on everything we do and that is we’re making it available online.

It took 10 years to transfer all the amalgamated municipalities’ records to the archives. The bulk of the transfer occurred in the first five years and transfer agreements ensure an orderly process going forward. “That was not a small amount of material to come in,” he said. “I worked regularly in formal town halls and basement spaces working with them.”

County Archives accession records – tracking acquisitions and their status – shows that the County processes about 200 new collections a year. It currently possesses some 3,000 banker’s boxes of physical heritage materials and about 200,000 online data base records, many with multiple associated records.

“The growth has been steady,” said Masschaele. “Space and resources are limited. We can’t keep grandma’s scrapbooks on the royal family. That’s just not our mandate. We can’t keep everyone’s public family history. Sometimes those are awkward conversations. I know it’s really important to your family. Unfortunately, it’s not collectively.

“We try not to duplicate,” he added. “We’re digitizing 100 years of the St. Thomas Times Journal right now. It’s a massive project. This is painstaking work.”

Though painstaking at times, it is rewarding at others, and it is work they remain dedicated to for yesterday, today and tomorrow.