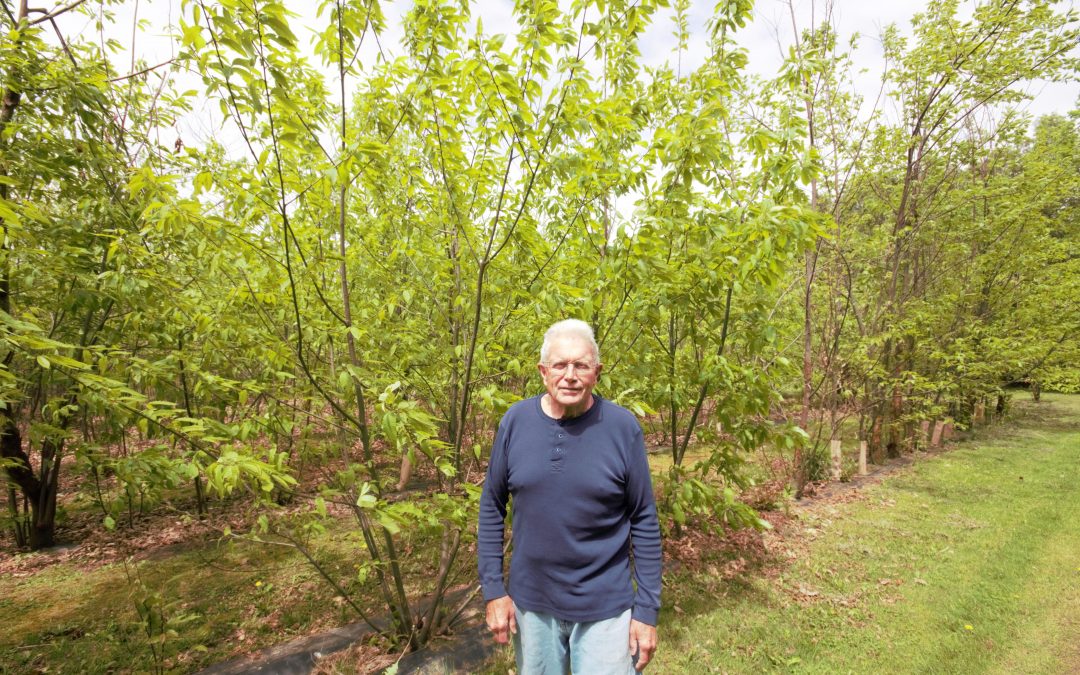 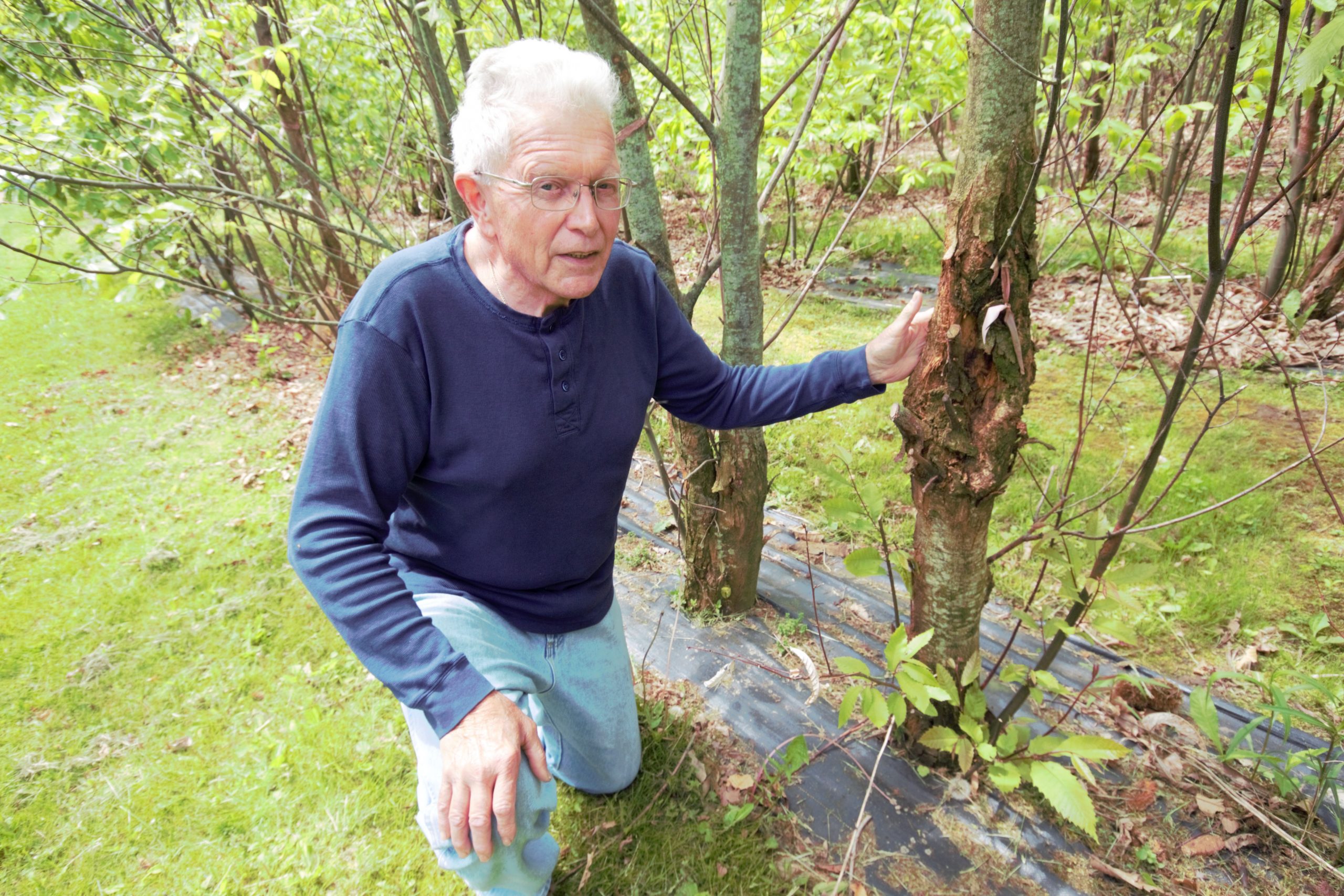 The deep community roots that Ron Casier established over three decades as a science teacher in Elgin County may go a long way toward explaining his current commitment to the restoration of the Carolinian forest.

“People said you shouldn’t live in the community where you teach, but I lived in the community where I taught,” Casier, 69, said during a recent interview at his 50-acre property just east of St. Thomas. He taught biology and chemistry before becoming head of the science department at St. Joseph’s Catholic High School between 1978 and 2008.

“Teaching should be a vocation, not a job,” he said. “I loved teaching. That was my connection. It was a community. I knew the kids. Kids I’ve taught came back as teachers and I worked with them as colleagues.” In fact, a girl he taught, Cathy Cepo, eventually returned as a woman and replaced him as chemistry teacher when he retired. “She’s still there.” 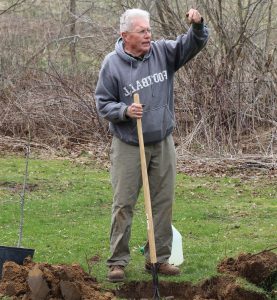 Among his many commitments to supporting the local environment, Ron Casier is a Celebrate Central Elgin volunteer. On April 22, 2022 he led a tree planting event, to acknowledge Earth Day, organized by members of the Central Elgin Environmental Committee at Lawton Park, in Union.

Casier was hired as a biology and chemistry teacher. Inspired by biology teacher Robert Brown at Blenheim District High School, Casier had studied at Althouse College for one year after an academic career in the sciences. In those days, St. Joseph’s was shoe-horned into three buildings around Holy Angels’ Church, at 502 Talbot Street. The school moved to its current location at 100 Bill Martyn Parkway, St Thomas, in 1994. “I moved all the breakable stuff in my pickup truck. It was a bit more freewheeling in those days.”

As department head at St. Joseph’s, he was free to share his passions with the community. Casier introduced environmental science and brought aqua culture to the school, raising rainbow and brown trout and studying their habitat.

Among many other environmental projects around the county, Casier recruited the ELP students to complete three reforestation projects on his farm, where he is restoring a 20-acre woodlot to provide habitat to support Carolinian wildlife and to encourage endangered species. This includes a one-acre research plot for breeding blight-resistant American chestnuts.

“ELP was all based on environmental things,” said Casier, who is still the coordinator for the South West Region Envirothon. “The big thing was the outdoors. 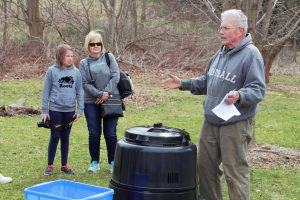 About two dozen area residents attended the Earth Day event, and each received a free Carolinian tree sapling to take home with them. Saplings offered were Freeman and Sugar Maples, Hackberrys, and American Sycamores, all of which are native to Elgin County.

“It was a real community. It wasn’t just teaching. There were functions, coaching, working with the parishes.” Then Casier joined the Elgin Stewardship Council and the Canadian Chestnut Council as directors of both organizations in 2008. He has been chair of the Chestnut Council since 2012. “This grew out of school.

“Science was my thing from way back when I was a kid,” he added. Casier married Pauline Intven-Casier. Their children are Remi, 32, Victoria, 31, and Karel, 27. “I was always just curious, and my parents were always positive towards education. I was always thrilled when the teacher got out the beakers. I was fascinated.”

Teaching science in a Roman Catholic school wasn’t a stretch for Casier. “Everybody used to always say you can’t teach evolution,” he said. “Who said God didn’t direct evolution? Maybe there was a divine spark.

They were burley tobacco farmers, with Elm trees around the perimeter of their homestead. The loss of those trees to Dutch Elm disease is a sad memory that has served to inspire Casier.

“We’ve lost so many things,” said Casier, who’s also an Elgin Middlesex Woodlot Association supporter. “It’s important to bring some back. I’ve always been a tree guy. I have a small nut orchard.

“You just have to walk through Springwater Conservation Area to see it,” added Casier. The endangered list is alarming: Butternut; Blue Ash and Black Ash; and Red Oak. Hickory and Beach are diseased. “These diseases have just decimated it. We need a tree to put back into the landscape.”

Casier estimates there are about 3,500 American chestnuts in Elgin County, mostly at Hawk Cliff, John E. Pearce Provincial Park, and Port Burwell Provincial Park. The Catfish Creek watershed has the largest concentration. “Those are the ones we planted.” There are only about 12 to 15 ‘natural trees’ left here. “They are the survivors.” 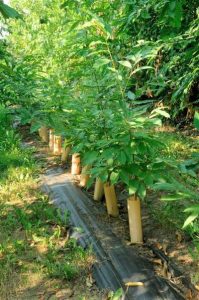 The American chestnut (Castanea dentata) is the only chestnut hardy enough for the Canadian climate, but it is rare, being highly sensitive to chestnut blight (Cryphonectria parasitica). In Ontario, the trees are only found in the Carolinian Zone, between Lake Erie and Lake Huron.

“The timber was valuable, straight grain, strong, easy to work, virtually rot resistant. It was called the cradle to grave tree because your cradle was made of it and so was your coffin.” Many communities harvested American chestnuts not only for their nuts, but also for fences, telephone and hydro poles, as well as railway ties. “It didn’t need any treatment.” There are whole barns – even the shakes – built with American chestnut.

American chestnut was a keystone species in the eastern hardwood forests, and its demise has altered forest ecosystems, reducing species diversity, and changing soil and litter dynamics. Some 275 species were directly dependent on the American chestnut. Eleven species of moths are now extinct. Songbirds declined, goshawk declined, passenger pigeons disappeared.

“There was a ripple effect.” Even Brook trout were affected. “Chestnut leaves are high in protein. When they’d fall in a stream, they would create a leaf pack.” Aquatic larva would accumulate in the leaf pack and provide food for the trout.

Quakers in the 1850s found several hundred acres of American chestnut trees in the region. The chestnut grove had been sustained by First Nations people.

Casier’s one-acre research lot has about 2,000 American chestnuts. “It’s a genetic breaking program to bring natural resistance to the blight.” Basically, what Casier does is inoculate trees with the blight, monitor their growth, and support and reproduce the trees that show resistance.

The blight is a fungus, native to Asia, accidentally introduced to North America in 1876 through a mail order tree business in New Jersey. By 1904 it wiped out the inventory at the New York Botanical Garden. They weren’t re-introduced in New York until 2012, when test trees produced by the New York State American Chestnut Research and Restoration Program were planted.

“We need to do something to preserve our wildlife,” said Casier. He takes great pride in saying that hunting is not allowed on his property. “It’s a sanctuary. We have to preserve our forests and wetlands. You can spend millions to preserve an animal or a bird, but if it doesn’t have any place to live, where are you?

“With climate change, things are evolving,” he noted. “We know the American chestnut can go further north, (but) in 50 years, sugar maples won’t be able to grow here due to climate change.”

The Stewardship Council is comprised of 15 volunteer directors who work collaboratively to provide environmental land stewardship opportunities and advice for landowners in Elgin County. It was established in 1997 and incorporated as not-for-profit in 2007. 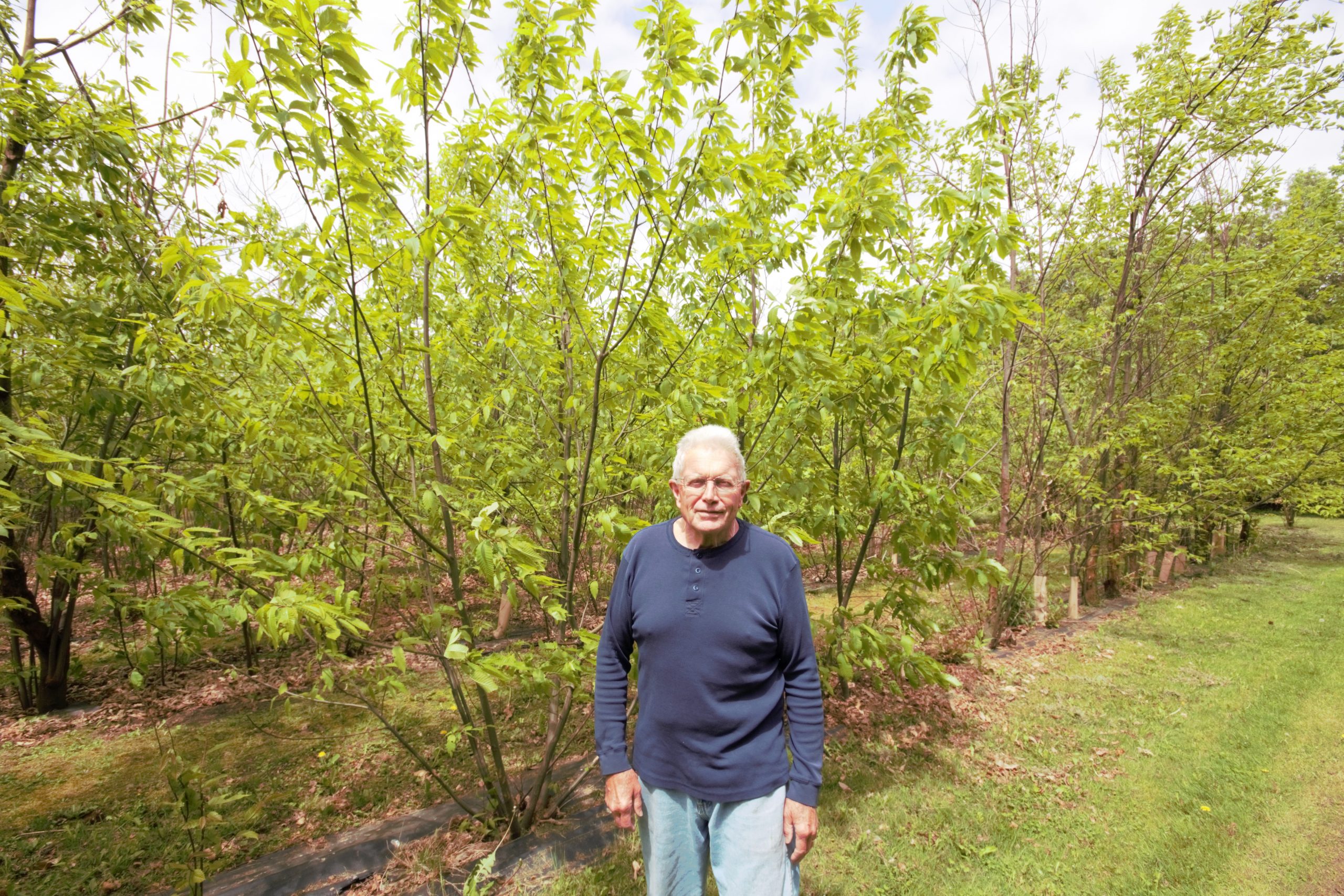