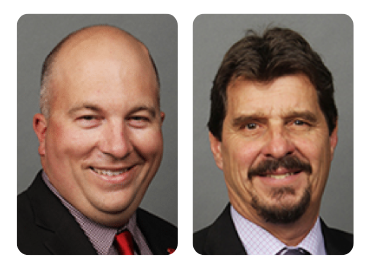 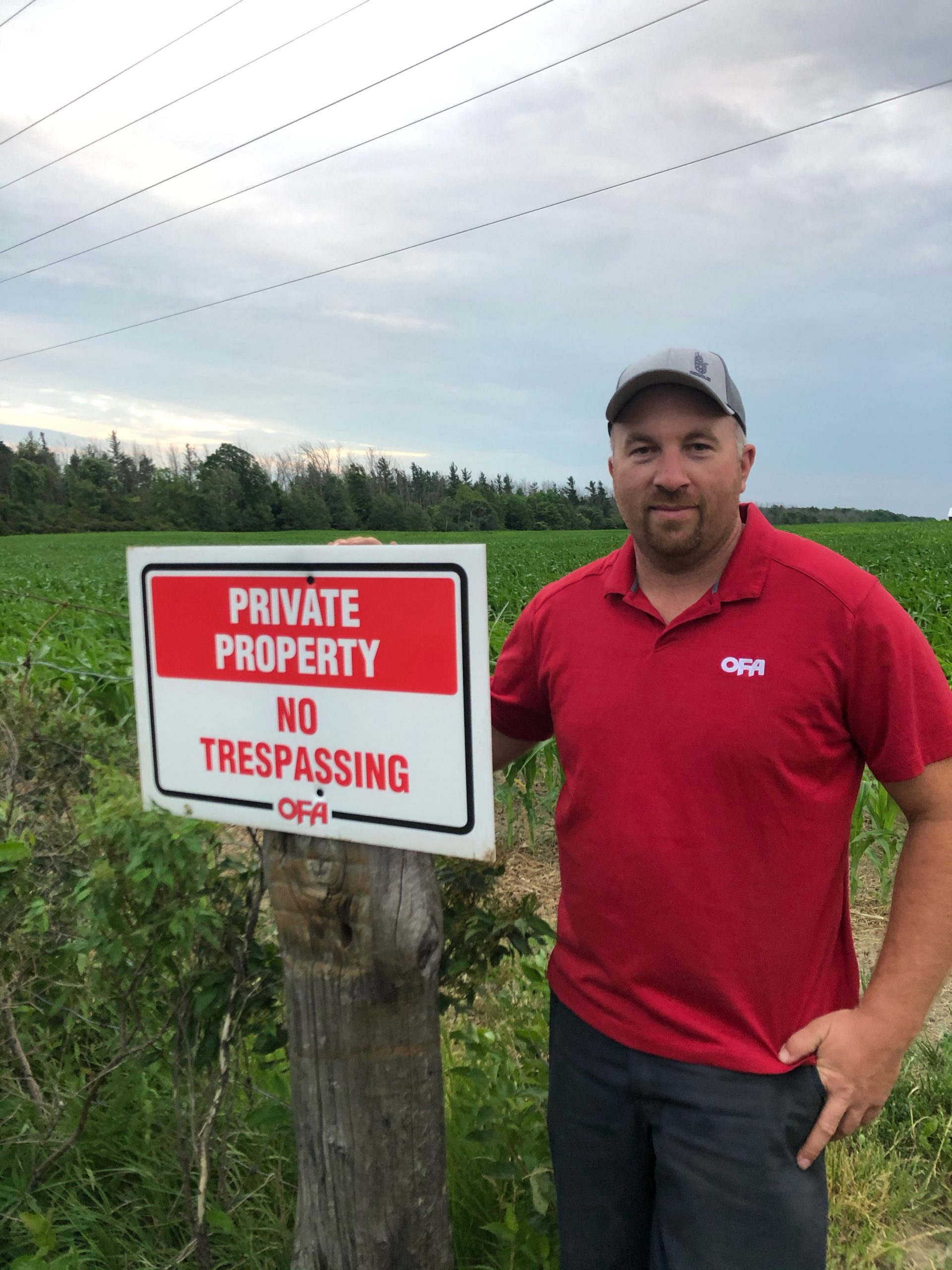 OFA Vice President Drew Spoelstra, stands next to a ‘No Trespassing’ sign posted beside his corn field.

By Drew Spoelstra and Mark Reusser

Ontario boasts a picturesque landscape with a wide range of elements from rolling hills and waterfronts to diverse croplands, endless horizons, and everything in between. Especially in the summer season, it is easier for us to get out and enjoy everything the outdoors has to offer. There are plenty of beautiful scenes to look at and activities to enjoy.

Whether snapping a photograph of a vibrant sunflower or canola field or riding your all-terrain vehicle (ATV) on a trail, its important to be mindful of your surroundings and whose property you are entering. Although farmland appears to be an open and vacant lot, it is private property and entering without permission is considered trespassing. The Ontario Federation of Agriculture (OFA) wants to remind Ontarians that farmers work hard to maintain this landscape and use it to grow and raise healthy crops and livestock to feed the world. It is important to respect this process and avoid disrupting the growth of crops or livestock at a farmer’s expense. Trespassing on private property is an ongoing concern for Ontario farmers and is unfortunately heightened during the summer season.

Several incidents of trespass have taken place across the province recently, including instances involving social media selfies in canola fields in the Dufferin region. On one side, travelers and tourists are capturing the beauty and essence of a canola field in the countryside to share on their Instagram account. But on the flip side, a farmer is under heightened stress with visitors entering private property, causing potential damage to crops, and creating a liability on the farmer should any accident occur while snapping a picture on farm property. In the recent Dufferin situation, an estimated cost of $2,000 was assessed in damages that the farmer will likely have to cover out of their own pocket. It’s a hefty price to pay. In the Niagara region, trespassers went as far as releasing cattle from a barn which not only poses a risk to the public with stray cattle wandering the roads, but also results in biosecurity and animal welfare issues. Additional reports of trespassing appear on social media every day, resulting in the OPP Central Region posting on Twitter that ‘it is not a right to enter a field to get a perfect photograph’.

The impact trespassing has on farmers and their business is far greater than the offenders likely intend. However, that doesn’t make it acceptable. Mentally and financially, trespass can take a large toll. In addition to the existing stressors of uncontrollable elements in farming such as weather, disease outbreaks and equipment breakdowns, there is the unsettling fear that animals or crops might not be safe even with an adequate amount of signage indicating farmland and private property. To put things into perspective, this situation compares to a group of strangers entering a private backyard and taking a closer look at your garden or flowerbed. It’s unsettling and anxious to have strangers in a private area they shouldn’t be. In some cases, the field or barn that is being trespassed is adjacent to the homes of farmers and their families. If an invitation hasn’t been extended to enter private property, there should be no assumption that it’s permissible.

The result of trespassing can also cause financial strain based on the damage to crops, animal health, or fences protecting these crops and livestock. By law, a field is considered private property even in the absence of signage which people tend to disregard when they want to grab a photo. Entering a field or a livestock sanction also increases biosecurity risks, threatening the health of crops and livestock. Encountering a diseased species prior to entering a field of a healthy crop or a barn with healthy livestock, can expose the entire population, threatening their viability, especially at times when disease pressure is high.

Trespass can also turn into a dangerous situation very quickly if you aren’t aware of your surroundings, especially on a farm. After pesticides are sprayed, there is a re-entry period for safety. Strangers entering the field won’t be aware of this re-entry period without communicating with the farmer first. A bull could be among cattle released from a barn which also poses a serious trampling risk.

Fines and penalties for trespass violations can be handed out by law enforcement under the Trespass to Property Act or the Security from Trespass and Protecting Food Safety Act.

As farmers, we are more than happy to share the beauty of our farms and the agriculture sector with everyone, but please be respectful and enjoy the picturesque scenery from a distance. It’s important to remember that what might appear to be a pretty picture can be highly disruptive and lead to consequences for both the farmer and the photographer. Farmers work hard to produce food, fibre and fuel for all Ontarians to enjoy, and it is important to remember to respect that objective.