By Craig Cole
(December 2019) – Last month saw considerable activity at the corner of East Street and Sunset Drive where a new Port Stanley firehall is being built. This will replace the current fire station which was built at the foot of the Joseph Street hill in 1974. The construction of the new station is due to be completed next year.

When I was a boy growing up on Orchard Beach 75 years ago, the wail of the fire siren usually meant only one thing. Another drowning or near drowning had taken place on the main beach, and the fire crew was being called out to do what they could to resuscitate the victim. This probably did not happen anything like as frequently as I remember it, but I think there were far more frequent drownings than there are today.

Seventy-five years before that, in the 1800s, it was fire which was a constant threat in a little village like Port Stanley. The buildings in our village were mostly made of wood, heating came from coal or wood fires, and illumination was from oil lanterns or candles. In 1857 a major fire destroyed much of Port Stanley.

Fire hydrants were not installed in the village until 1912. In the early years of the last century the fire “wagon” was housed in a barn near the Franklin House hotel (the site of the present LCBO store). The loaded fire wagon was drawn to the site of a fire by a team of horses, but often could do little to save a property from destruction.

The St. Thomas Times Journal account of the fire which destroyed the Franklin House hotel is worth repeating. It is dated December 11, 1918: “The Franklin House, one of Port Stanley’s oldest and best-known hotels was destroyed by fire at an early hour this morning. Mystery surrounds the origin of the fire which appeared to have started on the first floor near the centre of the structure and which was blazing merrily when Charles Wong who conducts the Chinese restaurant across the road from the hotel was awakened. He at once turned in an alarm and a tug whistle called out the citizens. It was impossible to do anything toward saving the hotel which was a two-story frame structure and the fire fighters had difficulty in saving the bar which caught fire on more than one occasion.”

The bar was no doubt well soaked in alcohol. It is interesting that in those days the warning that something was amiss in the village came from the blowing of tug whistles. Port Stanley has always had a volunteer fire department. Hepburn, in her book entitled, Historical Sketch of the Village of Port Stanley, records that Fred Pollock was the Port Stanley fire chief in 1914 and the volunteer crew of six men each received a cheque from the Village Council at Christmas time for about $12.00.

A few years later, a new firehall was built adjacent to the Town Hall on Bridge Street. This building, shown in the accompanying photograph, boasted a 60-foot tower which was used for drying the 200 feet of fire hose which was carried on the truck. A fire siren was now mounted on the wall of the adjacent Town Hall could be heard three miles away. It was the sound of this siren which punctuated my boyhood summers and was used to summon the volunteer fire crew instead of having to rely on tug whistles. 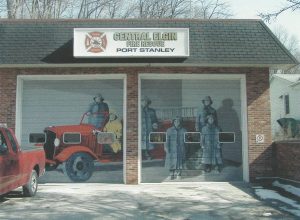 In 1974 the firehall was moved to its present location at the foot of the Joseph Street hill, a location which in the1940s was occupied by a gas station and a blacksmith shop operated by Joe Sharpe. The much-loved mural on the doors of the present firehall is based on a black and white photograph which appeared in the St. Thomas Times Journal in 1939, showing the fire chief at the time, M.J. McIntyre seated at the wheel of the fire truck and crew members George Hough, Herbie and Lloyd Jamieson, Jack McIntyre and Blake Berry.

In 1946 Chief McIntyre suffered a fatal heart attack when returning from a fire in a summer cottage on Erie Rest. The doors of our new firehall will be much larger than the present doors, but it is hoped that the mural depicting the members of the1939 fire department can be preserved with a high resolution photograph which can be used to create a mural board that will stand alone by the tourist booth east of the lift bridge.

Note: In the interest of historical accuracy, let me make a small correction to the article which was published in last month’s Port Stanley Villager about Gideon Bostwick the father of John Bostwick, Port Stanley’s founding father. Gideon was born in New Milford, Connecticut, which is about 50 miles south of Great Barrington, Massachusetts. He moved to Great Barrington at an early age.