Hills of Gold and Silver

By Craig Cole
(January-February 2019) – The history of our little village has been blessed by the presence of a host of colourful characters. One of these was Frank Yerington, who emigrated to Carson City, Nevada in 1863 and made his fortune there mining the Comstock lode. His friend and one time business partner, Sam Shepard, remained behind in Port Stanley and thrived as a grain merchant. Heritage Port Stanley, the Port Stanley historical society, has published a wonderful collection of letters which were exchanged by these two characters over the 30 years from 1863 to 1893. 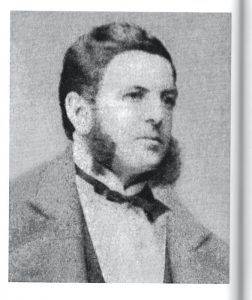 It appears from the early letters that Shepard had apparently loaned Yerington sufficient funds to allow him to move west, and in the early years much of the correspondence which we have involves Yerington’s excuses for not repaying the loan, and suggesting to Sam that maybe he should not follow up on his earlier plans to follow Yerington to Nevada. In one of his early letters to Sam, Yerington says, “You speak of bringing your family out. It costs a pile to live and move around. Servants’ wages are very high. Nearly all the provisions used in the territories are brought over the mountains at a rate of four cents per pound.” He also has reservations about life in America. “The morals of the people are not big and beyond reproach by any means. Sunday is the same as any other day with little exception and the gambling and drinking saloons are driven night and day seven days a week.”

Shepard, writing back to Yerington from Port Stanley on November 1, 1863, reports on his market activity as follows. “We have done a large business here. We did not commence near as early as last year, and have already shipped over 200,000 bushels of grain and shall probably ship 50 to 75,000 more before the close of navigation. We have only sent two cargoes of peas to Montreal. The balance has gone to Oswego and Buffalo and a little barley to Cleveland.” 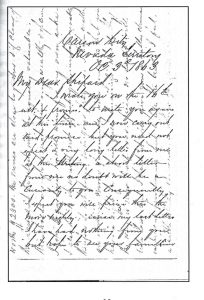 Yerington did not lose touch with matters at home. In January of 1865 he writes, with reference to rumoured events in Canada, “The Confederation scheme is in my opinion a magnificent conception and I hope to see it successfully carried through.” On more personal matters, Yerington held strong opinions. In 1863, Sam Price was a Port Stanley resident who was running as a Member of Parliament for Canada West. Yerington writes in his letter to Sam, “Mr. Price is one of the last men for a Member of Parliament. A man of unbridled passions who would use the power his position gives him to crush the poor and helpless is certainly not a fit and proper person to represent the people and, if elected, he would be death to all creeping insects”. Goodness!! It makes our last elections seem pretty tame.

Yerington had many interests in Carson City, acting as superintendent of one of the largest ore mills in the territory (i.e. the Nevada Territory), and as superintendent of the Virginia and Truckee Railway. He bought shares in various Comstock Lode mines for his friends in Port Stanley, including Dr. Miller, a Port Stanley physician , and Joseph Bostwick, the first son of Port Stanley’s founding father, John Bostwick. Another of Bostwick’s sons, Henry Bostwick died tragically in a drowning accident while visiting Nevada. 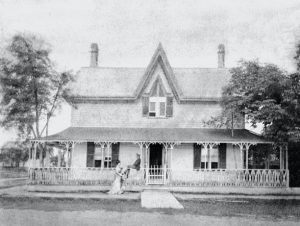 Despite Yerington’s urging that Shepard join him in Nevada, Shepard did not succumb to the lure of the hills of gold and silver. He built an impressive home on Stanley Street in Port Stanley (accompanying photo) which is now a heritage designated property and the site of the Windjammer Inn. As evidence of the importance of Shepard’s activity as a Port Stanley grain merchant, the top hat which used to be presented to the captain of the first ship to arrive in the Port Stanley Harbour each year was known as the Shepard Hat.

For a real taste of what was going on in our village 150 years ago, it would be hard to beat this fascinating collection of letters exchanged between two businessmen. Copies can be obtained from members of Heritage Port Stanley.