Introducing the Elgin-Middlesex-London front runners in the Provincial election 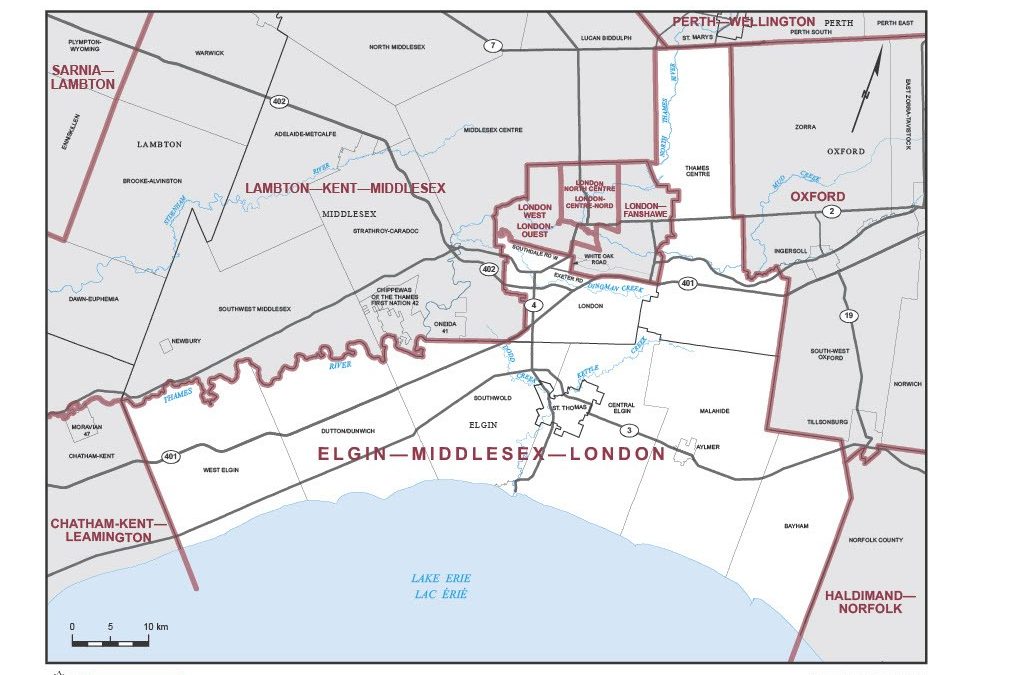 Elgin-Middlesex-London candidates in the June 2, 2022 Ontario election returned to the campaign trail this week, with the early front runners here still riding on the coattails and promises of their provincial leaders.

The riding came up for grabs after Progressive Conservative (PC) Member of Provincial Parliament Jeff Yurek resigned in February. Yurek took over from Liberal MPP Steve Peters in 2011, after Peters had represented Elgin-Middlesex-London for three terms. Yurek was re-elected in 2014 and 2018.

Currently, the CBC News Poll Tracker shows Doug Ford and the PCs are leading with the support of 37.4 per cent of eligible voters across the province. Steven Del Duca’s Liberals are at 28.3 per cent, Andrea Horwath’s New Democratic Party (NDP) at 23.6 per cent, Mike Schreiner’s Green Party at 5.6 per cent, and other parties at five per cent combined.

The Poll Tracker shows PCs at 38.9 per cent in southwest Ontario, the NDP 23.6 per cent, the Liberals 22.2 per cent, the Green 7.6 per cent and other parties 7.7 per cent. In Elgin-Middlesex-London, the candidates are Rob Flack for the PCs, Andy Kroeker for the NDP, Heather Jackson for the Liberals, Amanda Stark for the Green, Matt Millar for the New Blue, and Brigitte Belton for the Ontario Party. 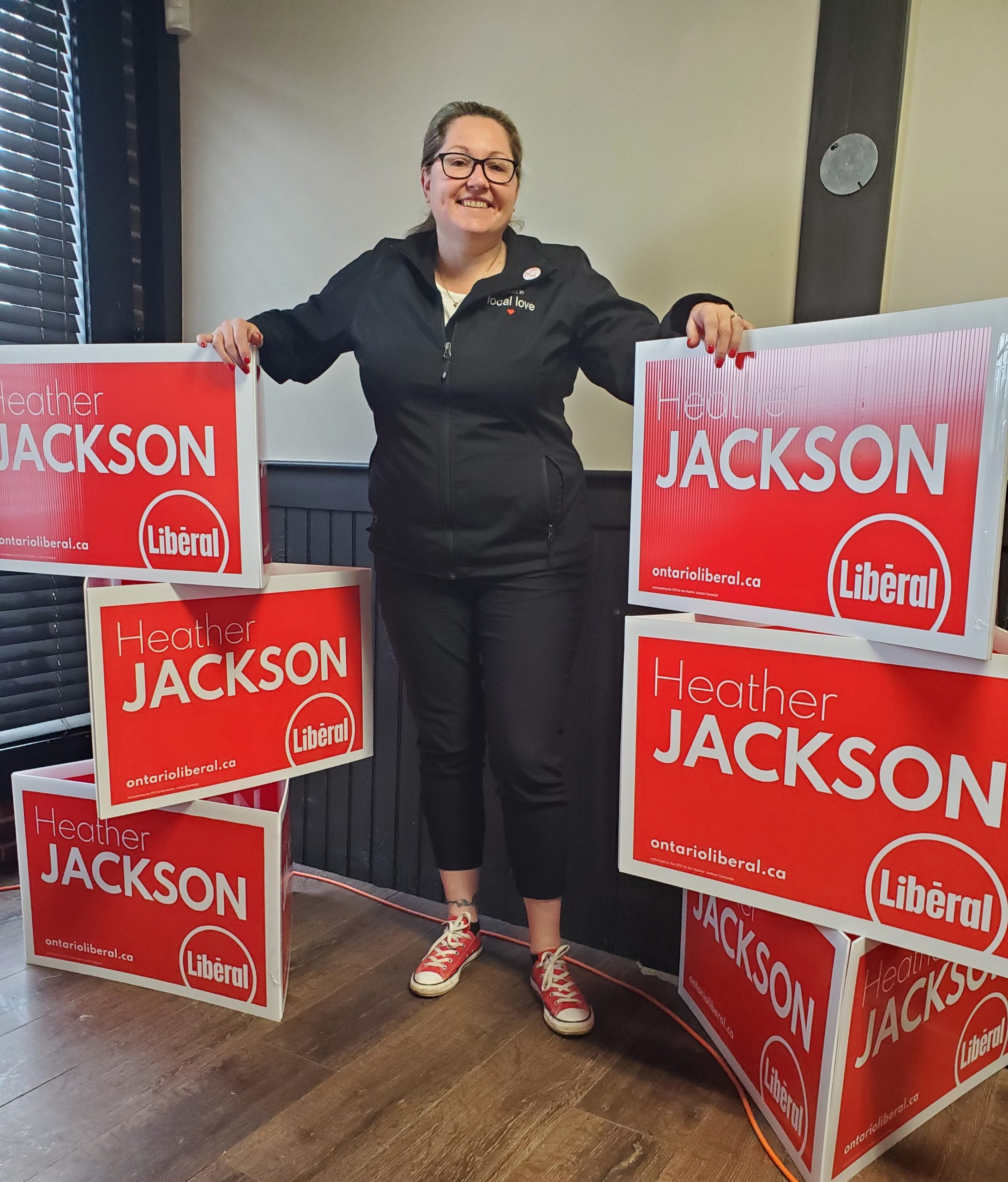 “My grandpa once told me ‘Get in, or get out’ of politics,” Heather Jackson said in a recent interview. She served 15 years on St. Thomas Council, two terms as a Councillor and two terms as Mayor, before former Conservative Party of Canada Member of Parliament (MP) Joe Preston unseated her in 2018.

“My grandpa wanted this community to get better for his grandchildren,” continued Jackson. She and her husband Jeff Butler live in St. Thomas.

With nine nieces and nephews in the riding, Jackson said “they’re the reason I’m doing this. Affordability in this riding is unreal right now. It’s shameful. The choice is up to the voters. Do we want to do better, or do we want more of the same?”

Jackson, 45, was born and raised in Elgin County, living in St.. Thomas and spending loads of time on the Marks Family Dairy Farm, on Ferguson Line, north of the city. Her grandpa John Marks, who passed away in 2011, was the father of Central Elgin Deputy Mayor Tom Marks.

She was a tomboy, farm-girl as a child, “milking cows and helping bale the hay. Driving a tractor was how I learned to drive,” said Jackson. She went to New Sarum Public School, then Parkside Collegiate Institute.

After high school, Jackson planned to go into nursing, but neck and back injuries sustained in a serious traffic accident forced a course correction. During a period of convalescence, “I realized nursing wasn’t my calling” and she instead took a job at a special events company in London.

Her new career path led Jackson to the Old East Village Business Improvement Area (BIA), in London, where in 2003 she was inspired by former Member of Parliament Joe Fantana, Liberal MP for the riding of London-Middlesex from 1987 to 2006, and mayor of London from 2010 to 2014.

The then-27-year-old Jackson joined 23 people competing for seven seats on St. Thomas Council. “I wasn’t sure, I just put my name in. I was very surprised to see on election night that I had secured a seat.” From 2006 to 2010, Jackson also worked as a fundraiser for the United Way of Elgin-Middlesex.

“I love my community and when Jeff (Yurek) decided he was stepping down, it sparked my interest,” said Jackson. “My unique experience with the United Way, and having been a small town mayor, it’s important to get that voice around the table in Toronto. I’m a collaborative leader. I believe in listening to what’s going on.” 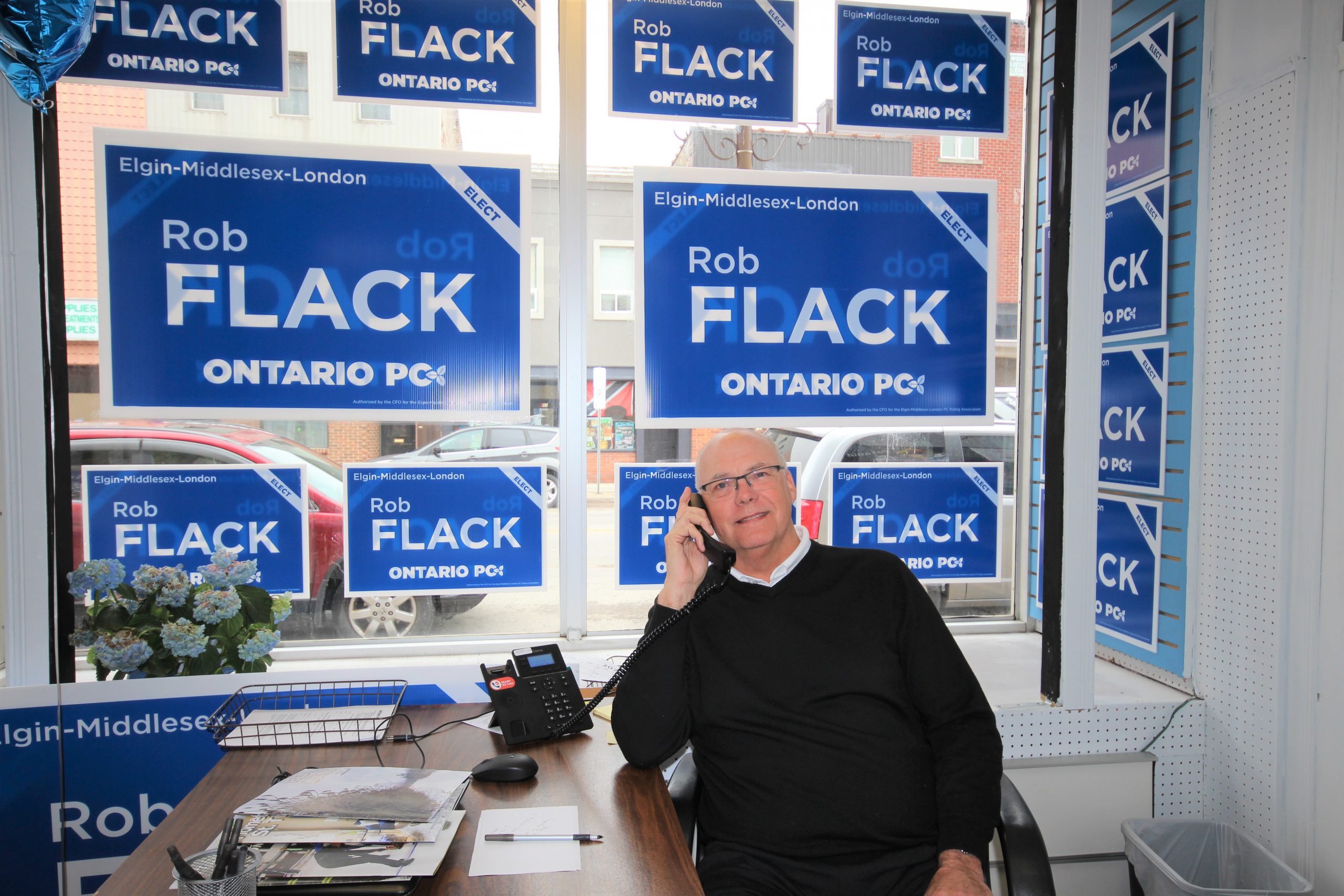 Rob Flack was nominated PC candidate in January. “I’ve been on my listening and learning tour. I’ve been everywhere, man,” he said with a chuckle, borrowing a song lyric made famous by American singer-songwriter Johnny Cash.

“We’ve been getting good feedback,” added Flack, who was defeated by Liberal MP Arielle Kayabaga in London West riding in the 2021 federal election.

Flack, 63, is Chief Executive Officer at Masterfeeds, a London-based, national agribusiness. He graduated from University of Guelph after studying agriculture, then joined Masterfeeds and rose quickly through the ranks to become its youngest-ever CEO in 1993.

He has lived in Dorchester for 30 years, but grew up in Streetsville, now a part of Mississauga. A fundraiser for former Conservative Party leadership contender Peter McKay, Flack is married to Denise Flack, lead singer of the Juno Award winning band Leahy. Their children are Emily, Rob and Denise.

Growing up in Streetsville, Flack’s idols included ‘Hurricane’ Hazel McCallion and Bill Davis. McCallion, a Canadian businesswoman and retired politician, now 101 years old, served as the fifth mayor of Mississauga from 1978 until 2014. Davis was the 18th premier of Ontario from 1971 to 1985.

“When she was running for mayor, I was in high school and helped with her campaign,” added Flack, who operates Dorbay Polled Herefords, an Ottawa Valley cattle farm he bought from his mother Esther Fraser, 86, and father, Jim Flack, 90, of Pembrooke. “I went to school with Hazel’s kids. Streetsville was a small town then. That’s probably how I got my conservative roots.”

With one million people forecast to settle in the Great Lakes region in the next five years, Flack views the rapid growth with caution. “I always say it’s a big opportunity,” he said, adding that growth also brings tremendous pressure to build necessities such as roads, bridges and hospitals.

“As this province grows, infrastructure is crucial,” said Flack. “It’ got to be done. It’s been neglected for 30 years. We live in the garden of Eden down here (and) we’ve got to be able to support our farmers, (but growth) is going to involve intensification (and) we have to get shovels in the ground faster.” 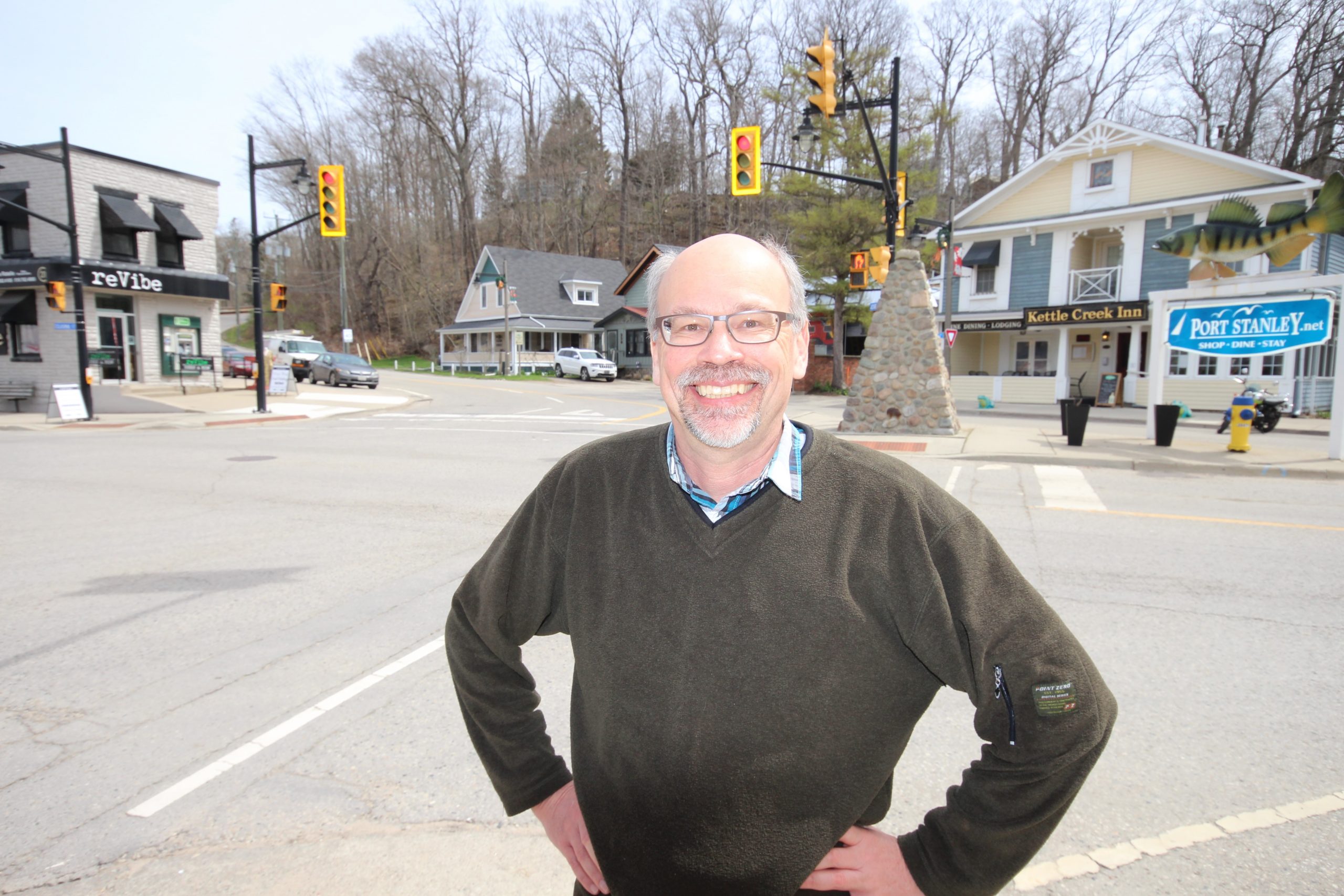 The executive director at West Elgin Community Health Centre, Andy Kroeker, 59, was recently acclaimed as the NDP candidate for Elgin-Middlesex-London. He’s a newcomer to party politics, motivated by having seen how underfunding has impacted health care in rural communities, particularly during the pandemic.

A turning point for Kroeker was meeting the NDP leader when she visited London in April. “Andrea announced mental health care for all.

“When I see the platform … I still get goosebumps,” added Kroeker. His wife is Louise Pitre and they have two adult children, Nathalie and Daniel. “There are lots of promises that are hopeful and helpful. We take care of people who no one else wants to.

“To me, those are the kinds of things I can fight for,” he added. “They align with my values.”

Kroeker grew up in Ottawa, in a family of eight children. At Carleton University he earned a Bachelor of Science degree, and a Master in Public Policy and Administration (MPPA), with a focus on environmental issues. “The environment has always been one of my passions, but I couldn’t make it work.” So, his first jobs were with the transit authorities in Ottawa and London. Eventually he accepted an administrative position at the Elgin County Board of Education, before moving on to join West Elgin Community Health Centre.

“To hear that the answer to poverty is to give everyone jobs and put shovels in the ground, it’s so simplistic,” he said. “It’s not a human solution. For me, it’s about giving people dignity and a fair shot. I want to channel people who want to make the world a better place.”