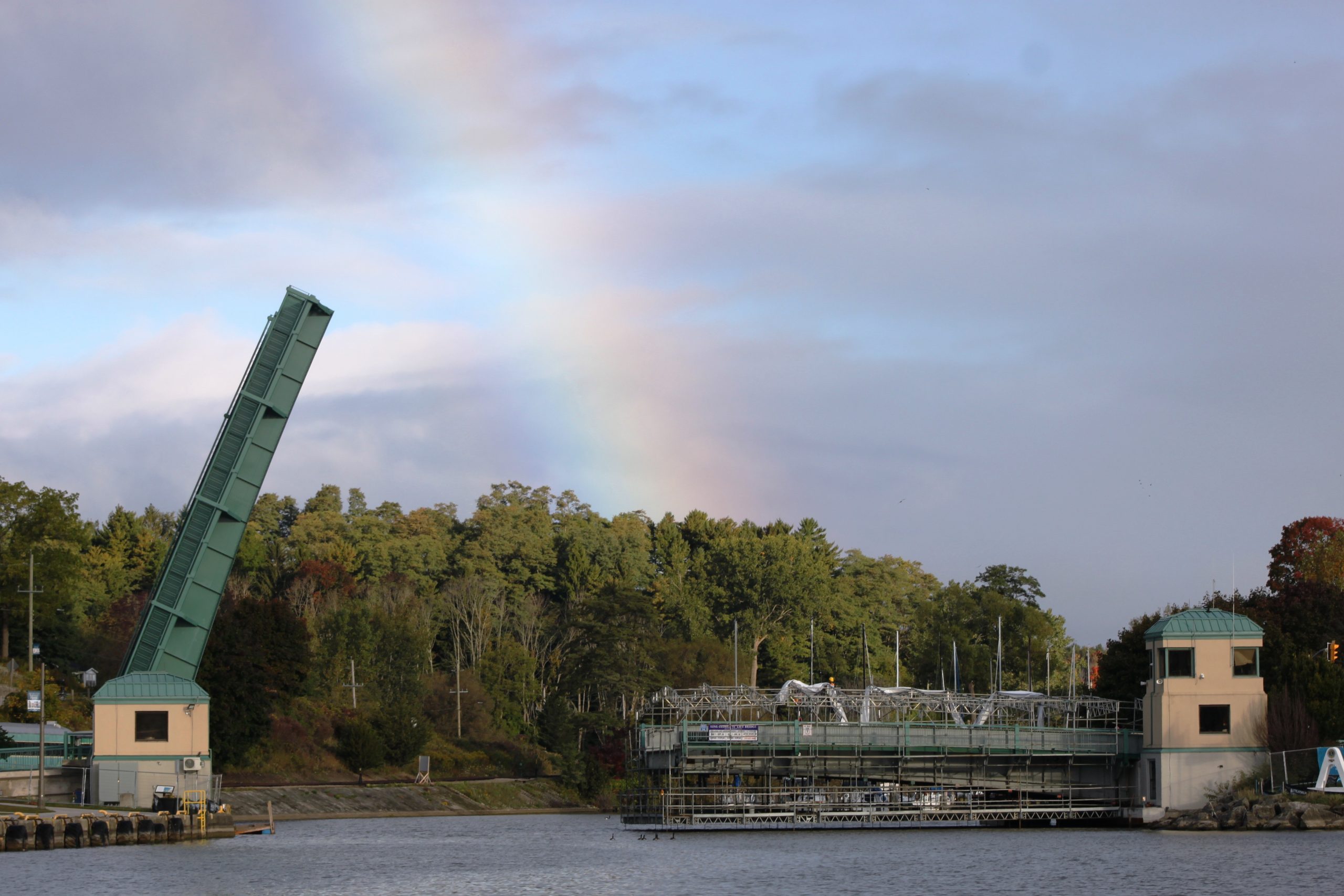 Joe Konecny, the editor and publisher of NorthShoreBeacon.ca asked if I could write an article dealing with the Port Stanley bridge. The bridge has been around for a long time, as long as I have. It was built in the same year that I was born. I managed to find Joe this bit, which I wrote several years ago. It is a bit long, but I think many North Shore Beacon readers will be interested.

The King George VI Lift Bridge: what a wonderful name for a bridge, evoking images of the glory of the British Empire and the strength of the Dominion of Canada. Like most Port Stanley residents, I take the lift bridge rather for granted, but sometimes on warm sunny summer afternoons I find myself standing with the tourists and watching the two spans rise slowly and majestically in the air. It is at times like these that I wonder what the world must have been like in 1939 when the bridge was first opened. William Lyon Mackenzie King was Prime Minister of Canada, and King George VI was two years into his reign. The king was visiting Canada on a triumphal tour that spring, and royal sentiment was running high. Otherwise, the bridge might have borne the name of the long-forgotten Minister of Transportation for Ontario, T.B. McQuesten. The McQuesten bridge? Nah. Doesn’t make it.

The building of the bridge, at a cost of $250,000 represented a considerable accomplishment for Port Stanley, although it was by no means the first bridge built across the mouth of Kettle Creek. A village plan dated 1843 shows a bridge near the site of the current bridge. This was a swing bridge, which is said to have been swung only once, and some time prior to 1865 it was replaced by a wooden stationary bridge. In 1884, another wooden bridge of the Howe Truss type was constructed, and in 1894 that was replaced by a two-span steel truss bridge. By 1937, when construction was started on the present lift bridge the previous bridge was in an advanced state of disrepair. Repeated attempts to get the federal government to fund a new bridge had failed, and it was only when Mitch Hepburn, a “local boy,” became premier of Ontario that provincial government funding for the bridge was found. Pork barrel politics? Hey, let’s not look a gift horse in the mouth. The bridge which was eventually built was a model of “modern” engineering, and the first of its type built in Ontario. Its two 70-foot steel spans could be raised to an angle of 87 degrees, and its deck was covered with a new type of steel mesh flooring which prevented the accumulation of snow and ice in the winter.

The work of building the bridge started in 1937. One of the first steps in construction, as in the construction of any bridge, was to build coffer dams around the site of the pillars which would support the two ends of the bridge. These coffer dams were constructed of 3/8-inch-thick steel sheeting, driven 30 feet into the ground, and reinforced by 12-inch square timbers.

Work had been progressing smoothly and at the beginning of December 1937, a night shift was added to speed up the construction. On the evening of December 19, 13 men were working inside the east coffer dam, 29 feet below the surface of the water. Illumination was supplied by the light of electric bulbs strung along the top of the dam. It was a cold night, and pan ice had drifted in from the lake, pressing against the sides of the coffer dam. Perhaps it was the force of the ice which proved too much for the reinforcing timbers, or perhaps it was the water of Kettle Creek, swollen by a week of snow and rain, but with a loud crack, the dam started to collapse.

A survivor, William Hume, was quoted in the St. Thomas Times Journal. “I looked up and the timbers were breaking like matchwood over my head. I never saw anything like it. I tried to paddle about with my hands, but my hip boots filled with water and held me down. I was struck
by several pieces of ice. I started upward to try and reach the ladder when something hit me and knocked me to the bottom. I gave up the ghost then and said goodbye to everything. Then the water began to churn, and I began to rise. I grabbed a cable and before I knew it, I was at the top.”

Eight of the men were not as lucky and lost their lives in the disaster. Work on the bridge was stopped until the following spring, and then proceeded uneventfully. On May 15, 1939, the bridge was finally opened with much fanfare. As the St. Thomas Times Journal reported, “Port Stanley was in gala mood and attire for the big occasion. Her school and business places were closed, and her citizens were out en masse to witness the ceremonies and to extend a collective welcome to the visitors.” Mr. McQuesten spoke at length about the possibilities for development of the inner harbour which had been made possible by the construction of a lift bridge and envisioned the day when villages like Port Stanley would be ”busy cities, strategic points in a great industrial and transportation system.” Other speakers talked about the ocean liners which would one day be sailing under the new lift bridge.

These predictions have fallen somewhat short of reality, but the bridge has served Port Stanley faithfully for the last 82 years. I wonder how many times it has gone up and down during that period? It is recorded that in 1975, the bridge was raised 5,031 times. 5,000 multiplied by 60 represents over 300,000 times that the bells may have rung, the traffic gates closed and the machinery that drives the bridge rumbled into life. The bridge (was) operated by two 25 horsepower (HP) electric motors which (took) two and a half minutes to raise the bridge to a near vertical position. People often wonder(ed) what happen(ed) if the bridge ha(d) to be operated in the event of a power failure. Believe it or not, the machinery (was) so finely balanced that it (could) be operated with a power drill, and the bridge operator ha(d) a gas powered generator at his disposal. Or, if the worst (came) to the worst, the machinery (could) be cranked by hand, although it would take close to an hour to raise the bridge to its full 87 degrees.

If you would like to see a memento from the early days of the bridge, contact any member of Heritage Port, the Port Stanley Historical Society, and they can show you, in the Heritage Port archives, the kerosene lanterns which could be lit in the event of a power failure. These were situated beneath the deck of the bridge and pivoted as the bridge rose so that boats waiting to pass under the bridge would see a red light when the bridge was down and a green light when it was raised.

Bridges do define a town. San Francisco may have the Golden Gate Bridge, New York may have the Brooklyn Bridge, but Port Stanley has the King George VI Lift Bridge. How else could we have made it to the super bowl?

Writing this, I think about 20 years ago, I added a postscript, “For the two of our readers who don’t know it (my wife was one of them) our bridge starred in a Bardhal commercial which was shown during the Super Bowl a few years ago.”  If I remember the commercial correctly it showed a car, presumably using Bardhal motor oil, jumping the gap in the opening bridge.