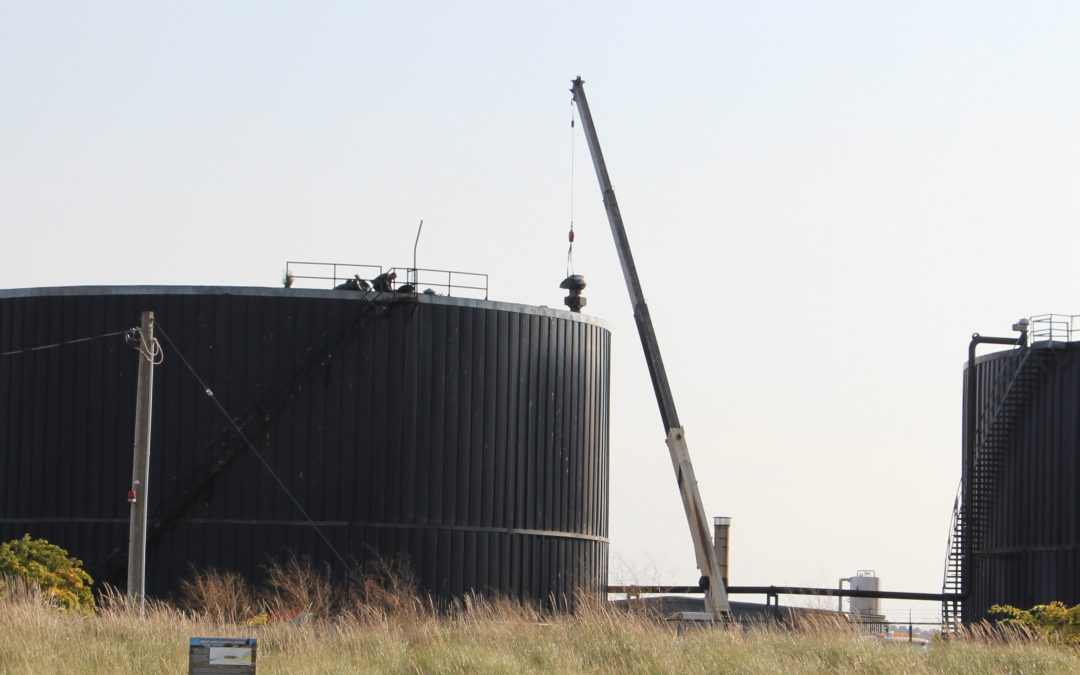 The statement – coming from McAsphalt’s Toronto head office – casts a dark shadow over Port’s Main Beach, one of only 40 in Canada with Blue Flag status, representing the community’s commitment to strict water quality and safety criteria.

It’s also a blemish on the Port Stanley Harbour Plan, which promises to retain 70 per cent of the east and west harbour lands for public uses, such as waterfront parks, a pedestrian promenade and parking.

“They have the right to stay if they choose,” said Sally Martyn, Central Elgin Mayor. “We have no control over that.

“All we can do is make sure they are not spreading contamination onto Central Elgin owned land,” added Martyn. “Of course, we would like to have the property changed to fit with our Harbour Plan but can only move on this if they want to sell.”

Van Dyk’s remark contradicts McAsphalt’s May 3, 2018 letter to Carlow Road residents, in which the firm’s Joel Gardner suggests an exit strategy is in the works. “We are reaching out to all the residents adjacent to our facility, located at 100 Carlow Road, to inform and update you on our plan to decommission the Port Stanley facility,” wrote Gardner, McAsphalt’s Corporate Health, Safety and Environmental Manager.

Van Dyk’s commentary also challenges the projections, maps and charts that Central Elgin shared at Harbour Plan public meetings, all failing to show the black tanks on the beach. 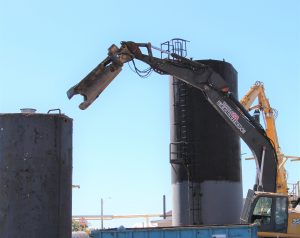 Further, the statement deflates any high hopes generated by the demolition and removal of two of the smaller McAsphalt tanks several weeks ago and the 2018 demolition of one of the larger tanks.

“McAsphalt is currently undertaking environmental work to determine the extent of contamination at their property and if remediation is required for their site,” said Gary Wheeler, a spokesperson for the Hon. Jeff Yurek, Member of Provincial Parliament (MPP) for Elgin Middlesex London, and Minister of the Environment, Conservation and Parks.

“The local ministry office continues to actively work with McAsphalt, and their consultant on their environmental management issues to mitigate any potential adverse effects,” Yurek’s statement continues. “The local ministry office is not aware of any future development plans for the site and therefore, at this point it would be inappropriate to comment on the specific requirements.”

While McAsphalt’s corporate social responsibility (CSR) policy suggest it “aims to embrace accountability for our company actions while encouraging a positive impact on the environment and stakeholders, including customers, employees, communities and others,” Van Dyk refused further comment.

“In response to (North Shore Beacon’s) request (for more information), it is not our practice to partake in interviews unless it is in exceptional circumstances,” said Van Dyk. The CSR policy is part of McAsphalt’s International Organization for Standardization (ISO) certification.

North Shore Beacon has submitted a Municipal Freedom of Information and Protection of Privacy Act (MFIPPA) inquiry, seeking information about McAsphalt. After nearly a year of patient waiting, plus $90 in fees, Central Elgin Chief Administrative Officer and Clerk Donald Leitch has revealed very little. There is some suggestion that once the McAsphalt site is in public hands, the municipality may use it as a roadway and parking lot, however, the editor will write more on this subject once the third and final batch of documents is received from Central Elgin.

McAsphalt’s tank farm is a grim reminder of Port Stanley’s roots in Canada’s oil and gas industry. According to Lament for a Harbour: Port Stanley, a history book by Frank and Nancy Prothero, published by Nan-Sea Publications, the McAsphalt tank farm was originally built by Shell Oil in the early 1940s. 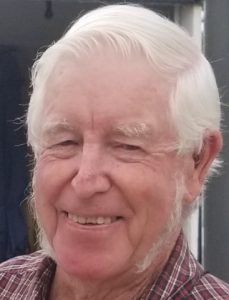 “Shell was anxious to compete in the lucrative fuel market of Southwestern Ontario and built its first tank in Port Stanley on the west dock at the present site of McAsphalt,” the Protheros’ book states. “Pipes and pumps were installed to unload the boats and reload fuel into railroad cars and trucks.”

Joe McManus’ Sterling Fuels acquired Shell’s assets here in 1950. “As the owner of Red Star, which (McManus) established in 1938, he had parlayed a small operation into a string of more than 200 service stations throughout Southwestern Ontario, most of them additions to existing variety stores …

“ … McManus was able to service these growing markets from the tanks he acquired in Port Stanley,” the Protheros’ book continues. “ … Oil tanks began to pop up in various locations and one of the most bitter elections in the history of the village resulted when (McManus) was given permission to lay pipelines along Colborne Street for a proposed oil tank farm on the lands behind Christ Church. The resulting furor prompted (McManus) to withdraw the plan …

“ … Sterling Fuels eventually owned five tank farms or plants in various parts of the village with a capacity of 30 million gallons. This made Port Stanley a regional centre for the distribution of fuel. Most of the tanks in the village have been dismantled and their exact location will be forgotten with the passing years … ”.

The oil crises of the ‘70s, along with Pierre Elliott Trudeau’s 1980 National Energy Policy, initiated the “slow conversion of Port Stanley from a working community to a retiree community,” according to the Protheros. Ultramar bought Sterling Fuels’ assets, as “the oil industry at Port Stanley died a slow death” and finally, McAsphalt bought the empty oil tanks in 1980. According to the book, the Port Stanley terminal is no longer used for production, just storage.