More to craft than skulls and flames: Elgin artist 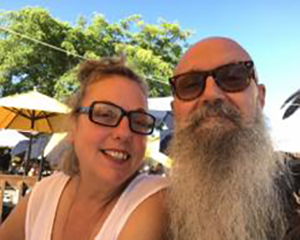 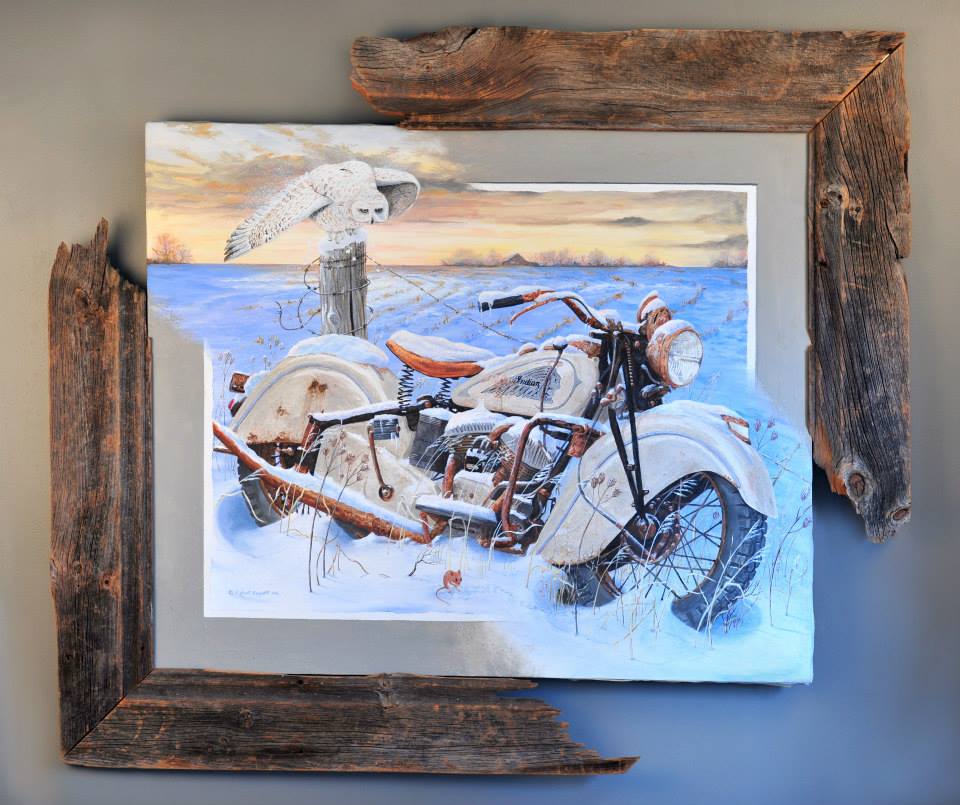 There’s no denying, however, that the dream-like landscapes and Indian Motorcycles which Kristoff renders on canvas these days owe a great debt of gratitude to the airbrushed vans and motorbikes of his past.

“I learned a lot of my airbrush skill from watching other artists with my father at the annual January Custom Car and Motorcycle show in Detroit,” Kristoff said in an interview. “One artist in particular, Ivan Benic, from Windsor, was a great inspiration to me.

“After a couple of decades and many ‘best paint’ awards, I found myself becoming bored with the repetitive nature of painting skulls and flames on motorcycles,” he added. “So, I hung up my airbrush and went back to painting on canvas, this time with acrylics for their fast drying time, which was a carryover from spraying lacquers.”

Originally from St. Thomas, Kristoff grew up using oils to render landscapes with his father but started spray painting murals on custom vans and chopper motorcycles at the age of 12 years. His father Karl and mother Kay Kristoff were successful hair stylists in St.  Thomas for over 20 years.

Kay was also a fashion designer and pattern maker in Toronto during the ‘40s. Karl was a landscape artist. When he wasn’t dodging bullets during the Second World War, Karl also did decorative painting and lettering on the fuselage of British bombers and tanks.

“Born to artistic parents, as soon as I could hold a crayon, I began drawing everything I saw,” said Kristoff. “I would excel in school subjects that required drawing, but not much else.”

Kristoff avoided formal art training “because I felt that I was taking the desk of someone who couldn’t draw or paint.” Yet he filled his high school notebooks with sketches of cars and motorcycles. Then, drawing on his father’s passions for nature and landscapes, Kristoff combined the influences with his love for the unique design and rarity of Indian Motorcycles. 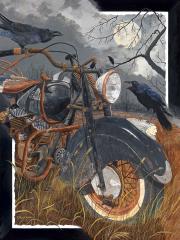 “Not painting shiny chrome,” he said, “but rusty neglected metal, or what I call ‘barn fresh,’ because the patinas of decaying metal take on the colours of earth and nature.

“I like to add animals and birds, owls especially, and the interaction of nature and manmade machines,” he continues. “My paintings at art shows always evoke stories and memories from some of the patrons and it is a pleasure to hear them.”

Art has guided Kristoff’s life choices. He designed landscapes for a period, then kitchen cabinetry, before finding work in the film industry in Toronto. He met “the love of my life,” eventually his wife, Sandra, in Toronto. She designed costumes for the Phantom of the Opera in the ‘90s, while he was building movie sets. “We attended art openings almost nightly and have many artist friends in all different mediums in Toronto.”

When tragedy struck, he returned to St.Thomas to help his father cope with Kay’s death.

“Knowing that I would not be returning to that life in Toronto, I brought Sandra down to see where I grew up,” added Kristoff. “She was not impressed with St. Thomas, so we came to Port Stanley … Sandra fell in love with Port and the large artist community here and then and there, we decided to move to Port Stanley.”

The Kristoffs have lived in a Victorian home, built in 1878, on Colborne Street, since 2002. They now have two daughters, Sasha, 30 and Molly, 17. “The crashed boat in my front yard is my folly,” he laughs. “It was going to be a fountain until I found out it would require me fencing in my front yard … so for now it’s just a landmark for people to giggle about.”

Kristoff joined the local arts groups and took part in local art shows, but soon discovered a niche market on the Internet where he connected with fans and collectors in 22 countries. He has also partnered with Wolf Motorcycles, on Hyde Park Road, in London. The Indian Motorcycles dealership is a showcase for his work, allowing him to sell limited edition prints. He hopes to expand to other dealerships soon.

“My fascination with bikes came at an early age, during one of our family trips to Europe, where I saw cafe racing for the first time,” Kristoff recalls. “After that I was hooked.

“I rode for a short while, on a 900 Ninja, at a time when I was an adrenaline junky,” he added, “but I nearly lost a leg in a crash and have only ridden a little since then.” Kristoff still pines for an affordable vintage Indian Motorcycle, but for now, lives on vicariously through his art.