By Craig Cole
(December 2018) – A recent issue of Port Stanley Villager published a photograph, taken about 100 years ago, which showed a streetcar operated by the South Western Traction Company on Colborne Street in Port Stanley. Several of our Villager readers have evinced an interest in the South Western Traction Line which, in the early years of the last century, was an important transportation link for our little village, carrying 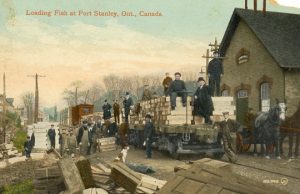 people and fish from Port Stanley to St. Thomas and London.

Imagine that you were living in London in November of 1909. The first Sunday of the month has dawned as a sunny day and you decide to take a trip to Port Stanley to check out the new Stanley Beach dance casino which everyone is talking about. Should you take the good old London and Port Stanley Railway, or opt for the newly built traction line? The official name of the company is the South Western Traction Company, but everyone is simply calling it the traction line. You are not sure which option is best for a day trip to Port Stanley, so you decide to talk to your cousin Jim, whose wife was born in Port Stanley. Jim reminds you that the L&PS has leased its tracks to the Pere Marquette Railway and says that he is hearing a lot of complaints about the service. Steam locomotives are noisy and smelly, Jim reminds you, while the traction line relies solely on clean electrical power, generated at its own generating plant at Chelsea Green, in London. 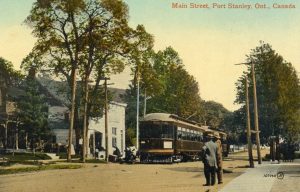 Well, yes, you admit, but you have heard that the traction line follows a less direct route than the L&PS, passing through Lambeth, Tempo, Talbotville, St. Thomas and Union before getting to Port Stanley. There are 100 stops along the route where the traction line could pause to take on or discharge passengers. This could make for a slow trip.

Jim tells you that the South Western Traction Line was chartered by the provincial government in 1902 and started operation in 1906, although its tracks did not reach Port Stanley until 1907. The first traction line streetcar entered Port Stanley on October 29 of that year. Jim says that in its second year of operation the traction line carried over 400,000 passengers.

You eventually decide to make the trip on the traction line and arrive in Port Stanley at the station shown in the accompanying photograph.

The traction line did not remain in operation very long. In 1915 the decision was made to electrify the London and Port Stanley Railway, which had regained control of its tracks from the Pere Marquette Railway. This would prove to be a death knell for the traction line. Another problem for the traction line was that it operated under a provincial charter instead of the federal charter which governed the L&PS. In 1911 the provincial government passed the Lord’s Day Act which prevented the traction line, which by 1911 had been renamed with the glorious title of the London and Lake Erie Railway and Navigation Company, from operating on Sundays. The L&PS, because it operated with a federal rather than a provincial charter was able to continue operating seven days a week.

In 1918 the traction line ceased operation and the big decision for day trippers who wanted to get from London to Port Stanley was whether they wished to trust their lives to that new-fangled invention the automobile.