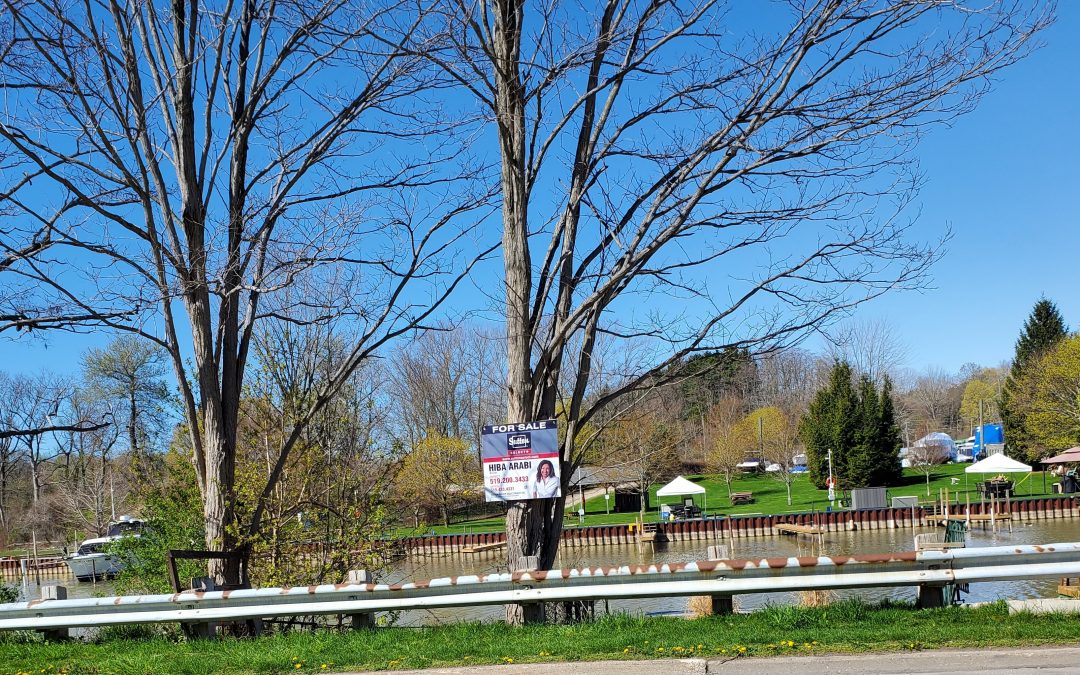 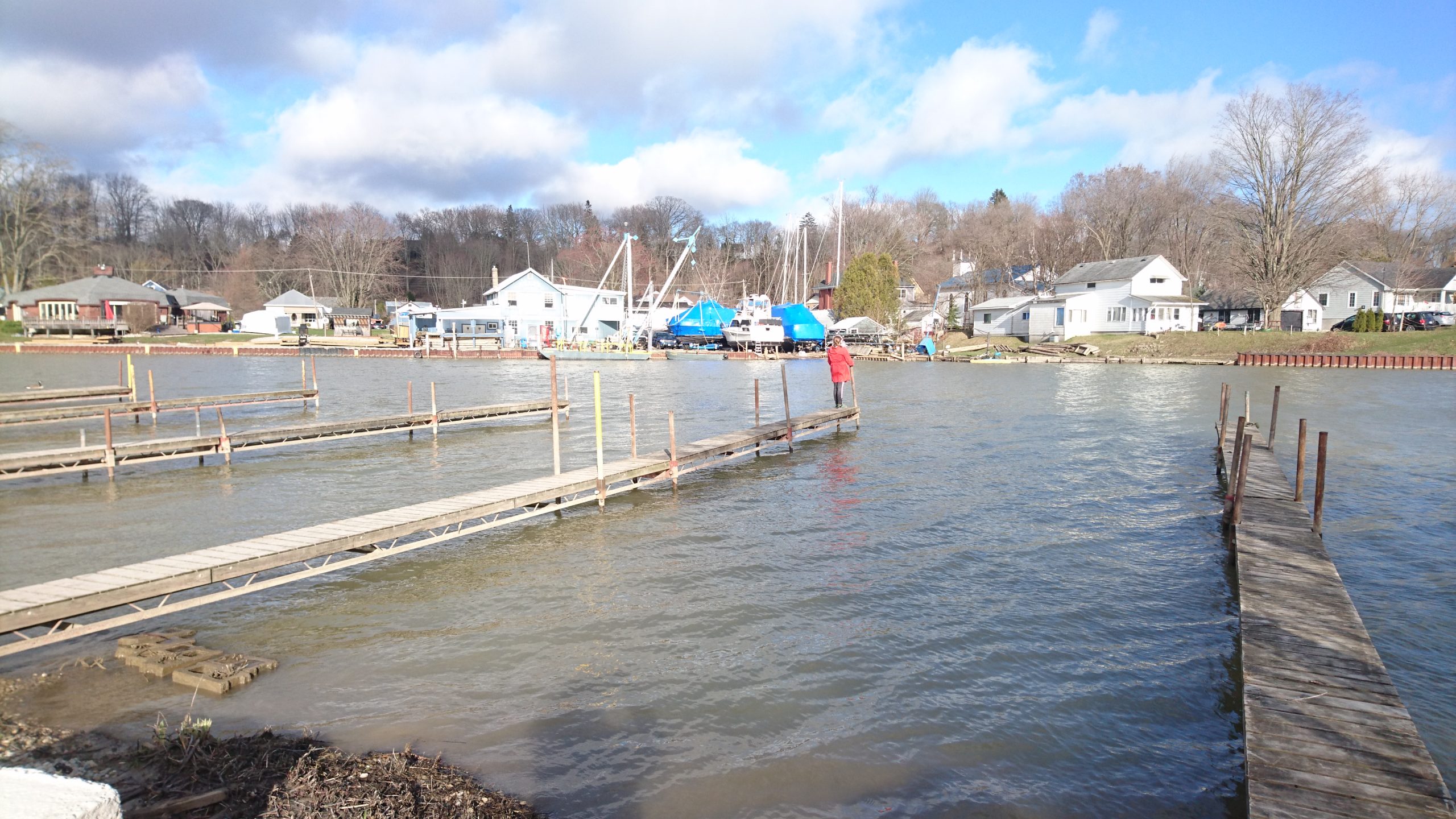 Everybody knows Port Stanley ‘lives and dies’ by Lake Erie and Kettle Creek. It always has, probably always will.

The local culture, the economy, and its friendly, hard-working populace, have all been uniquely inspired by the ebbs and flows of the harbour.

Commercial and recreational fishing; marinas; businesses benefiting from beach visitors; and artists chronicling the magnificent vistas: they are all vital elements of what Deputy Mayor Tom Marks calls the ‘Jewell of Central Elgin.’

Where the village came from and what the future holds for ‘Port’ and surrounding jurisdictions is top of mind these days, as locals prepare to take a guided tour of the Central Elgin (CE) Official Plan and the Port Stanley Harbour Secondary Plan.

The momentum of change here – including a wave of active and imminent developments, and skyrocketing property prices – has alarmed villagers. Fears of losing the community’s traditional charm are stoking social media outrage, and expectations are high as the municipal review process gets underway. An online Zoom public meeting is scheduled for June 16, 2021. 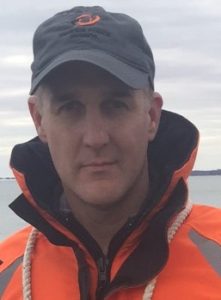 “When I engaged on the original (CE) harbour consultation a few years back, my comment was ‘do everything you’re going to do ashore, just make sure you continue to maintain Port Stanley as a viable commercial port’,” said Derek Niles, whose Port-Stanley-based business interests rely on the harbour.

By viable commercial port, Niles is primarily referring to the need to extend the west breakwater by a couple hundred meters. Planners believe a breakwater would better manage the flow and surge of Lake Erie, protecting vessels docked in the harbour and minimizing property damage from flooding. CE has studied the matter for some time, however, costs and environmental considerations seem to have stalled a resolution. Past harbourfront studies also refer to construction of a 300-boat marina in the East Headlands, a Stork-Club-like facility, a six-storey casino and a marshland habitat created with harbour dredgeate. Of course, all of these projects would rely on regular harbour dredging to control flooding and sustain recreational and commercial activities.

Ironically, these projects are just briefly mentioned in the broad strokes of the Official Plan, and the Secondary Plan. Yet arguably, they are cornerstones of CE’s stated overarching plan to provide “the framework for growth, development, and protection of built and natural heritage assets across the municipality to 2046 (25-year time horizon).”

“The oil and gas guys need to come in here to drop stuff, the fishing tugs need the services to get here, companies like mine need to be able to use this harbour commercially,” added Niles. Orange Force Marine is his commercial and tourism marine services company. Niles lives in Port and docks his boat, Orange Apex, in the harbour.

“If you just want to make it a pleasure craft harbour, well then, okay, but you’re cutting down on your potential industry base,” he added, “and then we just become a cottage community like Honey Harbour, as opposed to a viable … and thriving community like Oakville.

CE’s review process has certainly got the attention of local marina operators. 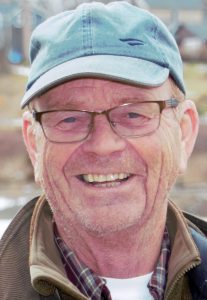 “It’s a changing town, a changing dynamic,” said David McNiece, proprietor at Stan’s Marina. “I don’t understand why the municipality doesn’t consider the value of this creek in its plans.” His “conservative estimate” is that Port’s marinas are the gateway for a $2.5 million a year recreational boating industry, second only to the commercial fishing industry’s impact locally, somewhere in the range of $10 million.

“For sure, (CE) should be doing something about planning for a marina, otherwise they will have none,” added McNiece. Dock space is currently not available in Port, he said, and without additional capacity, boaters – “a good chunk of it is new people who’ve just moved here” – are going elsewhere.

McNiece even raises the prospect of the demise of the recreational boating industry here, noting that all the properties along the east creek shoreline, between Stan’s and the Killins’ residence, have either been sold, or are for sale. Unless other marine operators have bought, or buy those properties, that could be a substantial loss of boat slips for Port. “I know a bunch of people who have gone to Sarnia. People are moving their boats all around. (Monique Killins has yet to respond to Beacon inquiries.)

“With the crazy real estate market, I don’t see it changing,” added McNiece. “If you’re going to get out, now is the time to get out. We’ll see how it goes. I suppose the lands that I’ve got will probably go to development too.”

With the commercial tax rate, and current property values, the likelihood of a privately owned marina popping up here are slim, he said. “The only ones who could afford a marina would be government.” 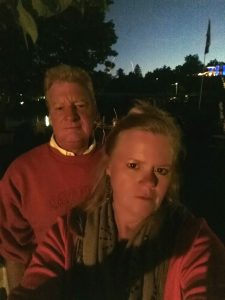 Just down the creek from Stan’s, John and Fiona Nisbet, proprietors at Kettle Creek Marina, have similar concerns.

“The housing growth that’s taking place in Port Stanley, St. Thomas and London naturally created a demand for increased boating facilities,” said Fiona Nisbet. “With the spur from COVID-19 restrictions, demand went even higher. This is a trend that will continue in the foreseeable future.”

Her husband John added: “In our opinion, only government investment, or a very large casino resort operation, could afford to build a new marina. Logistics are overwhelming. Environmental regulations, dredging costs, breakwalls and the building of quality facilities would run to $100 million plus. The payback would be over decades, so it’s really beyond any private local operator-investor.”

An alternative that’s popular in the U.S., ‘dry rack storage,’ could stack power boats three racks high, he said, however, even that option comes with a $10 million price tag.

“As the price of land, property taxes and insurance ever increase – as well as the age of the current owners – many of the existing marinas in Port Stanley will need to significantly increase rates or may well decide to sell to developers for commercial and residential uses instead,” said Fiona.

Kettle Creek Marina is popular with local boaters, but also attracts yachts from the U.S., many travelling in groups of two, three or even eight boats. “We are entering a second season of closed borders with U.S.A.,” added John. “The lack of American boaters will be felt most strongly by local restaurants and boutiques. They always made more money from our American customers than we did.”

Fiona said the recreational boating industry normally fills about 800 slips in Port. “That’s 15 times the number of hotel rooms, so yes, boating is an important way of increasing tourism spending in Port.” 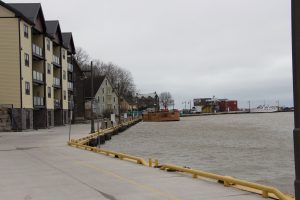 When asked about a large marina development in the East Headlands of Port Stanley Harbour, a breakwater to control Lake Erie surges, and harbour dredging, municipal officials confirm those projects are unlikely to be included in either plan. There seems to be a jurisdictional problem.

“The OP and Harbour Secondary plans are land use planning documents,” explains Lloyd Perrin, CE’s Director of Asset Management and Development. “The purpose of these documents is to review and set policy with respect to future land use – i.e. residential, commercial, industrial, natural hazard and natural heritage.

“ … A 300-boat marina would not be occurring on land and therefore would not be captured by either of the studies,” added Perrin. The same would seem to apply to marshland created with dredgeate. “Similar to the marina concept, the studies would not apply to the water lot or on land that does not currently exist.”

Perrin added that harbour dredging and construction of a breakwater “are operational issues outside of the OP and Secondary Plan. “I will however confirm that both would play a role in the physical conditions of the harbour, which are considered as part of the land use,” he added. Timing of dredging is also outside the scope of the official plan and harbour secondary plan, he added.

Meanwhile, CE has hired professional services firm Zuzek Inc. to generate a hazard analysis of Lake Erie water levels and lands adjacent to Port Stanley Harbour. The analysis will also model conditions associated with climate change. It’s anticipated that recommendations in this report may be incorporated into the Secondary Plan.

“The Port Stanley Harbour was last dredged in 2016,” said Perrin. “The municipality will once again be undertaking soundings in 2021 to determine the elevations of the creek and harbour bottom from the King George VI lift bridge south to the mouth of the harbour.  Once that is completed the Municipality will review this information and report back to Council as to the necessity of dredging.

“The actual decision to dredge the harbour will be that of Council,” said Perrin, adding that Council committed itself to regular dredging in a 2015 resolution. “I would also note that while the Kettle Creek Conservation Authority does not determine the timing of the dredging, the municipality would share the sounding information with the KCCA and work with the conservation authority regarding timing of dredging.”

Central Elgin Chief Administrative Officer and Clerk Paul Shipway confirmed: “None of those items are specifically contemplated by the Official Plan review process.

“In theory someone could utilize those items as a vision for the Municipality, with themes pertaining to the same, potentially considered for incorporation into the Official Plan,” added Shipway. “That being said, again, those items are not specifically contemplated by the Official Plan review process.” 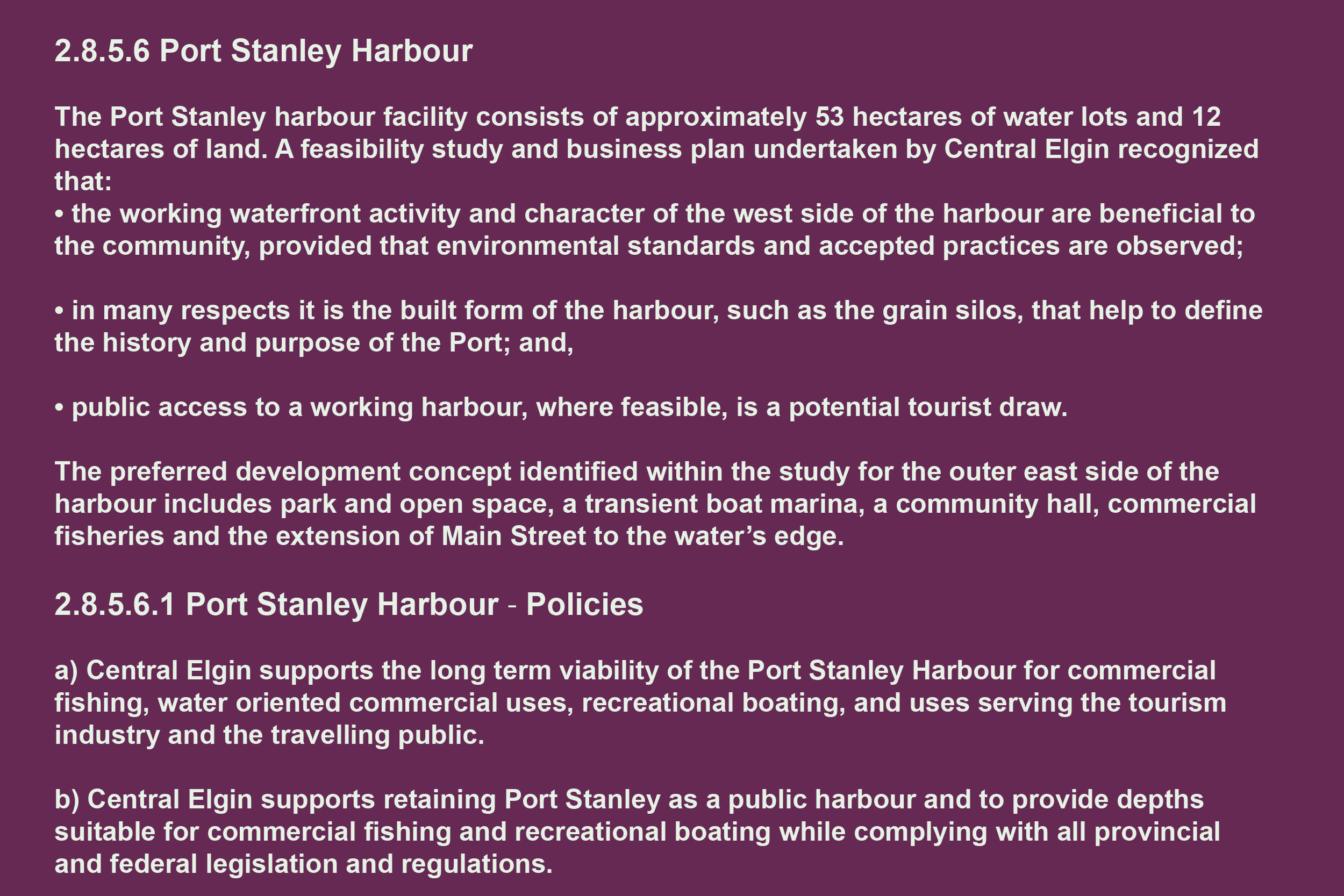