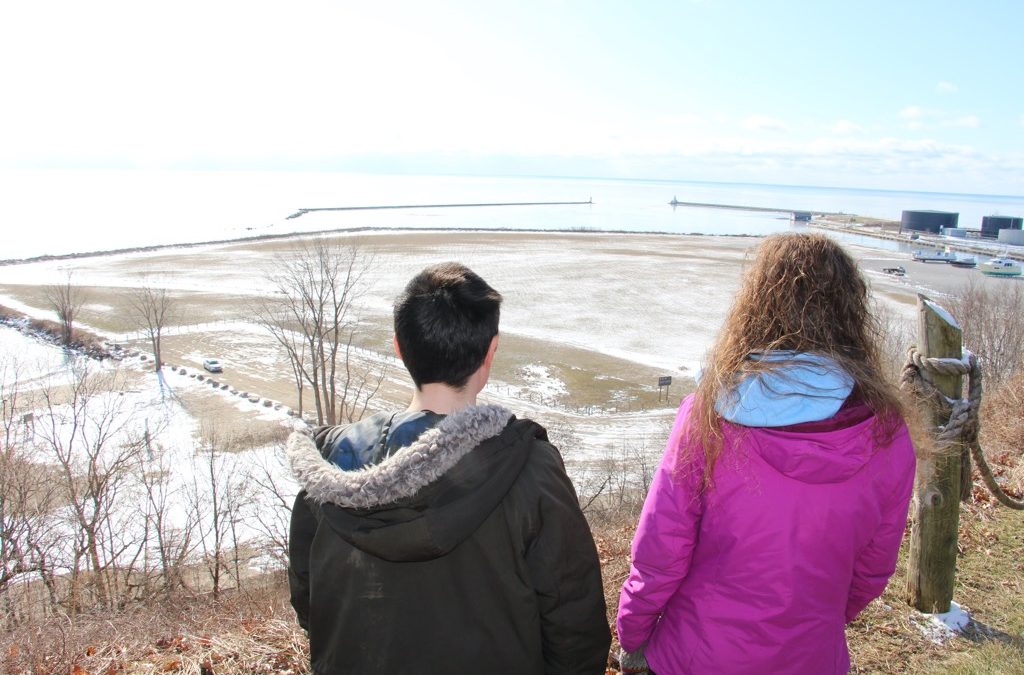 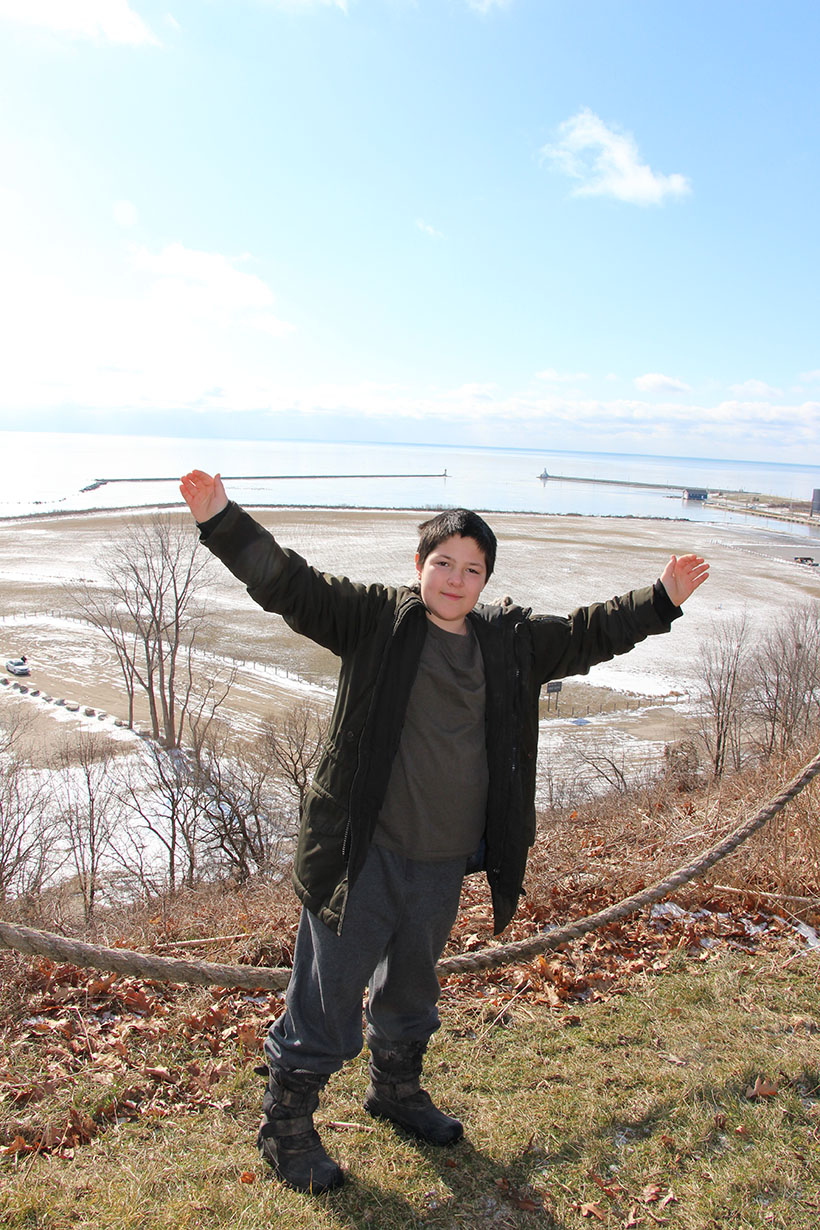 By Joe Konecny – (March 2020) The “Greta effect” may have a hand in the greening of Port Stanley’s Harbourfront.

While the impact of Thunberg’s straightforward rhetoric, and her students’ climate strike movement – Fridays for Future – is heralded around the world as the “Greta effect,” the local equivalent was championed by a 13-year-old, Grade 8 scholar.

Sitting near the front of the public meeting, accompanied by his grandmother Elaine, Moyes stood out in the crowd made up entirely of adults. His attentive gaze and no-nonsense question, however, helped frame the evening’s discourse.

When he asked whether the man-made Port Stanley Berm, comprised mostly of Lake Erie dredge material, is stable enough to sustain development of a waterfront neighborhood, the adults at the front of the room responded with affirmations of geotechnical terms.

Yet Moyes remains a sceptic on a level that Thunberg would be proud. 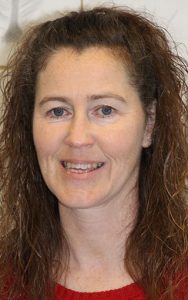 “I was still upset,” Moyes said in a post-meeting interview, accompanied by Jayna Basson, a Grades 7 and 8 teacher at KCPS. “They’ve changed their plan, but it’s still not good enough.”

The Port Stanley Harbour Plan – widely known as the “Dillon Report,” prepared by Dillon Consulting, Watson Associates, and RCI Consulting – now retains 70 per cent of the east and west harbour lands for public uses, such as waterfront parks, a pedestrian promenade and parking.

As presented at the January 30, 2020 public meeting attended by Moyes and about 150 concerned citizens, the plan now restricts commercial-residential development on the east harbour lands – more popularly known as the Berm – to a southerly extension of Main Street toward Lake Erie.

Dillon’s first public report on a Port Stanley Harbour Plan, presented in June 25, 2018, was widely criticized, particularly by the Port Stanley Village Association (PSVA), for blanketing a much larger portion of the Berm with development.

“If they develop the Berm, you’re taking away the last green space on Lake Erie,” said Moyes. “That is a big loss. They need to get the public more involved.”

Moyes’ interest in harbourfront development was stimulated by Basson’s Eco class. Students were monitoring the “Greta effect” in the news when PSVA member Nancy Moore addressed the Eco class in September, informing students about harbourfront planning. Moore also invited students to participate in the PSVA Kite Festival on the Berm last summer

“So, we looked at these protests globally and we looked at how we could express ourselves appropriately,” said Basson. At least a dozen classes were opened to discussions on the subject and students learned how to “appropriately and politely express themselves.

“Part of our goal this year was to pass our knowledge forward and share it with the community,” said Basson. “Our concern was how would people even see the Berm if there are all these buildings down there. It just didn’t seem to fit.

“We’ve all been to the Berm and have this passion that this is an important piece of land and it has to be used appropriately,” she added. In fact, Basson’s 26 students prepared letters of concern and sent them to Central Elgin Mayor Sally Martyn and the councilors. “We had a very passionate conversation in the classroom. We look at these projects as an opportunity to prepare for high school. Then Carter one-upped us all and went to the public meeting with his grandmother.”

Central Elgin’s Official Plan sets out policies guiding land use planning in the municipality. Secondary plans are part of the Official Plan and provide more detailed land use plans and policies to guide investment and development in specific areas.

The Official Plan currently recognizes that the “harbour and adjacent harbour lands are underutilized, contaminated, and require long-term remediation and regeneration,” but also offer an opportunity for “private sector investment and re-purposing.”

The Dillon Report envisions a secondary plan, comprised of 85 hectares of Port Stanley Harbour lands. It allows for a maximum of four-storey apartment buildings, with ground-floor retail-commercial space, with only two exceptions. At the base of the hill, west of Little Beach, a five-to-six storey building will be permitted. A five-to-six storey hotel on the west pier, near the D.O.C. building, will also be allowed.

“When I heard it was one of the last green spaces left on Lake Erie, I thought ‘what?’ We need to conserve it,” added Moyes. This is his second year in the Eco class. “My big picture was they plant a bunch of trees, some trails … no development, no buildings. The big problem with putting development there is that there would be more private property and no place for people to go there.”

Mayor Martyn is pleased with the evolution of the Dillon Report and believes the proposed secondary plan reflects the wishes of Port Stanley residents. “I got a whole raft of letters from the Eco class over their concerns about the Berm,” she said. “It’s an important thing to them and they care about what happens down there. Port Stanley is growing rapidly, and it needs more green space.”

At the public meeting, PSVA president Dan Ross expressed members’ support for more greenspace on the Berm. “It’s a watershed moment for Port Stanley. We’re setting the table for what the harbour will look like in 10, 15, 20 years. The key to doing that is … to respect the culture of Port Stanley. Port Stanley holds the future of the harbour in its hands.”

The Port Stanley Harbour Secondary Plan, and Central Eglin’s Official Plan must still be approved by Central Elgin and Elgin County Councils. And if both those governing bodies sign off, there are still some Provincial and Federal constraints on harbour lands development.