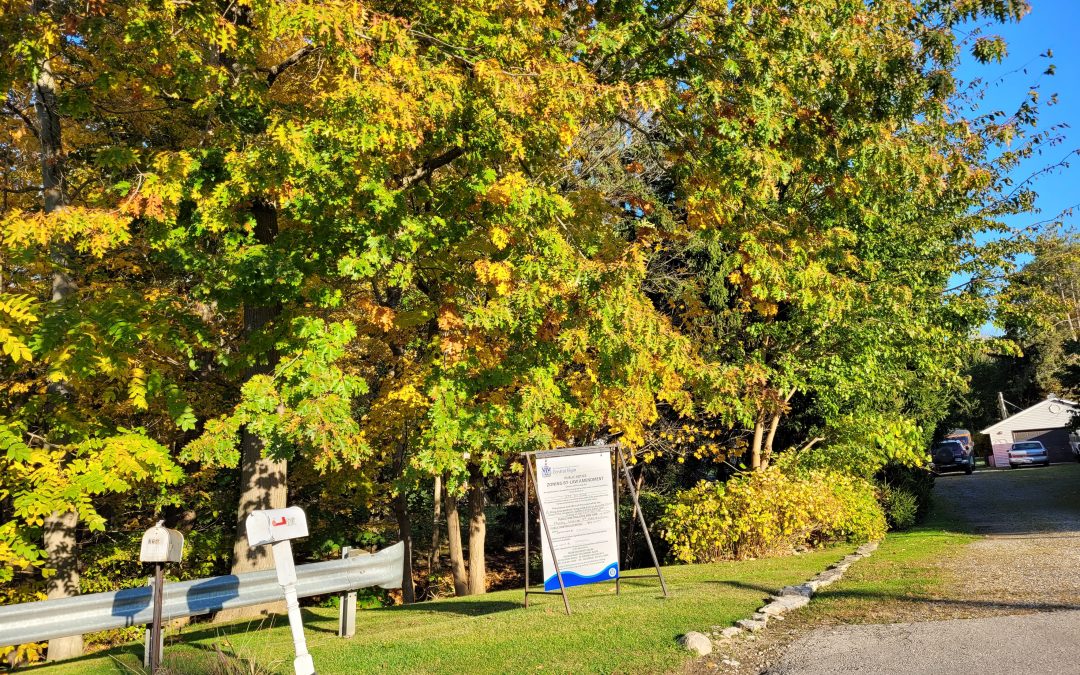 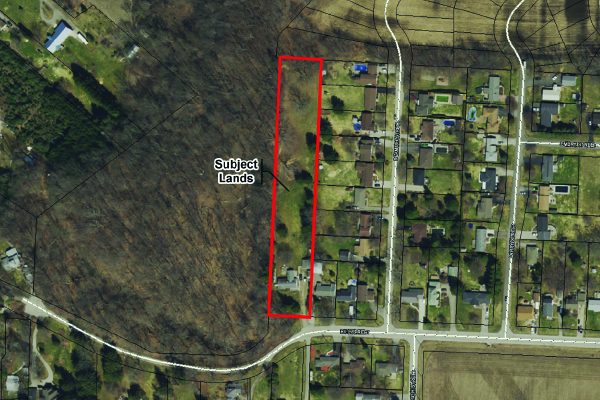 Outgoing members of Central Elgin council have passed a steaming-hot potato over to their successors.

At their last public meeting of the 2018-2022 term in office, councillors heard more than two dozen residents voice objections to a draft plan of condominiums in Port Stanley.

The plan proposes rezoning property on the edge of woodlands and a ravine at the west end of Hill Street to permit construction of 27 two-storey townhouses. The residential property has an existing detached home fronting onto Hill Street, then extends behind residential lots on the west side of Beamish Street, between those backyards and treed ravine space.

The new council and Mayor-elect Andrew Sloan, however, won’t be called upon to render a decision on the matter until sometime after they are officially sworn into office on Dec. 5, 2022. There was a clean sweep of CE councillors, mayor and deputy mayor for a whole new slate in the Oct. 25 municipal election.

“This is the meeting where we hear people’s concerns,” outgoing Mayor Sally Martyn told homeowners participating in the Nov. 14 online public meeting concerning the proposed zoning amendments and plan of condominium for the Hill Street site.

Opponents to the application by Morgan, John and Ada Pavia, at 279 Hill Street, want council to reject the plans.

Homeowners presented a long list of concerns about the proposal: everything from traffic management issues to environmental impacts, drainage, sight lines, aesthetics and provincial guidelines for housing. Rob Flack, the Progressive Conservative Member of Provincial Parliament for Elgin – Middlesex – London, has not yet responded to the residents’ inquiries about Premier Doug Ford’s plans to speed up development and intensification across Ontario to build 1.5 million homes in the next 10 years.

Rich Gruener, whose 386 Beamish Street home is one of many that the proposed development site runs behind, framed his objections around the CE Official Plans’ commitment to maintaining a “sense of place” in the community.

“A sense of place is a unique collection of qualities and characteristics – visual, cultural, social and environmental – that provide a meaning to a location,” said Mr. Gruener. “Sense of place is what makes one city, or in this instance a hamlet in a small lake town, different from another. Sense of place is also what makes our physical surroundings worth caring about.

“People in Central Elgin, specifically Port Stanley residents, care a lot about their surroundings,” he added. “Many bought here over the last few years for the beauty, the surrounding natural lands, the quiet that this little hamlet provides.

“I understand there’s no accountability for realtors who advertise green space and valley views,” Mr. Gruener continued. “However, there is accountability to the municipality and the city planners when those who did their due diligence, like myself, in investigating the land’s current zoning and bylaws, were told they would never allow such building to occur on such a small area of land, so close to natural heritage and natural hazards zoning.

“Knowing that zoning and bylaws were in place to protect this valley, we took comfort in our decision to purchase,” he said. “Now is the time for council to stand up and do its due diligence.”

The Pavia’s existing single-family dwelling is on a rectangular two-acre parcel of land on the north side of Hill Street, just west of Beamish Street. The site is already zoned for residential purposes in the CE Official Plan; however, changes are required to facilitate the intensification of development. The west boundary of the site runs along property that is designated as Natural Heritage land. The nearby ravine is zoned Natural Hazard land.

“I highly doubt that any of these houses, on premium wooded lots, are going to be affordable housing which is really what the provincial policy statement is about,” said Michelle Innes, who lives on Beamish. “I just think it’s really disrespectful to the 11 houses that surround these proposed townhouses. It does not fit in with the character of this particular part of the neighbourhood.”

Another Beamish homeowner, Perry Van Dongen, said the proposal doesn’t consider the impact on migratory birds and wildlife that rely on the woods for food and shelter.

Hill Street resident Kelly Horcoft added, “It’s way too aggressive for the area. We had just moved here in the spring. Certainly, if we had known it was going to be anything like this, we wouldn’t have moved here.

“Where does this stop,” asked Ms. Horcoft. “What stops a couple other units down the street from selling off and another 27 units going there?”

Tammy Cadeski is also a newcomer to the neighbourhood. The proposed development site borders the property on Beamish she bought one year ago. She fears the townhouse proposal is short sighted, considering there’s already a shortage of parks in the neighbourhood, and public transit is non-existent.

“Where would children play,” wondered Ms. Cadeski. “With that kind of density, especially in cities, you know that you’ve got public transit close by, so if people aren’t driving, you can hop on.

“We don’t have that in a small town,” she added. “You are reliant on vehicles to get from A to B. Coming from the (Greater Toronto Area) GTA, that kind of density does not make sense when you cannot access public transit. That’s one of the things that doesn’t fit with the area.”

Former CE Mayor Dave Marr, of High Street, raised several concerns. He doesn’t believe the proposal satisfies the Elgin County affordable housing policy. He also questioned whether a 2019 traffic study is still valid. Further, he noted that access to the site will need significant re-engineering given its location on a bend in the existing road, squeezed between the ravine and a neighbour’s driveway.

“I (also) don’t like the idea of two storeys,” added Mr. Marr. “It will be far more acceptable if it was a one storey development. This way you’re not going to have people with two storeys looking down into everyone’s backyard.”

Beamish resident Gary Curtis noted the entrance re-engineering would also be complicated by up to five different springs bubbling up in the vicinity. The municipality has struggled for years with drainage issues in the area that cause severe icing in winter months, he added.