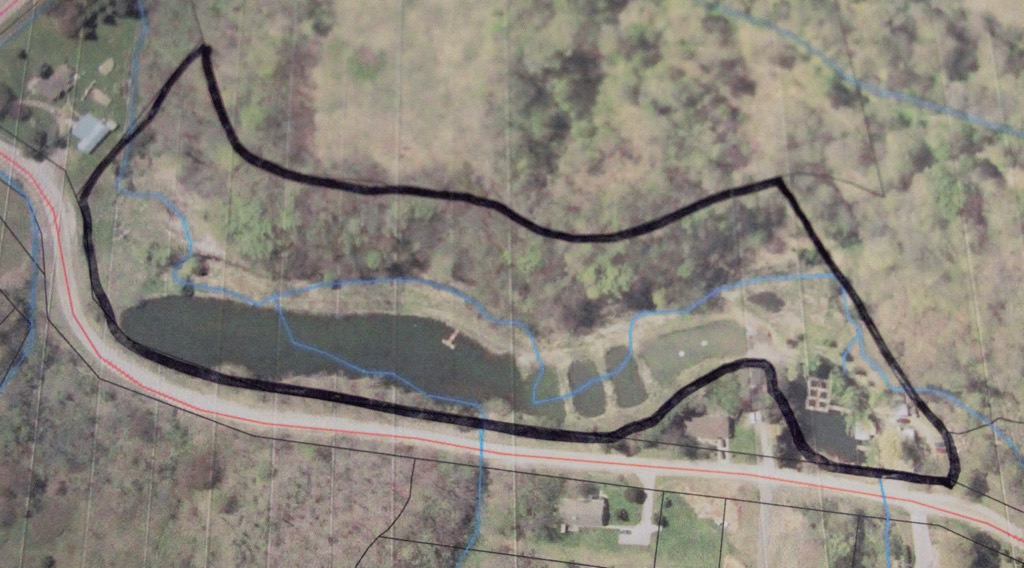 (March 2020) – C.J. ‘Kit’ Brown has turned a boy’s love of hooks, lines and sinkers into a man’s passion for community fish hatcheries and the environment.

“I’ve fished Lake Erie since I was about six years old,” said Brown, 80, a founding member of the Lake Erie Salmon and Trout Club (LESTC), and a director with Elgin Stewardship Council (ESC). “I’ve always been interested in nature, period.” 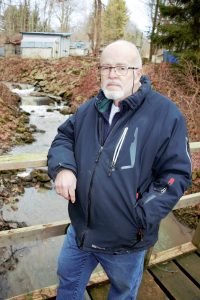 “We started this Salmon fishing contest, it made a lot of money and we needed to find something constructive to do with it,” said Brown. The anglers discovered a scenic nine-acre parcel of flood plain, at 4255 Thomas Road, just west of Union Road. That property – located in the old Village of Selborne, Southwold – was once the site of the Phoenix Mill, built in 1831 and sold in 1949 to C. Teskey Smith.

LESTC had 100 members at the time – only 20 remain today – and when they agreed to buy the lot, their focus turned to building a Salmon hatchery to help stock Lake Erie and support recreational anglers across Southwestern Ontario. The Ministry of Natural Resources and Forestry (MNRF), rejected the notion of a Salmon hatchery, so LESTC started farming Rainbow Trout instead.

About 1.27 million anglers go fishing in Ontario lakes and streams every year, contributing about $2.2 billion to the provincial economy annually. Behind the scenes, community hatcheries like the LESTC operation have collectively stocked over 235 million fish since 1982. Less than 50 community hatcheries remain in Ontario, with 70,000 volunteer hours a year to keep the sport – and the science – alive.

The LESTC hatchery, a registered not-for-profit corporation, is comprised of a series of six tanks. The tanks capture water from nearby springs and a natural aquifer, with about four gallons per minute flowing through the property, with a septic system for settling, before running out to Kettle Creek.

South Mill Creek winds through the club’s land, draining through a culvert under Union Road into Kettle Creek, just north of town. There’s also a garage on the lot, with a cement tank to raise minnows. From the hatchery to Kettle Creek, it’s actually a 36-foot drop and club members built some steps and pools up the creek, to accommodate spawning fish. Limestone was hauled in from Ingersoll.

In the spring, the fish swim up the creek to spawn, jumping and splashing. The Rainbow Trout run from mid-March to the second week of May, depending on water temperatures, but preferably about 52 degrees Fahrenheit.

Hatchery volunteer workers collect eggs from the stream. The MNRF also supplies “eyed eggs.” Between March to October, the young Rainbows grow to four or five inches in length. They remain in the pond until the following May, when they reach 10 to 11 inches in length. In two years, the Trout grow to 20 inches, when they’re ready for stocking.

LESTC herds about 100,000 Rainbow Trout a year into the club’s fish trailer and hauls them to fill fishing and game club orders for stocking at Erieau, Rondeau and Wheatley. “We’re feeding the recreational fishing industry,” said Brown.

Like cowboys after the cattle drive, Brown, Ron Casier – a retired science teacher, also of St. Thomas – and other LESTC members tend to the ranch, managing the forest and stream, trimming, digging and sweating.

LESTC maintains its property as a nature preserve, featuring 120 species of native Carolinian trees and shurbs, including the Paw Paw, with its native fruit, as well as Tulip, Coffee and Cucumber Trees. Many varieties of birds, including the Green Heron and King Fishers, inhabit the area.

The property is open to visitors 365 days a year. Tours may be arranged by contacting members. The park-like setting has come to be known as a community learning centre, frequented by many local schools. Bird and wildlife watchers bring their binoculars and cameras. Folks enjoy feeding the trout in the hatchery pond.

“All the conservation things that are popular these days, I’m into. It’s all for the better,” added Brown. “I’m into all this stuff. It keeps me busy.”