Port Stanley’s ‘fever hospital’ in the time of cholera 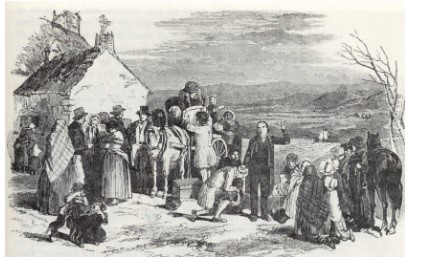 The coronavirus pandemic has not been fun for anyone, but perhaps we should be glad that we did not live in Port Stanley 189 years ago.

In 1832, a cholera plague was sweeping Europe and European immigrants were pouring into Canada. Conditions on the five-or-six-week voyage across the Atlantic can only be described as horrendous.

By law, passengers in steerage, the cheapest form of accommodation, had to be allotted 1.1 square meters of space, and even this was often ignored. The cholera bacteria is spread by lack of sanitation and clean water. It results in vomiting and diarrhea, often progressing, if untreated, to death from dehydration or renal failure. Under the conditions of the transatlantic passage, it would have spread like wildfire.

Infected ships were required to fly a yellow flag, and passengers who were thought to be infected were incarcerated in quarantine sheds erected on Grosse Isle, just down river from Quebec City.

It is said that in Quebec City and Montreal, schools and shops were closed and the only booming businesses were the ones producing the boards needed for coffins. The epidemic subsided in 1833, but recurred in 1834. By the time the epidemic was over, Cholera had killed 4,000 people in Montreal, 15 per cent of the population.

Not all cholera victims were intercepted before they reached Ontario. Perhaps some infected immigrants made it as far as Port Stanley, where a fever hospital awaited them on the Hillcrest bluff overlooking Lake Erie.

Port Stanley’s hospital had been built in 1832 at a cost of 50 pounds. John Bostwick was the Port Stanley Harbour Master at the time, and as such he no doubt would have played a role in making sure that the new immigrants to Southwestern Ontario were properly looked after. The hospital building was 40 feet long, 20 feet wide and even boasted windows and windowpanes.

Its equipment consisted of one iron bed, one dozen bottles, seven glass jars, two stone jugs, two shillings worth of soap, candles, one shirt and one sheet. The hospital was staffed by Doctors Bowman and Goodhue, assisted by a nurse, Ira Whitcombe, and her assistant Lemuel White. Agnes Hepburn in her wonderful Historical Sketch of the Village of Port Stanley reports that Ira bought some brandy, probably, she writes, to keep up the spirits of the staff.

On the other hand, brandy mixed with opium was one of the treatments which has been recorded as being used to treat this dreaded disease. We do not know how long the “Fever Hospital” in Port Stanley existed, or even exactly where it was located. It is not shown on any early maps, and it would be reasonable to speculate that it was on land which has now been eroded away.