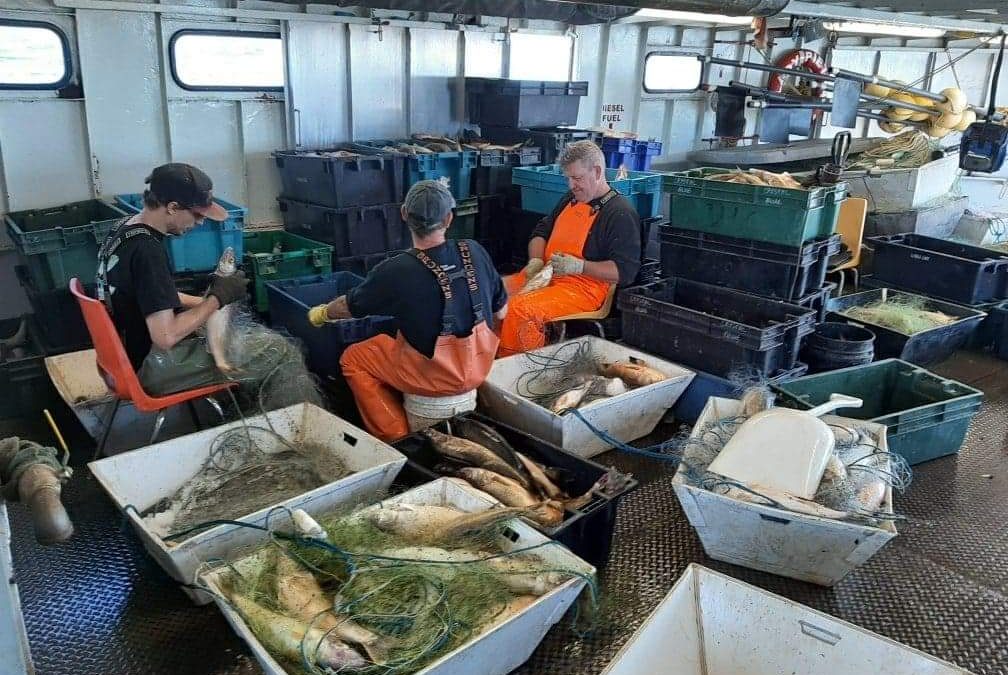 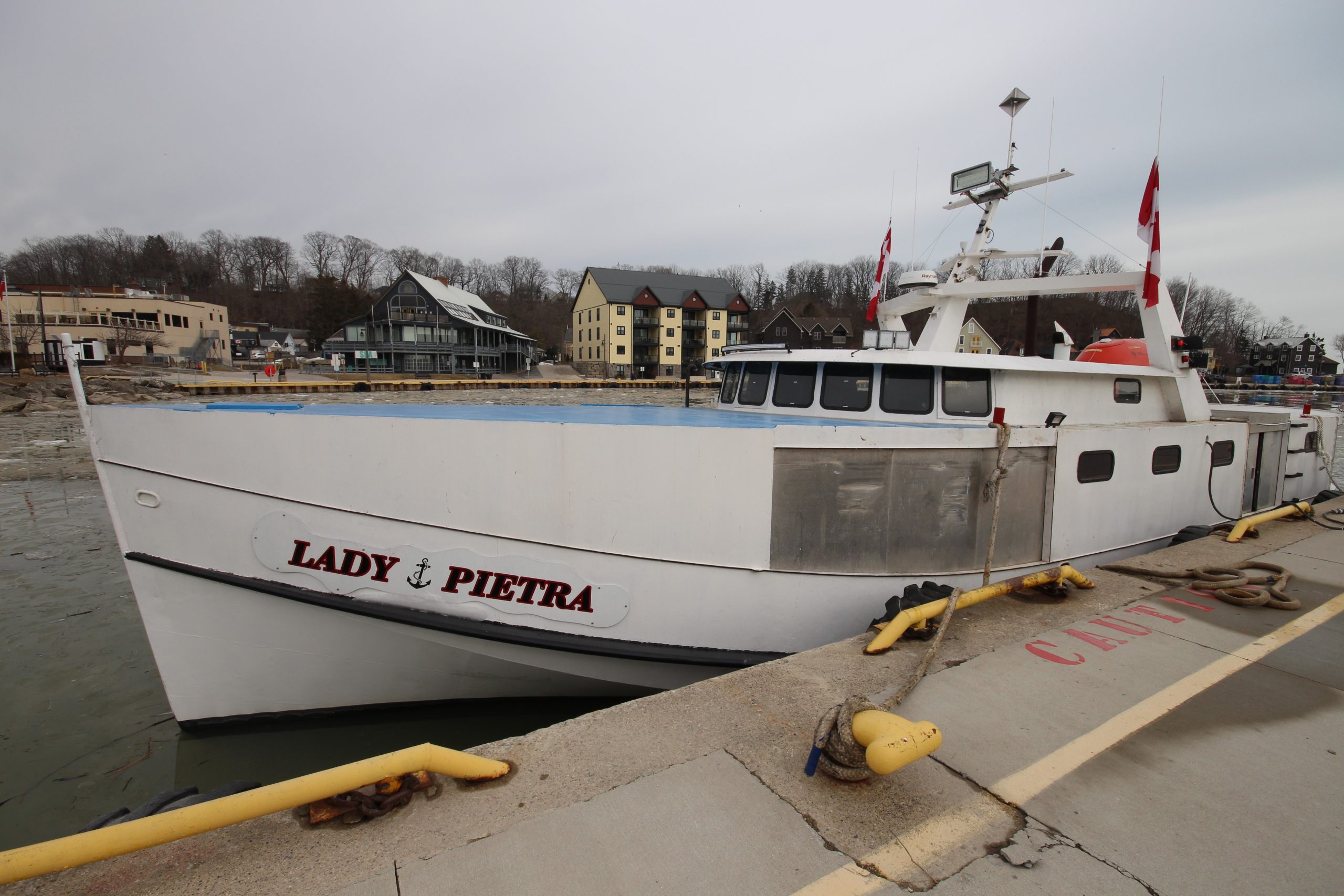 “She has returned to full duty,” said Sarah Burwell-Cook, skipper Shawn Cook’s partner. Lady Pietra’s first fishing run of the season was last Friday, and she was out again earlier today. Cook’s crew includes Frank Burtch, Andy Sheeller, Dave Budway and Curtis Griffin. “She returns with a completely refinished wheelhouse, as well as several other repairs and upgrades.”

The fish tug has been out of commission since August 22, 2020 when witnesses saw a man jump aboard Lady Pietra and ignite a fire in the wheelhouse, before sprinting away. She was moored just south of the lift bridge, on the west bank of Kettle Creek.

The boat was fully engulfed in flames when Central Elgin Fire and Emergency Services arrived. No injuries were reported. The Elgin Detachment of the Ontario Provincial Police (OPP) arrested a man a short distance from the scene, charging him with arson. The Office of the Ontario Fire Marshal (OFM) investigated. Damage caused was about $300,000 .

Cook and his crew retrieved their nets the next day with the help of Derek and Grant Weaver, of Port Stanley’s Weaver Fish Company.

“A message for the arsonist,” added Burwell-Cook, “we want to be careful with wording, as we want no return visits … but to say the least, he has created a lot of havoc for the owners, captain, and crew.”

The 65-foot Lady Pietra was built by Tug Weld Manufacturing Ltd., of Leamington, in 1987. Formerly known as the Crystal Blue I, the boat is currently owned by Tory Caradonna, Frank Rubino and John Peralta. Previously, she was owned by Murray and Rick Collard, of Leamington, from 1987 to 2017, and by Ken Goodison, of Blenheim, from 2017 to 2020.

Caradona and company purchased Lady Pietra in March 2020 to replace the damaged Liddle Lady V which had her own day in the spotlight back in March 2020. Metal fatigue around the rudder is believed to have opened a crack in the hull of Liddle Lady V and she nearly sank 12 miles from shore.

Sirens wailed and emergency vehicles converged on the west pier when Derek Weaver and the crew of Cosley Bros responded to distress calls, tied on to the Liddle Lady V and towed her back safely to Port Stanley.

Officials did not immediately respond to North Shore Beacon’s inquiries about the identity or sentencing for the arsonist. However other media accounts show that a man with the same name was also charged with torching a Central Elgin trailer later in 2020. 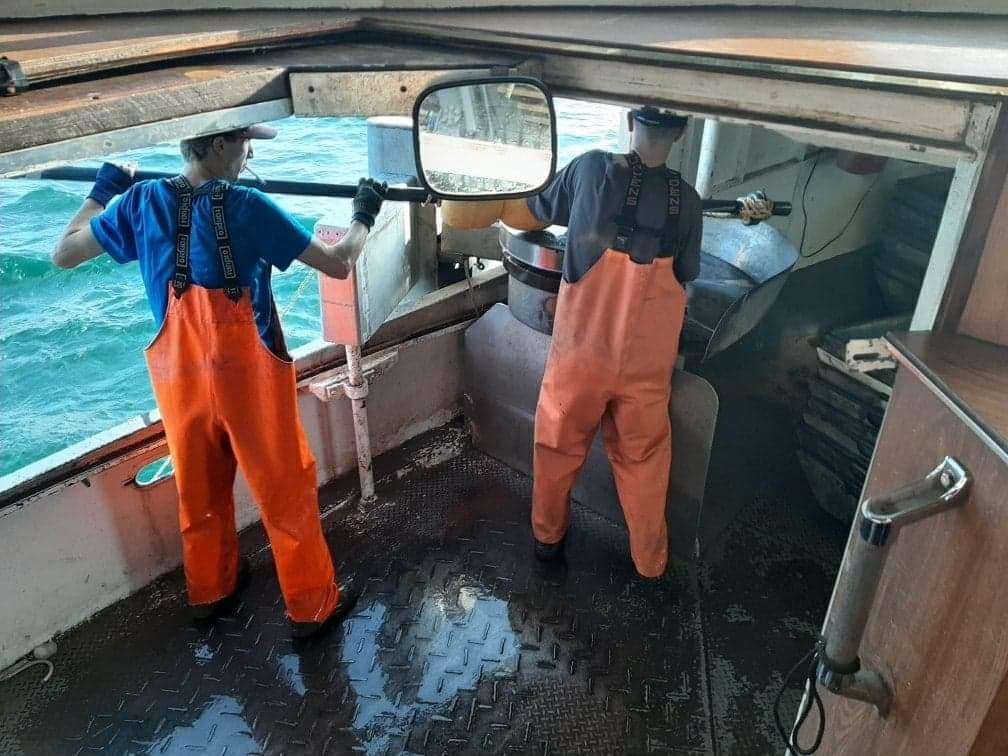