Port Stanley’s May 8, 1945 celebration of Victory in Europe Day 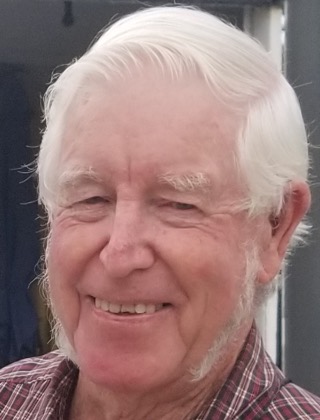 The VE-Day parade is pictured from the south side of the bridge. The building in the background was Young’s Restaurant which was two stories at that time. Fire Chief Mac McIntyre, left, is seen talking to Howard Berry. The fourth vehicle in the parade was Blake Berry’s truck.

It was a day like no other. Seventy-five years after the most important day in the entire 20th century, what memories are engraved in the mind of someone who was a child of seven on that eventual day? What images persist after the passing of a lifetime? 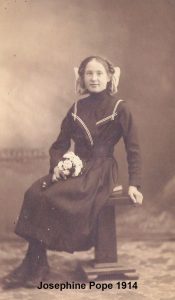 Smoke and sirens. Josie Pope. She provided the most vivid memory of that long-ago day. The fire hall played an important role in the celebration of the end of the war in Europe. At that time, the Fire Hall was a small garage attached to the west side of the Town Hall, in the present-day foyer of the library.

At that time, there was a switch beside the front door of the fire hall, which activated the alarm on the roof of the Town Hall, a siren that could be heard throughout the village. It was an over-powering sound that struck fear in the hearts of everyone for it invariably warned of disaster of one kind or another.

Josephine Pope had good reason to celebrate the end of the Second World War on May 8, 1945. She was at the centre of a small drama that played out on that day at the fire hall.] 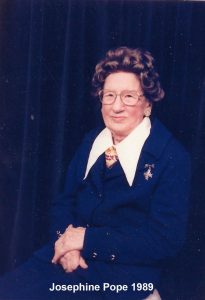 Josephine Pope took possession of that switch on the afternoon of VE Day and for nearly an hour the sound of that siren echoed up and down the valley. The town police officer attempted to stop her. A crowd of several hundred people had congregated on Bridge Street. They shouted their disapproval as the policeman approached her.

“Leave her alone,” the crowd shouted. Even a seven-year-old child could sense the displeasure of the crowd.

Wisely, the policeman withdrew, and the siren continued its mournful alarm. Eventually, two senior students from the public school, Jack Prothero and Bruce Hill, approached Josephine, each one gently grasping her elbows. Quietly, they backed away and the undulating moan of the siren ceased. Or did it? Perhaps it never has. Seventy-five years later, it echoes in the memory – a melancholy reminder that the joy of victory was not without its price.

And the smoke? A pall of smoke lingered over the downtown of the village through much of the afternoon. One might have wished for fireworks on a day such as this, but the celebration was too sudden, too spontaneous for such arrangements. But the students of the Port Stanley Public School were prepared. That is Shirley Gifford and a few of her friends were. They had fashioned a life-size effigy of Hitler which they erected in front of Young’s Restaurant (yes, the restaurant is still there) and they proceeded to light their effigy on fire. The blaze was cheered by everyone present but the combustion was somehow incomplete, and the smoke lingered in the downtown area for the rest of the afternoon. The smoke added the second most memorable feature of that day.

The children had been excused from school that day and they were another outstanding impression of VE Day. Do not think that those children, including myself, a child of seven, could not grasp the importance of what was taking place. We had been raised on war. It was our daily bread. Our parents and relatives were all involved in one way or another. The government of Canada had even recruited its most junior citizens to be part of the war effort. Every Friday, at school, we were expected to produce five cents to support the war effort. Each nickel earned a stamp. Two lucky students were chosen to go to the bank and buy the savings stamps which were kept in books, one for each recruit, to be redeemed at the end of the war.

We knew the lexicography as well as our parents did: D-Day, Spitfires and Lancasters, the Bismarck, Battle of the Atlantic, U-Boats, Stalingrad, Pearl Harbour. At breakfast, we studied the silhouettes of fighter planes printed on the cereal boxes. We were no strangers to the conflict. 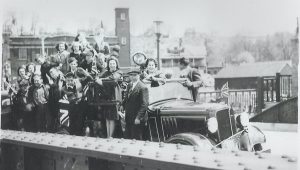 The VE-Day parade is pictured from the south side of the bridge. The building in the background was Young’s Restaurant which was two stories at that time. Fire Chief Mac McIntyre, left, is seen talking to Howard Berry. The fourth vehicle in the parade was Blake Berry’s truck.

A makeshift parade had been organized that day consisting of a few cars, Blake Berry’s truck and the fire engine. School children were allowed to ride on the fire truck as it made its way through the village streets. That was an incomparable delight, a privilege and an adventure beyond belief.

And there we were:

… and so the list went on. Most of the students in the village were there. In the following days, months and years they would be the leaders of the village. Many of them would leave Port Stanley to find their fortunes in other parts of Canada and abroad. They would not forget the village of their youth nor that special day in May 1945.

The mixed emotions of that day were evident in the faces of the adults in the crowd on Bridge Street – pride in the fact that we had won and that Canada had played an important part in that victory, relief that the six long years of war were over and that those who had served would soon be coming home; sorrow for six Port Stanley boys who would never return … and a certain haunting fear that we had passed from one era to another with no assurance that we would not face greater horrors in the future, but … of course we had won the war and that was all that really mattered.

The celebrations in New York, London and Paris were certainly more extensive than those in our village. We saw the huge crowds in the pictures in the newspaper and the news reels at the movie theatre, but nowhere did I see that the children in those cities had been paraded through the community in a fire truck. It was left to the children of Port Stanley to treasure that memory for another 75 years.

Frank Prothero is a retired history teacher. With his wife, Nancy, as co-author, he has published 21 books on Great Lakes, regional and local history. Their seven children were raised in Port Stanley.