Summer for Port Stanley means one thing, hordes of summer visitors, and so it has been for the last 100 years. 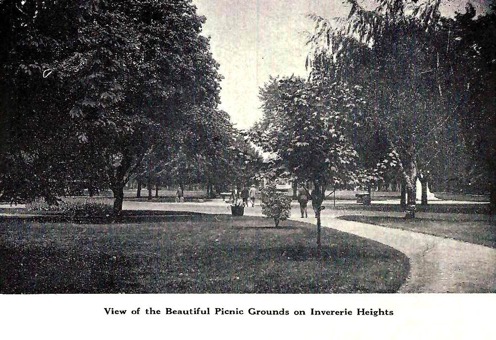 In August of 1934, 86 years ago, the London and Port Stanley Railway Employees Benefit Association printed a program for Port Stanley’s second annual Booster Day. It is unclear if this was a booster day for Port Stanley or for the beloved L&PS, but in those days the two were so closely intertwined that it doesn’t really matter. In summer, hourly passenger trains linked Port Stanley to London and St. Thomas.

At a recent meeting of Heritage Port Stanley, we discussed in detail the 82-page brochure published to mark the 1934 Booster Day. The brochure says, “Port Stanley as a summer resort is unrivaled in the diversity of its appeal to those who relish rest and entertainment. It has that something which appeals to both young and old, for it possesses quiet restful spots where one can relax, and the bright lights where those who like to promenade and dance can indulge themselves to their hearts desire. It has perhaps the finest alluring bathing beach on the Canadian shore of Lake Erie and is a place where romance abounds under the cool canopy of evening. For those who desire a real good time it is strongly recommended.”

Could we still say this? It is something to think about as we consider plans for the future of Port Stanley. 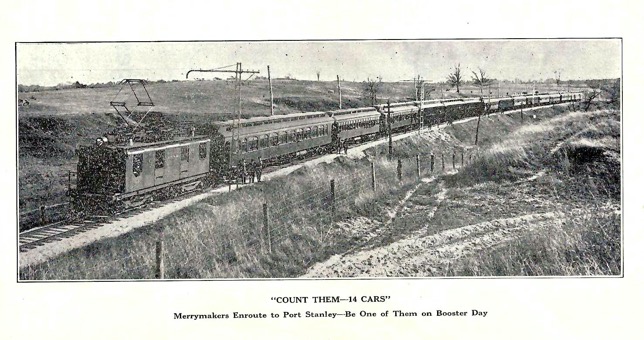 The brochure contains several truly awful jokes and advertisements for local businesses such as Burkes Hardware. In another advertisement W. Heman and Son of London advertise Blue Coal whose, “Reputation for positive satisfaction is far reaching. It satisfies customers because of its even, uniform heat and because it is long burning. Again we say it is still the favourite in Canadian homes just as it has been for 50 years, because no finer anthracite has ever been brought above ground”.

Many of us still remember the huge piles of coal, mostly from the coal fields of Ohio and Pennsylvania which lined both sides of the harbour, even if we did not appreciate its stellar qualities.

Most of this coal was taken north to St. Thomas and London by the L&PS. A highlight of the Booster Day in 1934 was the sports program on Mariner’s Bluff (then known as Invererie Heights). The girl’s race, five years old and under, offered prizes for all. The Pillow Fight on Pole had two prizes. as did the Boxing in Barrels. Some of our readers might have wished to enter the Elderly Ladies Mystery race. Or maybe not. Our Heritage Port Stanley members tell me that the Ladies Clothes Pin race would have been won by the person who could put clothes pins on a line the most quickly.

The brochure includes a brief history of Port Stanley, written by E.N. Lewis. It tells us that, “On April 10th, 1670, at the mouth of the River Tonti (now known as Kettle Creek) was found Joliet’s canoe, lost in a storm between this point and Port Dover, while in 1721 Charlevoix, making his way up the chain of lakes, declared that this part of the country had the most beautiful scenery viewed on this trip.” Lewis says that in 1824 this harbor was visited by three young men, all members of Parliament in England, one of whom was Lord Stanley, later known as the Earl of Derby, as he succeeded to the family title and estates, becoming a prominent figure in the political life of the Mother Country.

These young men were evidently sent to Canada to gather facts regarding this part of the world. They were guests of Colonel Talbot, so it would seem clear, Lewis says, that Port Stanley was named after Lord Stanley, as no records bear that name prior to this visit, and it was so designated shortly after 1824.

How about the jokes? “Are you a doctor?”, she said, addressing the soda jerk. “No
Mam”, he replied, “Just a plain fizz-ician.”

This brochure was brought to my attention by David Harding, a past chair of Heritage Port Stanley, who has had a life-long interest in the London and Port Stanley Railway. It was published in 1934 by the Hayden Press Ltd., in London. Heritage Port Stanley meetings are usually held on the fourth Thursday of every month at 1:30 p.m. in
Port Stanley’s Festival Theatre building.