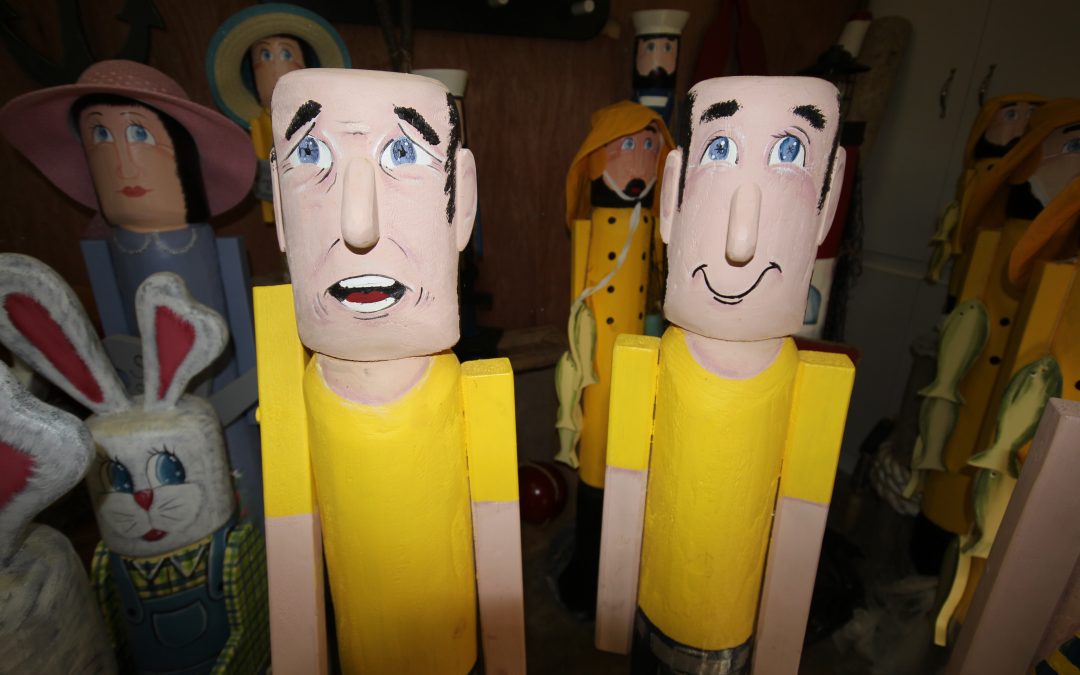 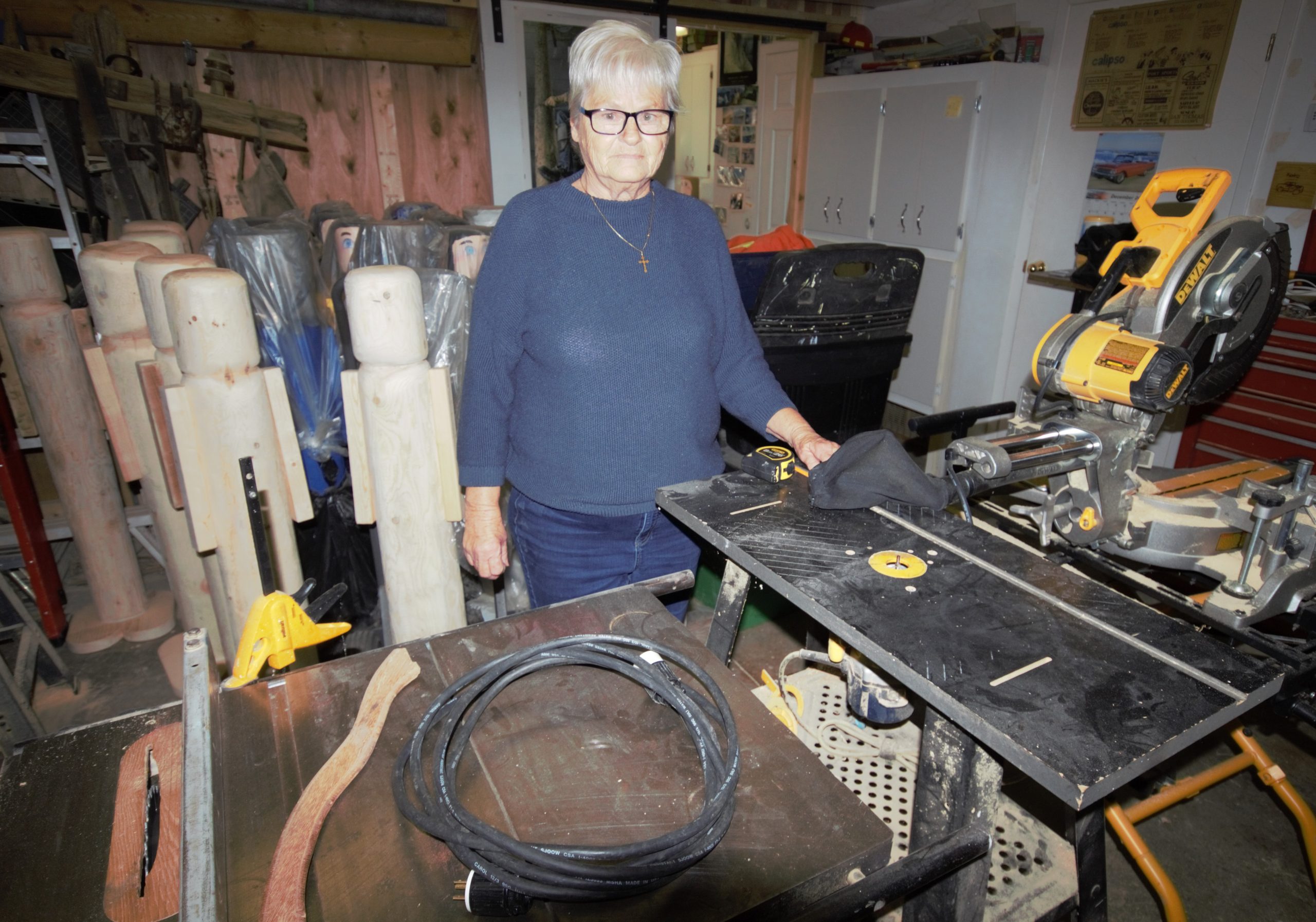 Cathy Cook never imagined her chance purchase of a novelty item more than two decades ago would turn into an “out of control” hobby that gave rise to a wildly popular collectable which is now a cornerstone of Port Stanley’s beautification program.

“It started (in 1995) when I bought one at a craft show,” Cook said in a recent interview, recalling her introduction to ‘post people’. Her youngest child, Dave Cook, was at a hockey tournament near Kingsville, and she was poking around in the shops, looking for a gift for her father-in-law. “It didn’t have a face on it. It was just a rustic post with a sou’wester on it. I knew I could do better.

“It just went from there,” Cook continued. “My sister wanted one. Then someone else wanted a sailor, then a scuba diver. People started putting them on their porch. It got to be a hobby out of control.” Her passion became a business in 1999. 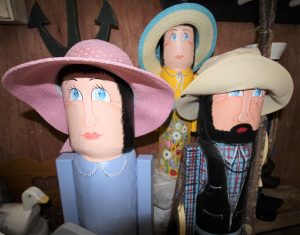 Dustin Allen, proprietor at Ports Pets, and Chairman of the BIA, said the post people are intended to beautify the village, while promoting tourism and telling the story of the village to visitors and tourists. It’s hoped that every store in Port Stanley will someday purchase a post person and complement the campaign.

There’s already a colorful collection of old and new post people around the village including: a post-hockey-player by the Port Stanley Arena and Community Centre; a post-gardener on Colborne Street, beside the C.A. Bell Medical Centre, commemorating the Port Stanley Volunteer Gardeners; a post-firefighter at the Fire Hall Market; a post-pharmacist outside the I.D.A. – Highland Drug Mart; and a post-engineer at the Port Stanley Terminal Rail station. 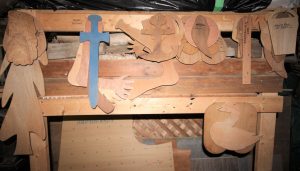 Cook also recently gave a facelift to the post-OPP officer on Bridge Street, long rumored to be enamored with the post-dentist across the street, in front of Port Stanley Dentistry. There’s a multi-racial post-family of three by the Port Stanley Visitor’s Centre. Cook created a same-sex, post-couple, strolling by the PRIDE crosswalk on William Street: two men in tank tops, each with a half rainbow on the front of their shirts, completed when they stand side by side.

“I don’t call myself an artist, I’m just creative,” said Cook. “I’ve never had lessons or anything. I taught myself, and it was fun. I’ve always liked crafts.

“Let’s just say we could probably make more money working at Tim Horton’s,” she added. “It’s a labour of love.” 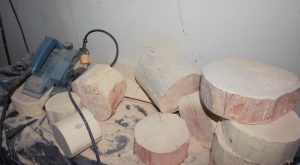 Cook spends about 25 hours a week creating post people. Her husband grinds, sands and polishes the raw, six-foot cedar poles, adding wooden arms and a wood platform for ‘legs’. She paints them. Cook has painted more than 1,000 in her lifetime, including a batch purchased by the BIA in the early 2000s. Some were sold to village visitors from as far away as England, California and Florida. Cook has painted about 50 in the last several months and she’s taking orders now for Christmas.

“I think people like them because they are unique and custom post orders have a personal meaning to each person,” she said. The family of Nick Cheeseman – who was killed in Central Elgin in a motorcycle accident on July 28, 2022 – commissioned a post person in remembrance of the St. Thomas firefighter. Port Stanley resident Don Bell acknowledged his son’s surfing passion with a post-surfer, with “ride the waves” on his hat, to be installed soon on Little Beach.

“It is fun creating characters and rewarding when others enjoy them,” said Cook. She sells post people for $125 each. “I just freehand them. They’re just ideas I come up with. I’ll just light a candle, put some music on, and just paint.

Cook retired last year after 42 years at Extendicare Port Stanley, and “I thought this was something Mike and I could do in our retirement. I’ve always been Mike Cook’s wife and now I’m the post woman.” A retired utilities worker, Mike was born and raised in Port Stanley.

She operated a store called Harbour Lights for one year in the early 2000s, selling scented candles and votives on Colborne Street. She closed the store and took a break from painting post people in 2002 for medical reasons. After three years, she picked it up again. “In my heart, I just wasn’t done and people kept asking about it.” 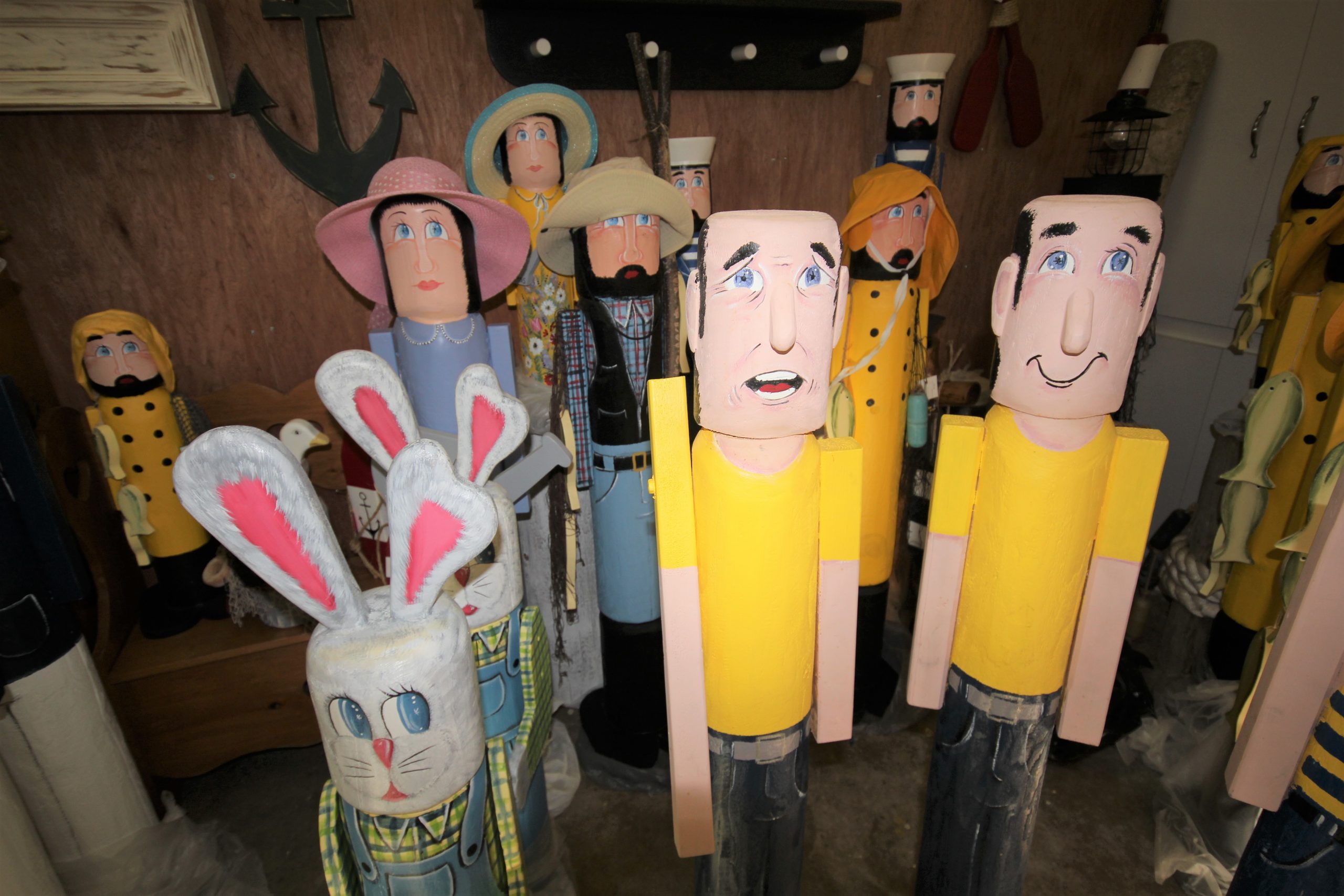