By Craig Cole  (October 2019) – The nobly named King George VI lift bridge is pretty much taken for granted by many of us. That may end in March, when the bridge is slated to be closed for 14 months, for general refurbishing, repainting, new motors and hopefully new lighting fixtures which will be in keeping with the original fixtures.

One of the features of our monthly Heritage Port Stanley meetings is a discussion of what was going on in Port Stanley 100 years ago. In 1919 a large delegation traveled to Ottawa to talk to the Minister of Public Works to try and persuade the federal government to improve the harbor and build a new bridge which would open to allow access to the inner harbor. The channel between the two piers in the outer harbor was very narrow, and the twin truss steel bridge on Bridge Street was in need of repairs, having been built in 1894. It was claimed by the delegation that the sinking of the Bessemer 10 years previously had resulted from the very narrow channel which prevented the Bessemer from making it into the Port Stanley harbor on that fateful night in 1909 when the Bessemer sank. 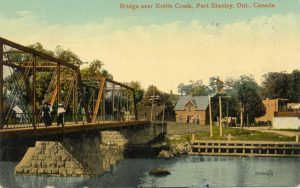 The federal government pleaded lack of funds and replacement of the 1894 bridge would have to wait another 18 years until 1939. The premier of Ontario at the time, Mitchell Hepburn, a Port Stanley boy, has received a lot of the credit for this ambitious undertaking. The beautifully counterbalanced steel lift bridge which resulted, and which is now slated for refurbishment, is known as a bascule bridge. The two spans of the bridge are raised by two electric motors, not much bigger than shoe boxes. In an emergency the bridge can even be operated by a hand crank. One of the aspects of the plan for refurbishing the bridge calls for replacement of these two original motors, and the addition of two more motors.  In 1939, as is the case now, the deck of the bridge was covered with a new type of steel mesh flooring, designed to prevent the accumulation of snow and ice in the winter. At the time that it was built, the King George VI lift bridge was considered to be a model of modern engineering.

The building of our present bridge was not without tragedy. A coffer dam had been built to allow the construction of the cement pillars which would support the bridge. On the evening of December 19, 1937 13 men were working inside the coffer dam, 29 feet below the surface of Kettle Creek. According to a contemporary newspaper account they were all new on the job, having been hired in the previous three or four days to speed up construction. It was just after 9 p.m. on a Sunday, and the first indication that something might be wrong was, to quote the St. Thomas Times Journal account, “a thunderous roar that sounded like nothing more than the crashing of a hundred trees at once. It was an awful sound, full of ominous import and it took no time to realize that something had happened”.  The coffer dam had collapsed, and the 13 construction workers found themselves surrounded by swirling water, chunks of ice and broken wood. Five of them were eventually rescued, but eight lost their lives, making this the worst Port Stanley disaster since the sinking of the Bessemer 18 years before.

The coffer dam collapse resulted in a temporary cessation of work on the bridge, but the new bridge was finally completed and formally opened on May 15, 1939. It was named in honor of King George VI who was on a royal tour of Canada following his coronation two years previously. At the opening ceremonies, T.B. McQuestin, the head of the Ontario Department of Highways, spoke at length about the possibilities for development of the inner harbor which had been made possible by the lift bridge, and envisioned the day when villages like Port Stanley  would be “busy cities, strategic points in a great industrial and transportation system”. Other speakers talked about the day when ocean liners would be sailing under the new lift bridge. 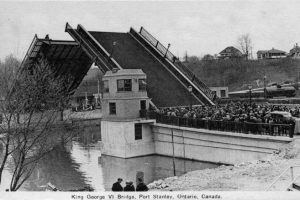 In the very early years of Port Stanley’s existence, the only way that people could cross from one side of the harbor to the other was by rowboat, and  early settlers on the west side of Kettle Creek wrote about the concern that they felt for their loved ones who had to row across the creek late at night. If the little village of Port Stanley was going to develop on both sides of Kettle Creek, it would be necessary to build a bridge, and an 1843 map of Port Stanley shows a bridge at roughly the same location as our present bridge. It was designed as a swing bridge which could be rotated to allow the passage of boats into the inner harbor, but apparently it was only “swung” once. This bridge was replaced two or three times over the next 50 years by wooden bridges and steel bridges. Historical references differ as to the dates of construction of these various bridges, but it appears that our present lift bridge was the first bridge which opened on a regular schedule. In 1975 it was raised 5,031 times and gained continent-wide fame several years ago when it starred in a Superbowl commercial for Bardhal motor oil which showed a car which used Bardhal motor oil jumping the gap between the two rising spans.

The time has come for the bridge to be once again refurbished and it sounds as if all of us in Port Stanley will have to adjust to Bridge Street being closed. The plans call for one span of the bridge to be lifted periodically to allow marine access to the inner harbor, so we will have to accept the fact that our venerable old bridge may start feeling a bit stuck up. Maybe someone could organize a passenger ferry service.

As a postscript, I must confess to a certain affection for the King George VI lift bridge, since it was opened in same year that I was born. I could probably benefit from a couple of new motors myself.