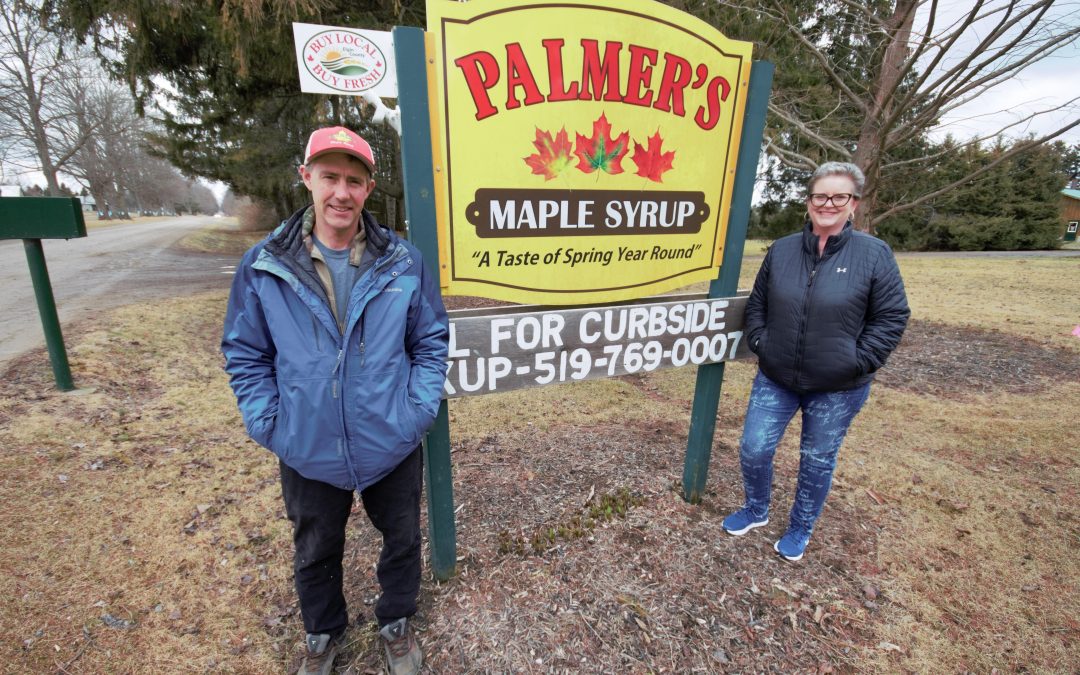 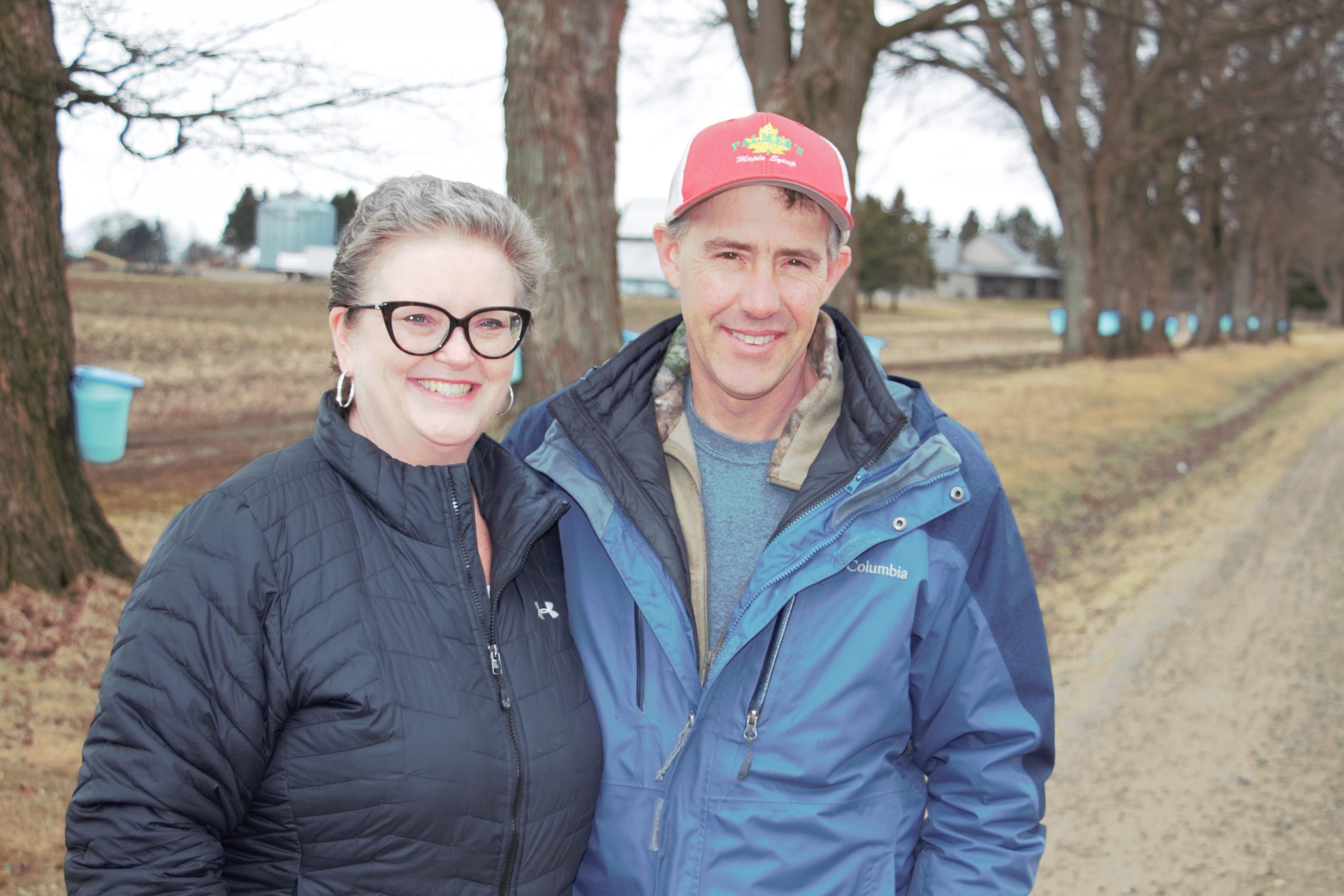 Silence in the Syrup Shanty these days betrays the actual performance of the Palmer’s Maple Syrup operation in Southwold, west of Port Stanley.

Business has actually been steady as the third-generation syrup makers satisfy demands for nature’s liquid gold, riding high on the pandemic’s revival of ‘buy-local’ sentiments.

“Sales have been steady, for sure,” Laura Palmer said in a recent interview. “People are searching out the small businesses to find maple syrup.

“People were doing it before too, but they are coming to the farm more and more,” she added. “The pandemic really fortified that.”

Instead of the buzz from upwards of 80 people a day, chowing down on pancakes, waffles and maple-baked ham, the atmosphere is far more subdued.

The Palmers are not running tours of their picturesque farm, or fascinating families with tales of the history and evolution of the maple syrup harvest.

They’re busy fulfilling ‘curbside’ cash and carry sales, while also keeping up with commercial orders from retails outlets like Briwood Farm Market, in St. Thomas, the Port Stanley Foodland, and The Turkey Shoppe, in Talbotville. 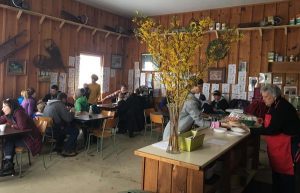 “The Syrup Shanty is a tradition for most families,” said Brian Palmer. “It goes until their kids get older, then they start to bring their grandchildren.

“We use to serve pancakes out of the garage,” Palmer recalled. The Syrup Shanty first opened in 1999 as part of the family’s commitment to Ontario’s agri-tourism industry. They hope to invite the public back to the shanty next season.

The Palmer’s farm expanded to 6,000 taps from 1,500 taps in 1999, while also moving from bucket collection to vacuum hoses to enhance yield. The family farm includes a 10-acre woodlot that’s tapped for maple syrup. The balance of the property is rented to other farmers, who grow mostly corn and soybeans. Palmer also rents a 15-acre woodlot from his mother for syrup production, as well as a 35-acre woodlot nearby.

Palmer’s Maple Syrup is the largest maple syrup operation in Elgin County. The family harvests one-and-a-half litres per tap every year, all bottled in the now familiar beige plastic jugs, with the catchy red leaf labeling. “It’s my main source of income,” he said.

Canada is the world’s leading producer and exporter of maple products, with about 11,468 maple farms and 47 million taps, generating about 75 per cent of the world’s syrup supply, according to the Canadian Encyclopedia.

Canadian syrup makers exported more than 61 million kilograms (kg) of maple products worth $525 million in 2020. Quebec produces 96.4 per cent of Canadian product exports. The U.S. is Canada’s best customer, consuming 59.1 per cent of total exports in 2020. Other buyers include Germany, Japan, the United Kingdom, Australia and France.

The Palmers have also sold a lot of maple syrup at the Horton Farmers’ Market, in St Thomas, through the years. “I went with my father as a kid and then when the market was closed for a while (in the ‘80s), we started wholesaling the syrup at local stores.” Palmer remembers having a binder full of syrup orders.

“It used to be that everybody got all their syrup in the spring, but now we sell it all year round,” he said. “Really, we sold mostly to old railroad guys in St. Thomas. Then all of a sudden, it just quit. They all died.

“We mostly do family gate sales and wholesale now,” said Palmer. The business is not yet equipped to manage online sales. “I should be, but I’m not a techie. It’s something I’ll do in the future. You always look for new markets.”

The syrup is flowing well this year. Ideally, Palmer’s maple forest is at its best with minus four degrees Celsius nights, and plus 4 degrees Celsius days. Harvest stretches over 20 days on average. Generally, he taps the trees on Valentine’s Day, drilling a new hole every year, and finishes at the end of March.

“It varies, but it’s been pretty consistent through the years,” said Palmer. “When I was a kid, it was different, but there were different weather conditions then. 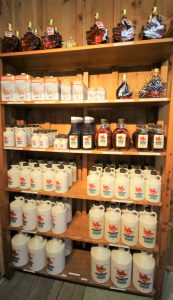 Agri‐tourism is a sub-set of rural tourism that specifically supports agricultural production. It can be an effective diversification option for farmers.

There is little public information on the size and reach of Ontario’s agri-tourism industry, however, many agri-tourism operations thrive within a two-hour drive of urban centres like Toronto and Ottawa. Urban life provides development grounds for consumers who want to experience authentic outdoor farm activities.

“Elgin County Tourism recognizes and promotes the strong agri-tourism businesses and experiences here in Elgin County,” said Brian Lima, Elgin County’s General Manager of Engineering, Planning and Enterprise. “From Bluegroves Farm, in West Elgin, to Wildflowers Farm, in Central Elgin, and Clovermead, in Aylmer, promoting farm visits is integral in what we do.

“Our department focuses on developing this sector through various channels such as our Maple Syrup Trail, Savour Elgin program, Buy Local Buy Fresh, Fall for Elgin campaign, and a dedicated agri-tourism presence on our website and Visitors Guide,” added Lima, who also serves as Deputy Chief Administrative Officer.

Lima shared a September 2021 report by the Food Retail Environment Study for Health and Economic Resiliency (FRESHER) that outlines the struggles of food retail businesses – including farmers’ markets – and their resiliency during the pandemic. The report was prepared by the Human Environments Analysis Laboratory (HEAL) at Western University in partnership with the Elgin Middlesex Oxford Workforce Planning and Development Board.

The study found that despite “the documented hardships during the pandemic, participants demonstrated clear evidence of resiliency, at both business and personal levels.

“Many food retail and food hospitality businesses took advantage of available technology, building their online infrastructure and adapting products to reach personal consumers online,” the report continues. “Community and government programs offered relief for many owners and seem to have alleviated some financial uncertainty for businesses and individuals. Communities also found unique ways to push the ‘buy local’ mentality and feelings of solidarity were high, especially in the early months.”