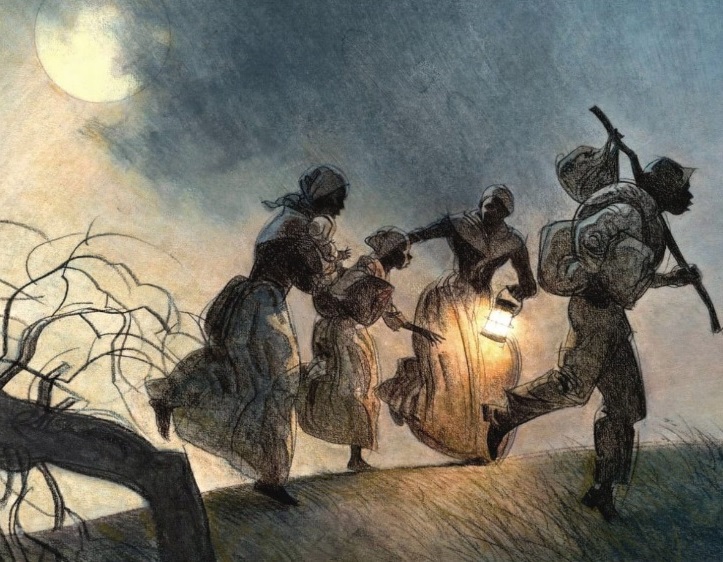 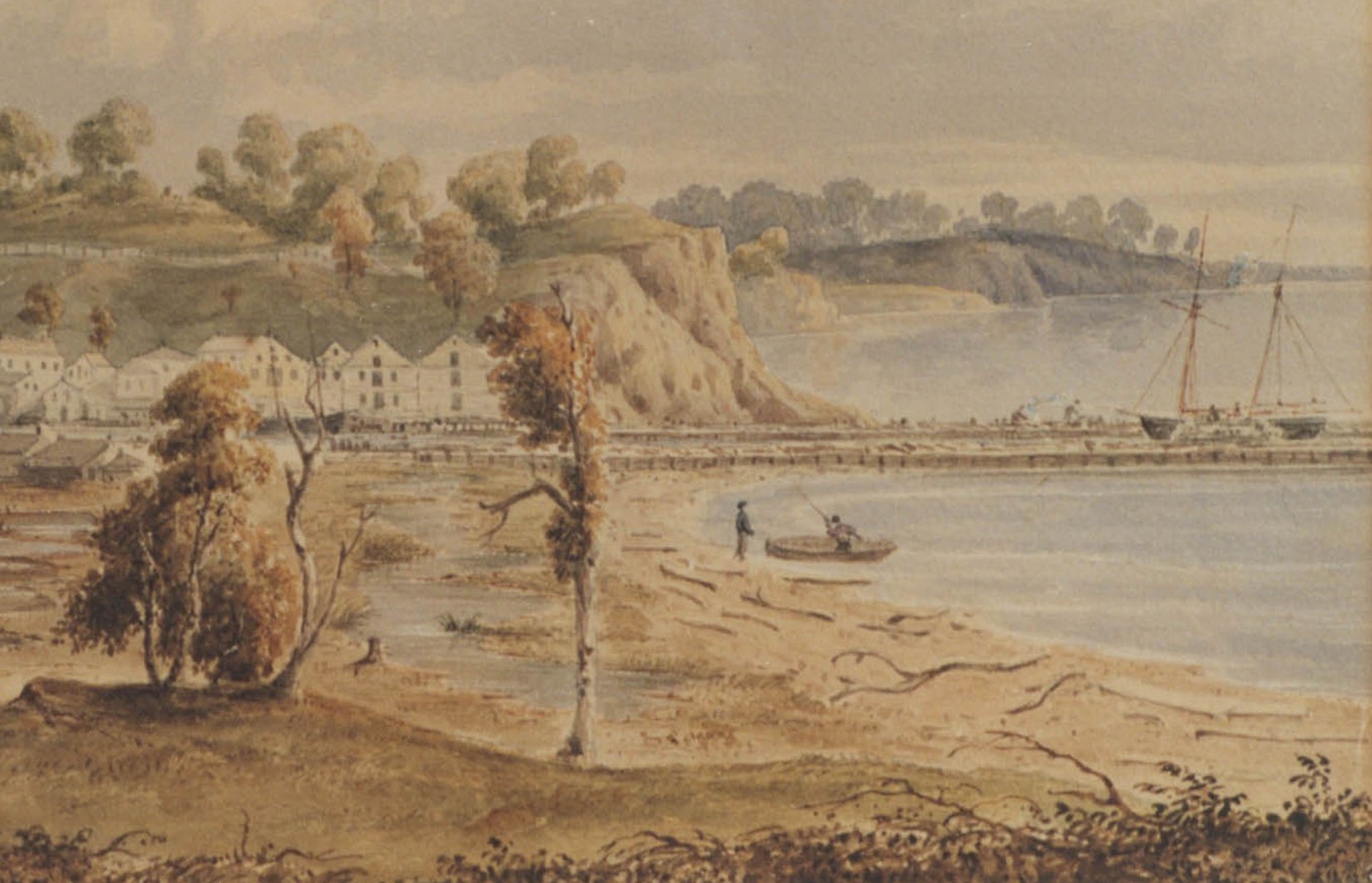 Photograph (above) courtesy of Mike Baker, Curator, at Elgin County Museum. The Museum is currently developing a virtual tour of Black history and this Airey painting represents the UGRR era, about 1850. Other photos (at top and below) provided by Heritage Central Elgin.

Many people have heard about the Underground Railroad which helped so many American slaves escape to freedom in Canada, but few people know about the role which Port Stanley played in this network. Heritage Port Stanley, the local historical society, is preparing an information sign which will be placed near the tourist office.

In the first part of the 1800s, prior to the American civil war, slavery was well established in the American South. Slaves were valuable property. Every effort possible was made to capture an escaped slave. Most of the slaves who escaped, or ran away, headed north.

A Slavery Abolition Act had been passed by the British Parliament in 1834 which made slavery illegal in their colonies in North America. In the U.S., many northern states were opposed to slavery, but the Fugitive Slave Act, passed by the U.S. Congress in 1793 required that all escaped slaves, upon capture should be returned to their owner. Once an escaped slave reached the border of Upper Canada he would be safe. In 1850, the U.S. government strengthened the Fugitive Slave Act leading to a marked increase in the Black people immigrating to Canada, especially to areas around Chatham and Windsor.

A network of slave abolitionists formed in the northern states to help the escaped slaves reach sanctuary. This network became known as the Underground Railroad. Code words were used to hide the activities of the escaped slaves and their supporters from the legal authorities. Stops along the route, as well as destinations in Canada bore colourful names. Cleveland was known as Hope. Port Stanley was known as God Be Praised. Detroit was known as Midnight and Windsor as Glory to God.

There was a song, learned by escaped slaves, called Follow the Drinking Gourd. The drinking gourd referred to the constellation of the Big Dipper which can be used to locate the north star, telling the slaves that they were traveling in the right direction to reach the Canadian border. 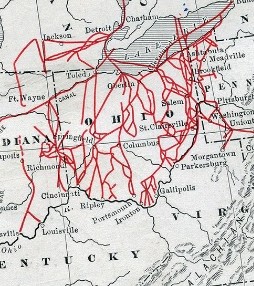 The following story, as told by Fred Landon in his book Ontario’s African Canadian Heritage, involves an abolitionist by the name of A.M. Ross who helped two slaves by the name of Peter and Polly (probably not their real names) escape to Port Stanley.

Peter told Ross that he had been separated from his wife one month after they were married, the woman being sold to a hotel keeper in Covington, and that he himself was likely to be sold down the river to Texas. He begged Ross to try and get them both to Canada. On the following Saturday night, Peter made good his escape, being aided by the compass and other necessaries supplied to him by Ross.

On the Friday, Ross went to Covington and put up at the hotel where Polly, the woman, was owned. The hotelkeeper told Ross that he had paid $1,200 for her but was inclined to grumble because she wouldn’t ‘take up’ with another one of his slaves. He promised her a good lashing if she didn’t give in and told Ross that he knew how to manage such. He would send her down to New Orleans, where she would bring $2,000 because she was ‘likely’.

Ross managed to get a word with the woman secretly and told her that her husband intended to run away, and that she was to make an effort to join him in Cincinnati. Ross promised to help her. He then went over the river to Cincinnati, but on Sunday night, at midnight, he crossed the river in a small boat, met Polly at a point agreed upon, and in an hour had her in Ohio. Putting the woman in a cab, they drove to a point near a friend’s home, then dismounted and entered the house by a rear door.

Ross told Polly that as soon as her husband arrived, they would both be sent on to Cleveland, where he would meet them and help them on to Canada. He accordingly went on to Cleveland to make further arrangements, and in a few days received word that Peter had arrived safely, though with badly torn feet.

A few days later, another letter reached Dr. Ross stating that freight car No. 705 had been hired to convey a box containing one package of “hardware” and one of “dry goods” to Cleveland. The key to the car was enclosed. The train, of which this car was part, was due in Cleveland on a Tuesday evening.

That morning, Dr. Ross drove into Cleveland from the home where he had been stopping just outside the city, and as he passed one of the chief hotels, who should be standing outside but the Harrodsburg farmer, the owner of Peter.

Ross made his way unobserved by the slaver, and went to the harbour, where, after a long search, he found a schooner loading for Port Stanley and sailing the next day, if the weather was favourable. The captain agreed to stow away the two fugitives and to carry them to Canada.

Toward night, Dr. Ross went to the freight depot and met the train bearing the precious shipment. He unlocked the door, went in, and closed the door after him. There was no sign of life, but he called in a low voice: “Peter.” The reply came at once. “Yes, massa, shall I open the box?” There were the two poor creatures, in a dry-goods box just sufficiently large enough for them to sit up in. They were helped out, placed in a closed carriage, driven to the harbour, and hidden in the schooner. After midnight, sail was made, and Port Stanley reached the following evening.

“When our little vessel was moored alongside the pier,” says Dr. Ross in his narrative, “I led my two companions on shore, and told them that they were now in a land where freedom was guaranteed to all. Two happier beings I never saw. We kneeled together on the soil of Canada and thanked the Almighty Father for His aid and protection. Next day I took them to London and obtained situations for both Peter and his wife.”

Several escaped slaves settled north of London in the area around Lucan.

If any readers can supply any additional names, please let us know.