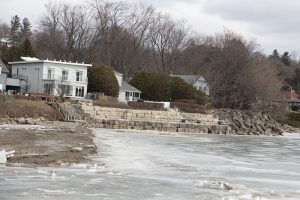 By Joe Konecny – (April 2019) Longevity is not a virtue on Lake Erie’s north shore.

With an annual average erosion rate of up to 2.2 meters, or about seven feet, Mother Nature is cutting a swath along the north shore as wide as 400 meters, or 1,300 feet, by the year 2115. It’s one of the highest recession rates on the Great Lakes.

Sediment flows to the east along the shore of Kettle Creek Conservation Authority’s (KCCA’s) watershed. Gravel and sand accumulate on the west side of the Port Stanley pier or other piers, groynes and jetties along the shoreline. Lands east of these structures experience increased erosion.

While Lake Erie’s relentless attack may be credited for blessing Port Stanley with Main Beach and its tourism wonders, it is also gobbling up farmland, fragmenting road networks, condemning buildings, forcing the relocation of utilities and messing with landowners’ property rights.

The 2015 Elgin County Shoreline Management Plan (SMP) identifies $34 million in primary and secondary buildings inside the so-called “100-year line” that are “presently at risk to erosion hazards.” Check out the SMP at http://www.kettlecreekconservation.on.ca/wp-content/uploads/2015/10/ElginCoSMP-2015.10.13.pdf. 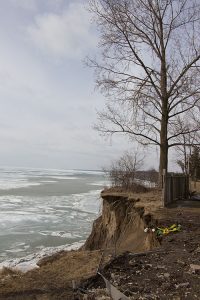 The SMP ultimately argues that any efforts to stop erosion of the shoreline – by building a wall, or revetment – for even one farm, would push erosion damage on to neighbouring properties, and even affect the continued viability of “downdrift” communities like Rondeau, or Long Point, which would ultimately be “starved” of sediments. The plan also contends that the cost to adequately defend the “high bluffs” shoreline from erosion would be far greater than the value of the properties protected. Port Stanley’s low bluffs shoreline is an exception.

So, the co-ordinated response to the onslaught of erosion promised by the SMP is mired not only in disagreement on how or whether to manage erosion, but also by a tangle of federal, provincial and municipal legislation, policies and regulations.

The red tape prohibits landowners to the east and west of Port Stanley, occupying “high bluff” properties, from building erosion control structures, at least within the KCCA watershed. Neighbouring watersheds are more lenient. CCCA, for example, recently approved construction of a revetment for a Dexter Line cottage community near Port Bruce. Red tape also prohibits high-bluff landowners from building new structures, or additions, or increasing the intensity of land use within the 100-year zone

In Port Stanley, the SMP defines the village’s sheltered waters as an important economic component of the local economy, with a long settlement history, as well as a high density of commercial and residential development, supported by roads and utilities, along the coast. While a large portion of Port Stanley lies within the 100-year line, the SMP spares the property rights of landowners here, and even permits construction and maintenance of revetments, under close KCCA supervision. The rights were grandfathered past the SMP conclusions because much of the waterfront development here is already protected with engineering structures, such as rock revetments, steel sheet pile walls and dumped concrete rubble. On the down side of owning a lakeside property in Port Stanley, anyone looking to build a new house with a basement on the waterfront must spend upward of $10,000 on the required geological engineering study, then some $250,000 to have an armour stone revetment built.