The Wreck of the Mineral State II

The last installment of this column dealt with the wreck of the three-masted, 140 foot long sailing schooner Mineral State which was caught in a late October gale as it was transporting a cargo of bulk coal across Lake Erie in 1902. 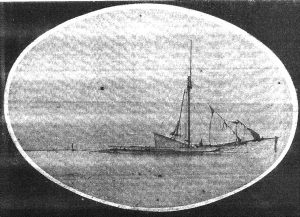 My telling of the story was left with the captain and crew clinging to the rigging of the wrecked vessel which had washed ashore just east of Port Stanley. They were rescued from there by the brave members of the Port Stanley lifesaving crew.

Agnes Hepburn in her Historical Sketch of the Village of Port Stanley tells us that the first lifeboat in Port Stanley was brought from England and shipped in a box car to Port Stanley. The nails used in its construction were made of copper to prevent rusting. A second lifeboat was brought from Collingwood. Hepburn does not give a date for when these boats were put into service, but she does tell us that in 1891 the lifesaving crew was captained by William Berry. In 1897 the American schooner Groton sank off Port Stanley. Its crew escaped in a yawl which was towed into harbour by the lifesaving crew. Berry received a lifesaving medal from the president on the United States for his part in that rescue. The medal can be seen hanging on the wall of the Port Stanley library. 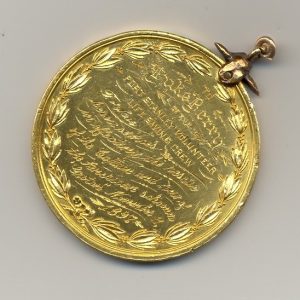 On Nov. 8, 1902, it was the crew of the Mineral State which required rescue. The account of this rescue warranted a front-page headline in London’s Western Advertiser. The headline reads, “Shipwrecked Seamen saved from Death’s Clutch.” The sub headline, in slightly smaller type, tells us that the schooner Mineral State, laden with six hundred tons of coal ran aground one mile east of Port Stanley and broke up in heavy seas. Her crew of six men were taken off by volunteer life savers, “At imminent peril of their lives.”

The Advertiser records that the schooner, “After a rough night and a rougher morning on the lake,” went aground just off the cliffs east of Port Stanley and began to break up at once. “So high was the sea,” the account says, “That it appeared certain death to attempt to gain the shore. The mate of the doomed vessel, however, successfully essayed the task and reached shore after a trying experience in the billows.”

The Mineral State’s Captain Zeim was interviewed by the newspaper and gives us more details, “Some of us were in the mizzen rigging and some on the cabin when she struck. We would not tie ourselves to the rigging as we did not know when the mast might fall and then we would have been either fouled by it and killed or else drowned.” The news that a wreck had taken place, the Advertiser says, “Was naturally productive of intense excitement in the pretty lakeside village which had just assumed its customary air of quietude after the departure of its summer guests. Business was generally suspended, the school was dismissed and practically the whole population hastened to the cliffs overlooking the spot where the laden schooner was going to pieces.”

Captain Ziem takes up the story.” About 1 o’clock when the sea was at its heaviest, the mate was so cold that he resolved to make the attempt to go ashore. I did not want him to go, as I thought he would not live to make the shore, but he was determined, so I told him to go and wished him Godspeed. We put one of the deck hatches overboard and gave him the deck broom for a paddle, and he set off, but he had not gone far when a wave turned the hatch over on top of him. He got out from under and managed to reach the shore. We saw them let down lifelines from the cliff and pull him up, about 100 feet or so. He was more dead than alive, but they put him in a buggy and hurried him to the hotel and filled him with whisky.”

The captain and 4 other crew members were still aboard. Captain Ziem continues the story. “About 5 o’clock, when the sea had abated a little but was still dangerously high we saw the tug Gordon Brown coming down to windward of us with the lifeboat in tow. By good management the crew of the lifeboat brought their staunch little craft to leeward of us. One by one we jumped and struck the boat. The crew of the boat were ready to seize us should any of us fall short, but we all jumped safety”.

The Mineral State and her cargo was a total loss, but the captain and her crew all survived their ordeal. “I want you to give that crew all the credit they deserve,” continued the captain. “They are brave fellows, and they risked their lives to save ours.” Agnes Hepburn reports that all the members of the life saving crew received life saving medals from the American government. Some of the present day residents of Orchard Beach recall seeing a very large chain buried in the sand about 500 feet east of the end of Harrison Place. Could this have been the anchor cable that Captain Ziem had to cut loose from his ship 118 years ago? If any of our readers has a kayak and a metal detector they might wish to go exploring.