The wreck of the Mineral State – Part 1

By Craig Cole
April 2020 – If you have seen the historical mural at the south end of Main Street you know about the wreck of the Mineral State which occurred 118 years ago just off the bluffs east of Orchard Beach. 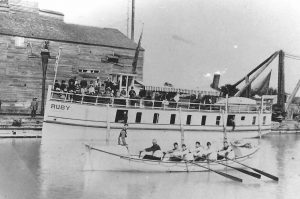 The Mineral State was a sailboat which was delivering a cargo of coal to the north shore of Lake Erie. In this day and age, the idea that coal would have been shipped in bulk in a sailing vessel seems almost unbelievable and to give the Mineral State her due, perhaps it would be better to refer to her as a three masted sailing schooner, 140 feet in length. She had been built in 1873, was registered in Alpena, Michigan, and was engaged in transporting coal across Lake Erie. Slightly over 600 tons of coal was in her hold for her fateful final voyage. She was transporting it from Cleveland, Ohio, to Rondeau, Ontario, for the Lake Erie and Detroit River Railroad, a company which for a time leased the tracks of the London and Port Stanley Railway.

On November 5, 1902 the story of the wreck of the Mineral State took up the entire front page of the Western Advertiser, a weekly newspaper published in London. The wreck had taken place the previous week. The front-page headlines tell the story.

Schooner Mineral State, Laden With Six Hundred Tons of Coal, Runs Aground One Mile East of Port Stanley, and Breaks Up in the Heavy Sea, Her Crew of Six Men Being Taken Off by Volunteer Life Savers at Imminent Peril of Their Lives

The Mineral State’s Captain Ziem was interviewed by The Advertiser, an interview which was reported in the Captain’s own words. “We loaded at Cleveland on Tuesday,” Ziem said, “and cleared on Wednesday evening with 620 tons of lump coal on board.

“The wind was light, blowing south by southwest, and the barometer was high, indicating southerly winds. We steered our course about due north, figuring on holding up enough to make a lee at Rondeau, where we were to unload. As we came along, the weather looked fair, and we shaped our course to fetch Point Talbot, 10 miles west of Port Stanley. The wind, however,
increased till it blew a gale. And the seas began to make so fast that we dare not haul her up for the Eau. I therefore decided to run for Port Stanley, much to my dislike, for Port Stanley is a bad port to make in a gale.”

Captain Ziem goes on to say that when they arrived at Port Stanley the sea was too high to attempt to make the harbour. He dropped his anchor in seven fathoms of water at a spot about two and a half miles south of the shore, hoping that the Mineral State could ride out the storm at anchor. This plan did not work out. “After we anchored,” Ziem said, “the seas increased in fury and the wind veered more to the southwest. The waves began to board us, and all the dunnage, planks and loose stuff around the decks were washed overboard.

So heavy were the seas that came aboard us that the men were unable to get around the vessel. Her hold started to fill with water. “I saw,” Ziem said, “that in order to save the lives of the crew we must slip our cable and beach the vessel on as good a beach as I could find.” The anchor was cut loose, but, “in a few minutes the wind blew the jibs to ribbons and threw the boat helpless into the trough of the sea.” After half an hour, the drifting ship, having no means of propulsion, came aground just east of what is now Orchard Beach.

The Advertiser said: “The captain paused here in his recital, as though his story had all been told. He had to be pressed to tell of the most dramatic part of the crew’s awful experience – the long hours spent in the rigging or on the wave swept decks, the escape of the mate who swam and drifted ashore with a life preserver on and the rescue of the remainder of the crew by the
brave men who volunteered to man the lifeboat.”

The Mineral State and her cargo were a total loss, but the Captain and her crew survived their ordeal. The lifeboat crew all received medals from American president Theodore Roosevelt for their part in the rescue.