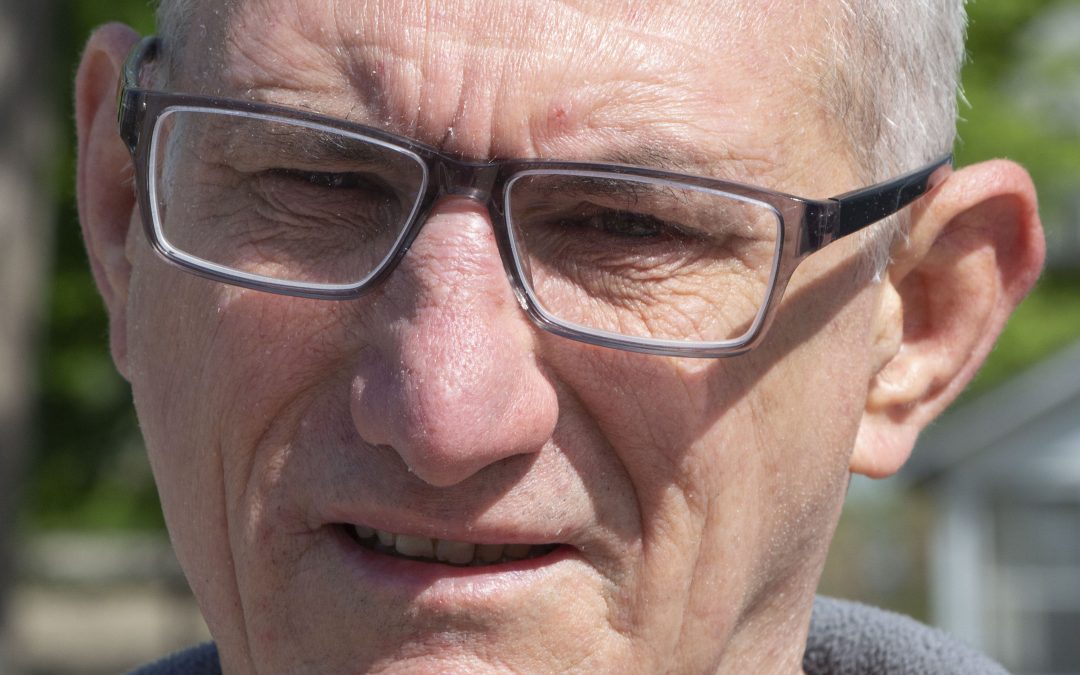 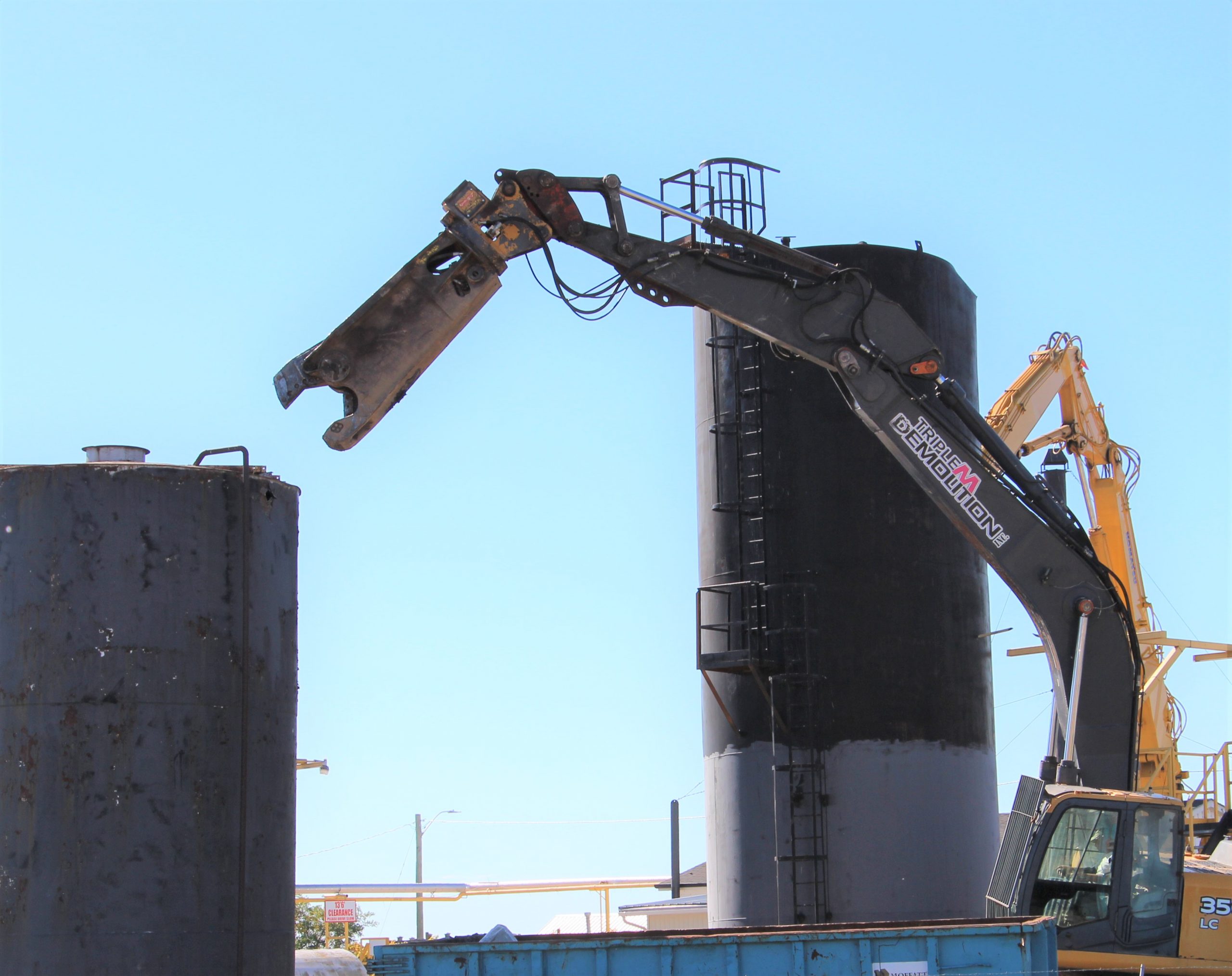 Activity on the McAsphalt site on the Port Stanley waterfront generated a buzz in the village today, as some of the hideous towers were torn down. According to Central Elgin, “They are demolishing old tanks that are no longer in operation. The large tanks are not part of the demolition and are still operational.” Beacon columnist Dan McNeil wrote about McAsphalt in May 2019. His words bear repeating now.

Asked what qualities a politician required, Former British Prime Minister Winston Churchill replied: “The ability to foretell what is going to happen tomorrow, next week, next month, and next year.  And to have the ability afterwards to explain why it didn’t happen.”

(May 2019) Many people have been bothering me with what I may know about the future of “those damned tanks.”  When I first became a Central Elgin Councillor in 2010, I was fairly adamant it was time to start planning the departure of “those tanks” between our beautiful village centre and our Blue Flag beach.  On Council, I was alone, I was even condemned.  People told me I was ‘against jobs’ and didn’t ‘realize how much tax came from that property’. (As it turned out, not much.)  On December 22, 2010 there was a huge spill on the property that received a lot of negative press.  One of the local stories that hit close to home was the number of stray cats that died and disappeared.  That began a fundamental turnaround in the attitude towards the tanks. 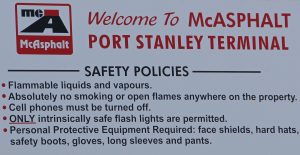 My article last month (April 2019) ended with words and thoughts about the importance of Ontario’s progressive environmental policies that produced our Environmental Bill of Rights (1994) and the Clean Water Act (2006).   These progressive policies were extremely important in forcing the federal Department of Transport to make the kind of investments necessary to produce the clean, vibrant village of Port Stanley today.  Ultimately, these laws have ensured our local water supply is safe now and into the future.

In the last nine years the operations at McAsphalt have had to be modified substantially to comply with Ontario’s new regulations and with Central Elgin’s ownership of the harbour front property.  The Kettle Creek Source Water Protection Plan came into force January 2015.  The plan instituted proscribed Intake Protection Zones (IPZ) for the Elgin Area Primary Water Supply System.  The IPZ is the area surrounding the domestic water intake pipe just east of Port Stanley.  Under the Clean Water Act, these IPZs have been identified on the basis of proximity (IPZ-1), time (IPZ-2), and “events” (IPZ-3).

The McAsphalt tanks are in IPZ-2.  The primary threat was the storage and movement of fuel and fertilizer that could risk our water intake within two hours of a significant spill.  The enforcement of these risk management measures has reduced McAsphalt’s operations today to the relatively benign movement of its main product, asphalt emulsions.  There are no longer any products on site that would threaten our water supply. 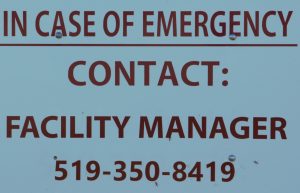 When Central Elgin took over the harbour in 2010, the municipality also took over a fuel transfer station on the waterfront that serviced the McAsphalt tanks.  McAsphalt has a separate Marine Division that operates two double-hulled barge and tug combinations that handle the difficult transfer of “hot-oil” throughout the Great Lakes.  These barges are relatively new, built in China, and draw 18 feet at full load.  After years of negotiation and discussion it was apparent that the mouth of the harbour could not be dredged sufficiently often and deep to meet their needs without local taxpayer input.  Several years ago, the transfer station disappeared.

Many locals will remember the largest tank, nearest the beach, was painted with a mural that somewhat muted the ugliness therein.  Most of that tank was on public property, therefore it is now gone.

The determining factors in the future of “those damn tanks” remains with McAsphalt and the municipality.  Corporations are allowed to contaminate their own property, even if it is in the middle of a residential area.  They are not permitted to allow the contamination to migrate off site.  Recently the corporation sent letters to local residents and the municipality (as a local land owner at risk) indicating that they are planning a departure.  The terms and conditions of that departure are the subject of corporate confidentiality.  That does not diminish the public accountability that rests with our local government.  As with the divestiture talks of a decade ago, the public should only put up with a certain level of secrecy before we demand some information and input.

As we progress with harbour planning, all of the projections, maps and charts, show the tanks are gone.  Some have suggested that ‘we’ simply appropriate the land.  That is the craziest of ideas.  As a concerned taxpayer, do you want to own the liability?  We must depend on our politicians to be informed, to be proactive and to get on with the job.