By Joe Konecny – (April 2019) Erosion’s impact on Elgin County is uneven and unfair.

Beyond the estimated average rate of the shoreline’s retreat, as outlined in the 2015 Elgin County Shoreline Management Plan (SMP), erosion may pause and leap forward without obvious reason or notice.

In Port Stanley, for example, erosion carves 3.7 meters (12 feet) per year from the shoreline immediately east of Orchard Beach. The experience on a strip of shore near Long Point is four-plus meters (13 feet plus) per year. Erosion on Grand Canyon Road was recently observed at 15-to-20 meters (up to 65 feet) in one and a half years.

“It’s hard to determine because there are so many factors that contribute,” said Joe Gordon, Assistant Manager, Supervisor of Planning and Conservation Areas, Kettle Creek Conservation Authority (KCCA). 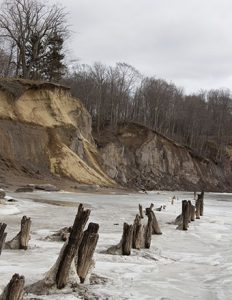 Erosion rates – monitored and measured using aerial photography – may be affected by wave action at the toe of the bluff, stability and steepness of bluffs, ground and surface water flows, as well as wind. High Lake Erie water levels, climate change, seasonal freeze-thaw-rain cycles, and runoff from intense downpours, can also play a role.

The impact of erosion is all around us. The alignment of Dexter Line was changed to avoid Lake Erie’s advance. The link between George Street and Grand Canyon Road vanished into the lake. Several homes and buildings along Dexter Line and Grand Canyon Road, as well as Barnum’s Gully, have been lost, as structures were condemned, and their occupants ultimately evicted.

Ask Earl Wilson. He lived at the lake end of Grand Canyon Road until the fourth child in his family arrived. KCCA refused his application to build an addition because he lives in the erosion hazard zone. “His family lived there for 11 years, including the final two years when the house was on the real estate market and eventually sold, under the asking price. A bunky next door had succumbed to erosion just before he moved to Wallacetown. “I miss the lake and the view.”

One homeowner on the eastern edge of Orchard Beach says his father lost about 25 acres of farmland since the ‘50s due to erosion. In fact, the lion’s share of an orchard after which the neighbourhood was named vanished in the depths of Lake Erie

Orchard Beach’s Walter McManus bought his waterfront property in 1976 and was fortunate that a revetment of concrete blocks was already installed. “Well, I’m not talking to you from under water. The wall is still there. It has been very effective.”

McManus’ neighbour Andrew Sloan isn’t intimidated by erosion. His revetments guard the family compound that he and his brother Robert maintain, with nearly 200 feet of lake frontage. His father George Sloan, an obstetrician and gynecologist from St. Thomas, bought the main house, a 150-year-old building, in 1965

The house fronts on Kitchener Avenue now, with the lake to the south, but in the ‘50s, there was another street south of Sloan’s house, with still another house on the south side of that street. The shoreline washed away, greatly helped by Hurricane Hazel. In fact, Sloan’s original family house was moved four times due to erosion concerns before his family bought it. Even so, Sloan loves the neighbourhood and is considering expansion of one building. “This is where my family spends its summers. There are a lot of good memories here.”

Many landowners are reluctant to speak about the multi-generational impact of erosion on their farms and homes, due in part to modesty, but also out of fear it may diminish property values.

“There are some people who care, there are some that don’t care about erosion,” said Carol Thompson, a Keller Williams Lifestyles Realty broker in Port Stanley who specializes in waterfront properties. “The people who don’t care, many are wealthy, without children, and they want the view, they want the peace and quiet. You might as well pick a place that will make you happy.” For the buyers who are concerned about erosion, Thompson said realtors are obliged to disclose it and frequently share the SMP.

SMP skeptics are still a force to be reckoned with. Kyle Cronk is President of the Lake Erie North Shore Landowners Association. He bought a 14-acre farm on Dexter Line in 2010. Cronk formed LENSLA a year after the SMP was announced. LENSLA now has 60 members and is looking to expand into Norfolk and Chatham. Cronk and the LENSLA membership refuse to accept the SMP determination to essentially let $34 million in primary and secondary buildings inside the 100-year line slip into the lake without a fight. 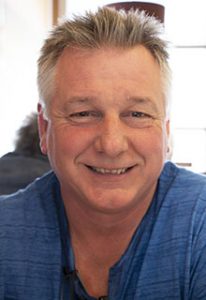 “I’m not angry. I’m frustrated,” Cronk said in a recent interview. “When LENSLA started out, we were deemed confrontational, but we were really just trying to protect our property rights.

“They scared everyone,” he added. “The conservation authority is very good at scaring everybody. They’re fear mongering.” LENSLA is now directing its energy toward educational programs and consulting. He collaborates with municipal politicians and other conservation authorities on the north shore, but not KCCA. “They took my retirement property away from me by prohibiting me from building a revetment,” he said. “It’s a double standard (with Port Stanley).”

Regulations enforced by conservation authorities require professional reports demonstrating a project’s compliance with standards for: flooding, erosion, dynamic beach, pollution and conservation of land. Next, the federal government has concerns and regulations about navigable waters, as well as protecting fish habitat. Provincially, the Ministry of Natural Resources maintains the Lake Erie bed as Crown land.

“Development is prohibited in areas that may be subject to eroision,” said Gordon. “We’re delegated with the responsibility from the Province, based on those rules.”

Land owners can apply to the Municipal Property Assessment Corporation and request tax relief for properties engulfed by the lake. Few do.

Rick Pineo sides with Cronk. “Over the last 50 years that I’ve been living and farming here, it’s been eroding about one foot per year,” said Pineo, a semi-retired tobacco farmer, with 38 acres on the south side of Dexter Line. “When people talk to me about erosion, my blood pressure goes up. It kind of devalues the property when there’s a negative there.”

His house was built in 1857 by Marwood Ashton and in some old family photographs, he can see the lake in the background. His home is still 180 feet from the bluff. “Do the math there. At a foot a year, I’m still pretty good for a day or two,” he added, only half joking.

Central Elgin Mayor Sally Martyn empathizes with LENSLA and understands members’ frustration, but she said there’s no arguing with the science. “It isn’t fear mongering. It’s fact,” said Martyn. “When they put that pier there, that’s how Port Stanley got its Main Beach. That’s how Orchard Beach disappeared. It’s called lateral drift. It moves from west to east on Lake Erie. You look at Port Bruce, same thing. Long Point is the same.

“We’re willing to listen and talk,” added Martyn. She too has concerns about the SMP stymying high bluffs landowners, and not Port Stanley residents, but Martyn notes that Elgin County is not the deciding authority. “I understand why people want to protect their property, but it is a natural process and while you can stop it, you can’t stop it forever.”