What can we learn from history?

(August 2018) – Port Stanley is a very changeable little village. What will it look like in the future? Will the Seaglass development on George Street add 900 people to our population? Will the harbour lands be transformed with high rise condos and row housing? Might the idea of turning the central area of the village into a Heritage Conservation District be revived? This writer has no idea, but change will come.

It is interesting to consider a seminal past event in the early development of our little village. 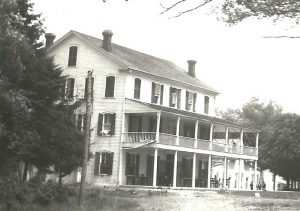 The year was 1871 and a large new summer hotel, The Fraser House, built by William Fraser, was about to open on the high bluff, overlooking a broadening beach on the west side of the village. This was by no means Port Stanley’s first hotel, but it was the first elegant summer hotel, and its construction was crucial to the development of the tiny village as a summer playground.

An advertising brochure, written by William Fraser in 1886 says, “This house is now open for the season of 1886, and is universally recognized as in all respects the most luxurious, elegant and best appointed hotel in Western Ontario. It is situated most pleasantly upon a lofty hill, commanding a magnificent view of the beautiful scenery surrounding it on every side and overlooking Lake Erie from a height of 150 feet. The air is always pure and exhilarating, the balmy breezes from the lake infusing a thoroughly delightful coolness around, while the lawns, walks and drives are most inviting.” Mr. Fraser, who also served as a conductor on the London and Port Stanley Railway, goes on to say, “The handsome dining room of the hotel has seating capacity for 200 guests, and the large new dining hall adjoining the House will accommodate 300 people”. 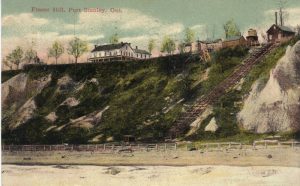 The hotel attracted many famous visitors from both Canada and the United States. Canada’s Prime Minister, Sir John A MacDonald is reputed to have been one of the guests, perhaps attracted by what was sometimes billed as the longest bar in the country. A newspaper article talks about, “A regular bar inside the hotel (which served) for ordinary day in and day out trade, but on holidays there were two barrooms – one inside the fenced grounds of the hotel where the aristocrats and the would-be aristocrats paid the top price for the high class drinks. Outside the fence was a long frame building with a bar from end to end where the great unwashed were served. A nickel a glass for either beer or whiskey, only the whiskey glasses were smaller. On big days like the Irish and Scotch picnics that bar was full all day – so were many of its patrons.”

Many American guests visited the Fraser House after enjoying a cruise across the lake on one of the various ferries which connected Cleveland to Port Stanley. Agnes Hepburn, who for many years in the last century taught at Port Stanley’s school, reports in her Historical Sketch of the Village of Port Stanley that the proprietor of the hotel was the brother in law of Annie Pixley, a noted American stage star who spent many summers at the Fraser House.

In 1907 The Fraser House was sold to the Erie Amusement Company and renamed the Invererie Hotel. Things never remain the same for long in Port Stanley, and in1917 the hotel was razed. Some of the wood from the old Fraser House was used to construct cottages below the bluff along what is now Edith Cavell Boulevard. Today, the area where the Fraser House once stood has been renamed Mariner’s Bluff. Port Stanley’s main beach below is unrecognizable to those of us who grew up on the Boardwalk and at the Stork Club.

I, for one, cannot wait to see what the future holds for our little village.