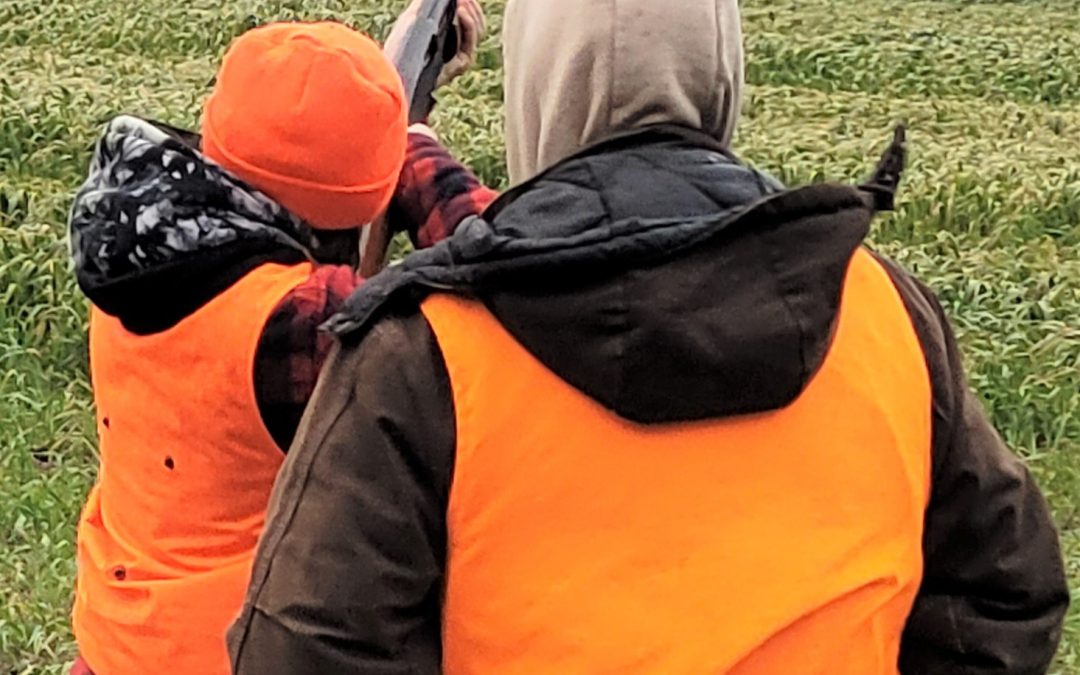 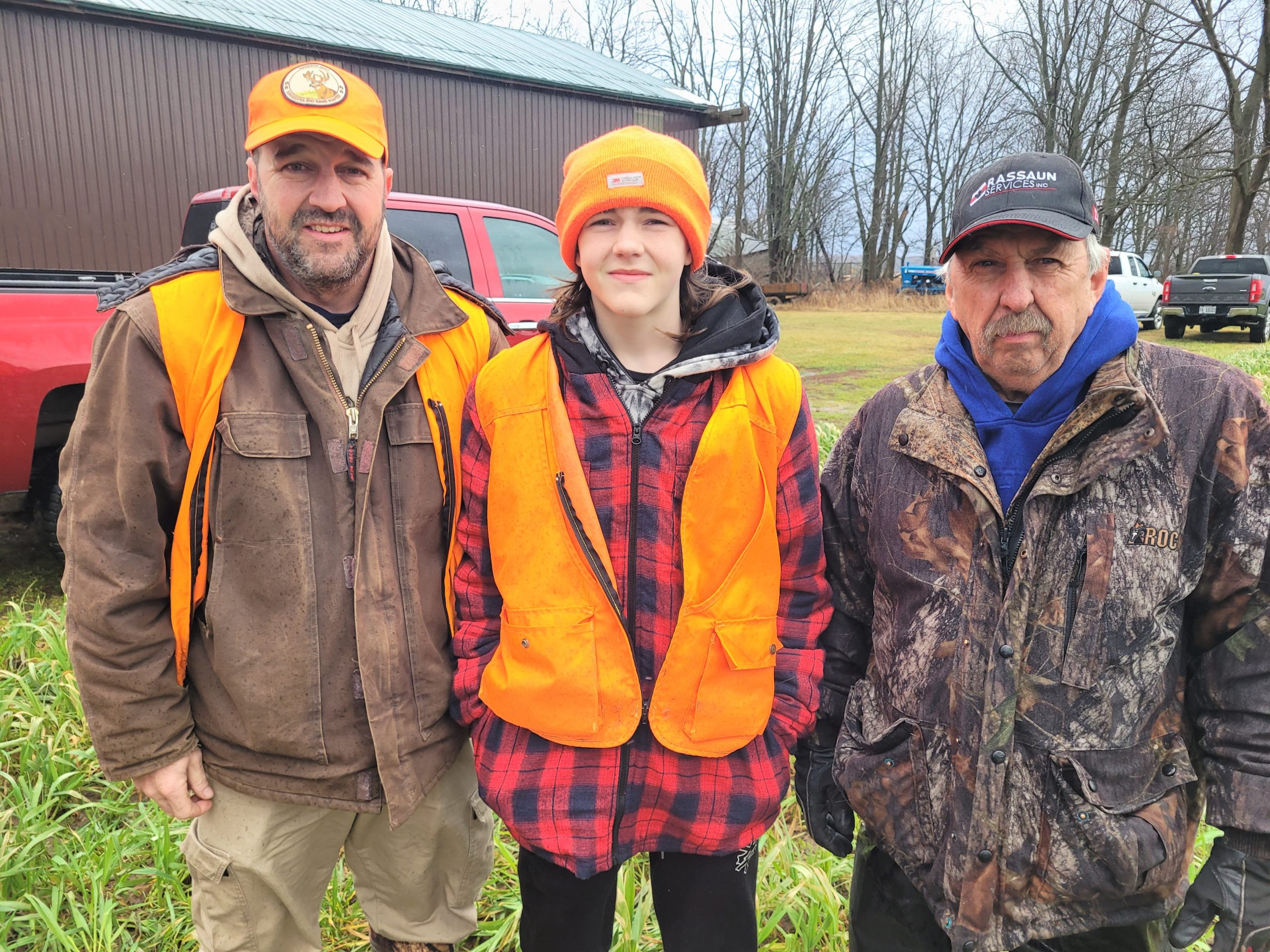 The Elgin Stewardship Council hosted it annual celebration of the county’s hunter-gatherer heritage on Saturday, Dec. 3.

The 17th Annual Youth Hunt Day at the Fingal Wildlife Management Area attracted 20 youths and a couple of novice adults who – in true outdoorsman fashion – braved the pouring rain and blustery conditions with their mentors to participate in a variety of hunting competitions, including a live pheasant hunt with dog handlers.

It was a finishing school of sorts, primarily for 12-to-15-year-olds who are part of the Hunter Apprenticeship Safety Program and who have also successfully completed the Ontario Hunter Education Course. Ammunition, trained dogs and a lunch were provided.

“The point of Youth Hunt Day is to pass on our hunting heritage to our youth,” said Tom Howe, 61, of Aylmer, an Elgin Stewardship Council Director. The volunteer council works collaboratively to provide environmental land stewardship opportunities and advice for county landowners.

One of Mr. Howe’s ambitions is to pass on to future generations the adventure and comradery of the outdoorsman lifestyle that he has enjoyed from an early age. 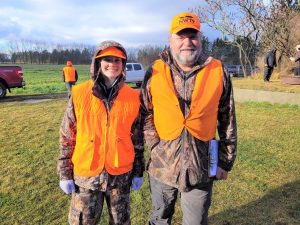 Maddy Ciglen, 18, is the embodiment of Howe’s dream. She served as a field marshal at Saturday’s Youth Hunt Day, mentoring four younger hunters.

“What this event does for me is bring my experience full circle,” said Mr. Howe. “That’s what Maddy is doing now. She’s got the potential to go on and teach thousands of hunters.

“That makes my heart big,” he added. “I get as much enjoyment watching these kids, as I get from hunting myself.” Maddy, who graduated with the Class of 2022 from Erin District High School, north of Brampton, was introduced to the sport at the age of four years, when her father invited her to go goose hunting.

“I love it (but) it was kind of ‘you’re coming with me, it’s what we do in this family’,” she said with a chuckle. “I like the fact that you’re in tune with nature. It’s a bonus when you get to harvest an animal.”

A love of nature, the pursuit of peace and quiet, and opportunities for family bonding are among the qualities that some young hunters reflect on when describing their attraction to the sport.

Most learned the concepts of gun safety, field-to-table hunting ethics, and wildlife population management from their parents or other family members.

“Always know where your gun muzzle is and never point it at anything that you’re not shooting at,” he added. “You can’t call the bullet back once it leaves your gun. Safety is paramount. Safety first, safety last, and safety always.”

“Today I came out to meet the kids and show them that it’s alright to speak with a field officer,” said Mr. Dimenna. “Law enforcement today does not have a friendly perception. I’m here to put a friendly face on the role. We’re here to be mentors and leaders.” 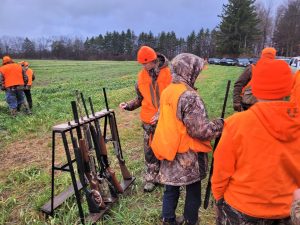 “I’ve always been an outdoorsman,” said Tim. “We all enjoy doing things in the outdoors. It’s time together. We only hunt what we can eat. It’s from field to table.

“My grandfather and my uncles hunted,” said Tim. “I started in my early 20s. I did things backwards and introduced my dad (Bob) to hunting. He got into hunting because it was something that I enjoyed. He just decided one day that he was getting his license and before you knew it, he was out in the bush more than I was.”

Tim provided Brody with his first gun management lessons when he was nine years old. “I’ve introduced my kids at a young age. It’s important. Then when they come of age, it’s much easier.” He takes great pride and care in teaching his kids about gun safety, gun handling and ethics. “It’s a lot of quality time together.”

Brody, a Grade 8 student at Lockes Public School, in St. Thomas, obviously relishes the “family hunts.” He said some of his best memories are rooted in deer hunting. “We get together and have a great time.” He particularly enjoys using muzzle-loaded, black-powder rifles every November in Fingal.

“My brother Brandon used to come (to the Annual Youth Hunt Day) when he was younger and I was always interested,” said Brody. “I’ve always been interested in hunting. I grew up with it.

“It’s the peacefulness that I like,” added Brody. “It’s very calming.” The Annual Youth Hunt Day has a special appeal. “I’ve been eating game my whole life (but) I’ve never had (cooked) pheasant before, and I would love to try it.”

The Fingal Wildlife Management Area is a Second World War air force training base on 724 acres of Crown land at Fingal and Scotch lines, in Southwold. It is co-managed by the Stewardship Council and the Ministry of Northern Development, Mines, Natural Resources and Forestry.

Each year over 200 ring-necked pheasants are released in Fingal for hunting. Small game hunting is permitted on Mondays, Wednesdays, Thursdays and Saturdays during appropriate seasons. Hunting for deer and wild turkeys is not permitted there at any time.

Access to the site hunters is through the south parking lot along Scotch Line where there are 10 marked parking spaces reserved for hunter.

Canada is a natural venue for hunters, anglers and trappers, with more than two million lakes and rivers, 30% of the world’s forest, and a vast terrain. A Conference Board of Canada survey of 25,571 people shows an estimated $18.9 billion was spent in 2018 on fishing, hunting, trapping, and sport-shooting activities, largely in Ontario and Quebec.

According to the Conference Board, there are 1.3 million hunters in Canada. Ontario hunters make up 33% of the national total. Hunting spending totaled $5.9-billion in 2018. Hunting supported 33,000 jobs and generated just under $2-billion in labor income. 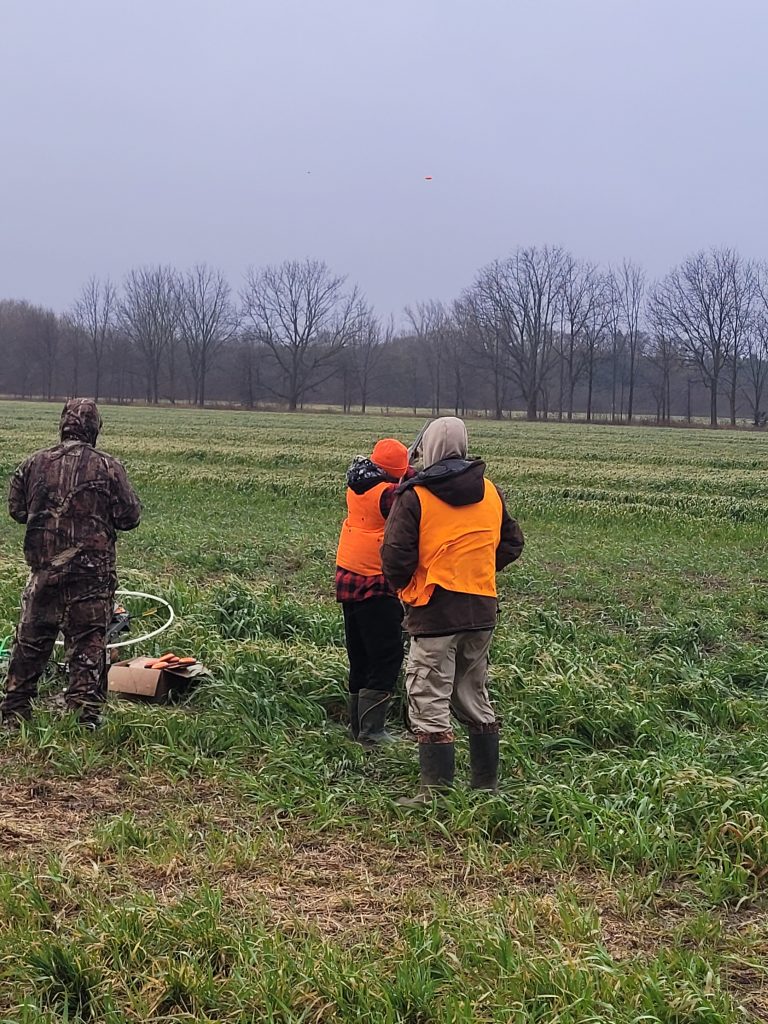